Even though Heather Graham still works fairly regularly, including a recurring role on NBC’s recent “Law & Order American Crime: The Menendez Brothers,” she hasn’t been on my radar for a while. So I was intrigued to learn that this big-eyed blonde—as nymph-like at age 48 as she was as Rollergirl in 1997’s “Boogie Nights”—is making her debut as a film director and writer. Hers is a timely topic, too, as the romantic comedy “Half Magic” takes a swing at the rampant sexism in the film industry as well as life in general. As one of the first among the parade of well-known actresses to speak out about disgraced movie mogul Harvey Weinstein’s serial sexual harassment and abuse, surely Graham must have an insightful and meaningful story to share.

But after sitting through this rather unpolished production as it lightheartedly bumbles its way around a serious subject, I mostly wished that I could un-see it. To say that “Half Magic,” in which Graham also stars, is half-baked would be kind. I don’t know when she dreamt up her screenplay, but it feels more than a little dated judging by the naiveté of its female leads when it comes to intimate relationships, considering that they are all well over 30. Haven’t they heard of “The Joy of Sex”? Even its depiction of movie-making feels more like straight-to-video cheeseball fare that was popular decades ago. And what is with all the rooftop establishing shots? Product placement for hotel signs perhaps?

The basic set-up is shaky from the start: Three adult women based in Los Angeles meet at a touchy-feely sexual empowerment gathering that requires participants to wear pink feather boas while praising aloud their various lady parts to one another. Their ringleader (played by Molly Shannon, summoning her “Saturday Night Live” cheerleading past), who extolls the virtues of her “pussy” by saying “pussy” a lot, is neither inspirational nor funny.

What bonds these fast friends, besides sketchy taste in feminist gurus, is a lack of self-esteem, a hunger for great sex and an unfortunate attraction to male jerks. Graham’s Honey is dating her boss, big-screen action hero and raging misogynist Peter Brock (Chris D’Elia). He compares his martyr-like existence as a Hollywood star to Napoleon and Christ’s travails with a straight though scruff-infested face. When he’s not demanding awkward quickies from Honey in public places, he regularly dumps on the scripts she has penned. Why? “No one wants to hear about women’s stories,” he yells. Not even her idea for a follow-up to his “Bros Before Hos”—titled “Chicks Before Dicks”—makes the cut.

Then there is Eva (Angela Kinsey, the tightly-wound accountant from “The Office”), a successful dress designer who resents that her painter ex-husband Darren (Thomas Lennon) left her for a college-age girl—especially after she paid his way through school when they were married. She still misses him, despite his propensity for “room-temperature sex.” Completing this unlucky-in-love trinity is Candy (Stephanie Beatriz of "Brooklyn Nine-Nine”), a unicorn enthusiast whose frequent sex partner is TED Talks enthusiast Daniel (Alex Beh). He might be anti-monogamy but fully supports Candy’s right to do his laundry.

The title’s magic reveals itself via Candy’s bizarre new-age beliefs as a self-proclaimed “hope-ologist.” She sells hand-carved candles in varying hues that, when lit, will make your wish come true. For Honey, who is consumed by a childhood of Catholic guilt, that means “having hot sex with someone who is really nice to me.” Her yearning is initially fulfilled by a free-spirited Aussie artist named Freedom, who has a Tarzan-like Jason Momoa thing going on. As for Eva, her desire is to “not fall asleep when I have sex.” Candy just wants to be a unicorn—whatever that means—and for Daniel to be faithful to her.

But Freedom’s bedroom gymnastics comes with drug-related baggage. Eva’s reunion with Daniel is a dud. And Candy still wants to be a unicorn. Another candle lighting finds the threesome making a pact “to be with good guys only, guys who treat us great like we deserve.” I thought they had already made that request, but whatever. As a result, Honey finally notices her nice bespectacled co-worker John (Michael Aronov), who constantly praises her. Eva runs into a Hemsworth-y buddy of Darren’s who has conveniently split from his wife (Jason Lewis, Samantha’s hot waiter beau on “Sex and the City”) and harbors a crush on her. Candy, the least-developed character, is still stuck with Daniel, but not for long.

“Half Magic” is a stumble backward in its cartoony portrait of modern-day womanhood. But I must give props to Kinsey, whose comic timing, amusing self-deprecation and grounded likability allows her to be the only cast member to come close to resembling an actual human being. That she somehow milks genuine laughs from one of the oldest of corny female clichés—a lonely binge-fest on wine, chips, pizza, red licorice and (of course) pints of ice cream while leaving countless and increasingly more inebriated messages on her ex-husband’s phone—is whole magic in action. 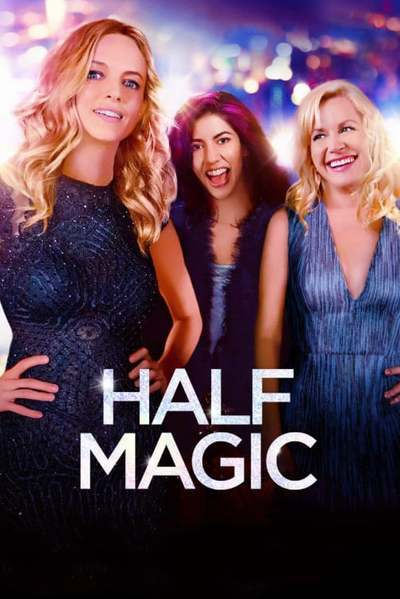