The Man Who Laughs

Movie villains smile so compulsively because it creates a creepy disconnect between their mouth and their eyes. Imagine, however, a good man, condemned to smile widely for an entire lifetime. Such a creature would be bullied as a child and shunned as an adult. "The Man Who Laughs" (1928), one of the final treasures of German silent Expressionism, is about such a man. His name is Gwynplaine. His father was a nobleman. Orphaned as a child, he is captured by outlaws who use a knife to carve his face into a hideous grin. Disfigured, alone, he rescues a baby girl, and together they are raised by a fatherly vaudeville producer. As adults, they star in the producer's sideshow and fall in love. Because she is blind, she does not know about his grin.

This story, set in 17th century England, was written by Victor Hugo, and made into one of the last (almost) silent films by Paul Leni, the director of "Waxworks" (1927) and "The Cat and the Canary" (1929). He was an art director who grew up in Germany during the era of Expressionism -- of films dominated by twisted sets and characters, harsh angles, deep shadows, careening staircases. He and his star, the great Conrad Veidt, two Jewish refugees, made the film for Universal in Hollywood.

The image of Veidt's face with its disturbing grimace became familiar to anyone who opened a film history, but the film itself was hard to find; I saw it for the first time at the Telluride Festival in 1998, where Peter Bogdanovich programmed a series from "Hollywood's Greatest Year." That was 1928, he said, when they had gotten silent films right and had not yet started to get sound films wrong. It was filmed just at the moment when Hollywood was uneasily experimenting with sound. Like many other films from the same year, it was conceived in silence and then a little sound was grafted on. The movie has no significant spoken dialogue but did have rudimentary sound effects, and the Kino DVD restoration includes a musical score, a song and some indistinct shouts during a mob scene.

"The Man Who Laughs" is a melodrama, at times even a swashbuckler, but so steeped in Expressionist gloom that it plays like a horror film. Everything centers on the extraordinary face of Gwynplaine, whose wide and mirthless grin inspired the Joker character in the original Batman comic books. Unlike the Joker and most villains who smile, however, he is a good and decent man, one so horribly aware of his disfigurement that he reveals it only on the stage, as a way to earn a living. The rest of the time he hides behind masks, scarves, handkerchiefs, or his own upturned arm. The blind girl, Dea (Mary Philbin), loves him, but he thinks that is only because she does not know his secret.

The buried story here is similar to Victor Hugo's far better-known novel The Hunchback of Notre Dame, which also has a grotesque loner in love with an innocent girl. Universal had a great success with that 1923 film, and with "The Phantom of the Opera" (1925), which also starred Mary Philbin as the woman in the arms of a disfigured hero; no doubt the studio had those films in mind when it went ahead with this one. Another connection was through the executive producer, Paul Kohner, who at one time ran Universal's operation in Berlin (barely escaping the Nazis), and knew Leni and Veidt in Germany.

Veidt's performance is far more than a stunt. Best known to modern audiences for his performance as the erect, unsmiling Maj. Strasser in "Casablanca," he appeared in more than 100 films, including the German silent landmark "The Cabinet of Dr. Caligari." He was one of a group of German refugees who might have made a great impact on Hollywood, had they lived. He was dead of a heart attack at 50, a year after "Casablanca." Leni died at 44, a year after the release of "The Man Who Laughs," and F.W. Murnau, director of "Nosferatu" and "Sunrise," was dead in 1931, at 43.

Veidt wore a makeup device that distended his mouth while supplying grotesque teeth. It was horribly uncomfortable, making it even harder for him to project emotions only with his eyes. And yet there are scenes where we sense love, fear, pity and lust, and an extraordinary scene (bold for the time) in which a shameless royal woman, the Duchess Josiana, attempts to seduce him. (In a note after a sideshow performance, she writes him: "I am she who did not laugh. Was it pity, or was it love? My page will meet you at midnight.")

Her interest is genuine, if perverse, although she has no idea where it will lead. He is tempted. In a way, he wants sex, which he has never experienced, and in another way, he wants to remain loyal to Dea -- and yet he will never have intimacy with Dea until he reveals his secret, and he fears she could not love him after learning it. His scene with the duchess has a disturbing power because as he (no doubt) thinks of these things, Josiana attempts to kiss him, and we sense that her attraction to his mouth is cruel or fetishistic. He does not want to be kissed -- or touched, or known -- there.

Oh, but the plot is much more complicated. Gwynplaine is in fact the rightful heir to a royal title and a stately home and lands which, inevitably, are now being enjoyed by Josiana. This is known to a jealous courtier, who wants to humiliate her by forcing her to marry Gwynplaine in order to remain a duchess. In a scene both pitiful and bizarre, the sideshow performer is brought to the court of Queen Anne, inducted into the House of Lords, and then ordered to marry Josiana. She agrees out of greed and probably fascination; he resists because he loves Dea -- and then the film grows truly melodramatic, with the intervention of a faithful wolf-dog named Homo, who grabs at Dea's dress and literally drags her into the action.

The film is more disturbing than it might have been because of Leni's mastery of visual style. In The Haunted Screen, her history of the German silent period, Lotte Eisner notes that the Expressionists often used unusually low ceilings and doorways in order to force their characters to walk stooped over or sideways. Their staircases rarely climbed frankly from floor to floor, but seemed to twist away into mystery. Dramatic lighting left much of the screen in darkness. Concealment and enhancement, not revelation, was the assignment of the camera. Eisner quotes Leni on the visual style of his "Waxworks," made four years before "The Man Who Laughs": "All it seeks to engender is an indescribable fluidity of light, moving shapes, shadows, lines, and curves. It is not extreme reality that the camera perceives, but the reality of the inner event..."

A film like "The Man Who Laughs" is of course so alien to modern moviegoers that it may repel those who can't accept it, while at the same time creating an eerie netherworld fascination for those who can. I find that sound pictures usually inspire a certain comfort level in the way they mirror, if not life, then the way life is perceived most of the time. Silent films, like black-and-white films, add by subtracting. What they do not have enhances what is there, by focusing on it and making it do more work. When images cannot be discussed, they must explain themselves; when no colors are visible, all colors are potential.

Watching the film again last night, I fell into a reverie, sometimes moved, sometimes amused, sometimes involved in a strange dreamlike way. By not alerting us with the logic of language, silent films can more easily slip us off into the shadows of fantasy. Remarkable, how a film like "The Man Who Laughs" refuses to declare its intentions, but freely moves from pathos to pity, from melodrama to true excitement, from cheerful horror elements to the dark stirrings of Josiana's desire, from easy laughter when the wolf-dog saves the day to -- well, to something very moving when the blind girl realizes the nature of her lover's secret. 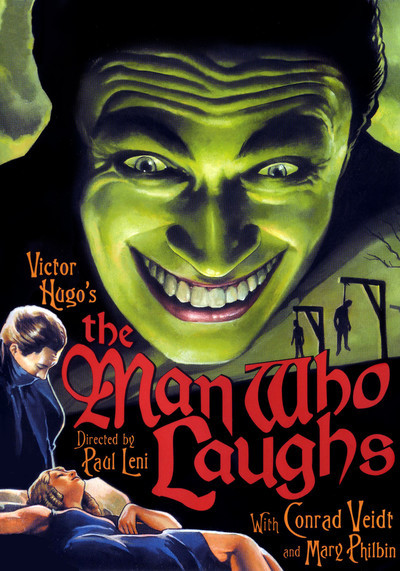