Sooner or later, everyone who loves movies comes to Ozu. He is the quietest and gentlest of directors, the most humanistic, the most serene. But the emotions that flow through his films are strong and deep, because they reflect the things we care about the most: Parents and children, marriage or a life lived alone, illness and death, and taking care of one another.

Yasujiro Ozu was born in 1903 and died in 1963, but his films were not widely seen outside Japan until the early 1970s, because he was thought to be “too Japanese.” He is universal; I have never heard more weeping in the audience during any movie than during his “Tokyo Story,” which is about children who in a subtle way are too busy to pay proper attention during a visit from their parents.

It is impossible to select Ozu's best film because his work is so much of a piece, and almost always to the same high standard. His stories usually involve two generations. They are family dramas, without violence. There are few scenes where the characters vent their emotions, and some of the most important decisions are implied, not said. He is wise about the ways we balance our selfishness with the needs of others.

For me, “Floating Weeds” (1959) is like a familiar piece of music that I can turn to for reassurance and consolation. It is so atmospheric--so evocative of a quiet fishing village during a hot and muggy summer--that it envelops me. Its characters are like neighbors. It isn't a sad story; the central character is an actor with a healthy ego, who has tried to arrange his life according to his own liking and finds to his amazement that other people have wills of their own. He is funny, wrong-headed and finally touching.

His name is Komajuro (Ganjiro Nakamura). He leads a traveling acting troupe that performs cut-rate kabuki in the provinces (“floating weeds” is a Japanese term for itinerent actors). His mistress Sumiko, played by the pretty and wise Machiko Kyo, is loyal to him, as are the other veteran actors, but it's clear that the troupe is failing. As the film opens, we hear the offscreen putter of an exhausted boat engine. Then we see the troupe on the boat deck, collapsed in the shade, fanning themselves, smoking. On shore, the troupe members fan out through the town, putting up posters and staging a ragtag parade (a little boy grows so excited he must dash away and pee against a wall). The theater owner gives them cramped living quarters upstairs.

Komajuro goes to visit a woman who runs a saki bar. Her name is Oyoshi (Haruko Sugimura), and years earlier she bore the actor's son. He is now a handsome young man named Kiyoshi (Hiroshi Kawaguchi), who works in the post office, and has been told that Komajuro is his uncle. The old actor is proud of his son, but embarrassed to admit his parentage; he wants to keep the secret. His mistress discovers the secret, is enraged, and sets a trap: She pays a pretty young actress (Ayako Wakao) to seduce the youth. The old actor of course doesn't want his son involved with a woman of (he well knows) easy virtue. His dilemma grows thornier when the two young people fall in love: How can he exercise authority without revealing the truth?

This material could be told in many ways. It could be a soap opera, a musical, a tragedy. Ozu tells it in a series of everyday events. He loves his characters too much to crank up the drama into artificial highs and lows. Above all we get a sense of the physical existence of these people, especially old Komajuro's physical weariness, as he settles down gratefully in the saki shop and lights a cigarette and looks around, pleased to have a moment for himself.

Ozu's scenes mirror the rhythms of ordinary life. He shows minor characters in desultory conversations; we learn much about the troupe from the gossip of the supporting actors. We see a performance before a sparse audience; the actors peer out through the curtain, counting the house and looking for cute girls. The performance desperately needs to be restaged with a fresh eye and perhaps a more interested cast.

Ozu doesn't dart from one plot point to another. He uses his famous visual style to allow us to contemplate and inhabit the action. The camera is always a little lower than the characters; when they are seated on tatami mats, it is only a few feet from the floor. This brings a kind of stature to their ordinariness. Between scenes, he often cuts to “pillow shots”--two or three quiet compositions, showing an architectural detail, a banner in the wind, a tree or the sky.

His camera never moves. No pans. No tracking shots. There are not even any dissolves; just cuts between one composition and the next. This is very contemplative. We are prompted to look and involve ourselves, instead of simply reacting.

Ozu is known for violating the traditional rules of visual composition. He often composes a conversation so that the characters don't seem to be looking at each other. I think I know why. With alternating over-the-shoulder shots, the audience is required to identify with the point of view of one character and then the other. When Ozu shoots them both looking in the same direction, we are kept outside the conversation; we can regard them objectively, and leave them their privacy.

His shots are direct, but often beautiful. Notice the way he handles an argument between the old actor and his mistress. The camera does not move. They are on opposite sides of a narrow street. It is raining in between them. She walks back and forth with a red umbrella. Break this up into dramatic closeups, and you'd shatter it. The space and rain between them is the visual counterpoint to their feelings. (And perhaps, passionate as they are, neither one wants to get wet.)

The movie's music, by Kojun Saito, is lilting and nostalgic. For some reason it always reminds me of the music in “Mr. Hulot's Holiday”; both soundtracks evoke the feeling of summer in a village near the sea, where the heat and the quiet have created a kind of dreamy suspension of the rules.

Ozu made 54 films, starting with silents in 1927 and continuing until “An Autumn Afternoon” the year before he died. He worked with the same actors and technicians again and again. In “Tokyo Ga,” Wim Wenders' documentary, both his cameraman Kazuo Miyagawa and the veteran actor Chishu Ryu weep when they remember him. He was a small, quiet, chain-smoking man who never aimed for an international audience, and who was content to tell domestic stories with small variations. Less than a dozen of his films are available in the West on video (and only “Floating Weeds” is also on laserdisc). But films such as “Tokyo Story,” “Late Spring,” “Early Spring,” “Early Autumn” and “An Autumn Afternoon” are available, and to look at any Ozu film is to glimpse the whole.

“I have formulated my own directing style in my head,” he once said, “proceeding without any unnecessary imitation of others.” By “others” he did not mean his contemporaries. He meant the entire cinematic language going back to D.W. Griffith. He fearlessly “crosses the line,” moving his camera through 360 degrees so that props on one side of the screen seem to leap to the other side. He violates all the rules about matching eyeline shots.

He once had a young assistant who suggested that perhaps he should shoot conversations so that it seemed to the audience that the characters were looking at one another. Ozu agreed to a test. They shot a scene both ways, and compared them. “You see?” Ozu said. “No difference!”

Ozu was most Japanese in taking similar materials and working them again and again in subtly different ways, always in his own style. Like the Japanese printmakers of earlier centuries, he disliked novelty, and preferred variations on a theme. When you see his films, you feel in the arms of a serenely confident and caring master. In his stories about people who live far away, you recognize, in one way or another, everyone you know. 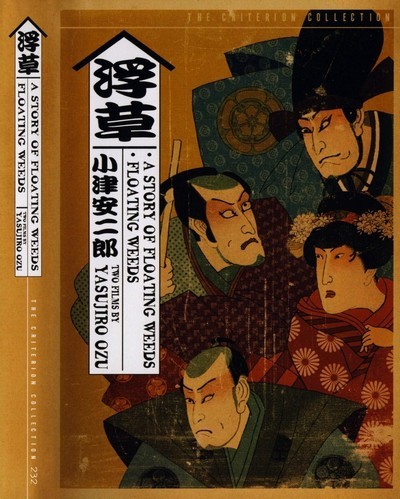