In form, "12 Angry Men" is a courtroom drama. In purpose, it's a crash course in those passages of the Constitution that promise defendants a fair trial and the presumption of innocence. It has a kind of stark simplicity: Apart from a brief setup and a briefer epilogue, the entire film takes place within a small New York City jury room, on "the hottest day of the year," as 12 men debate the fate of a young defendant charged with murdering his father.

The film shows us nothing of the trial itself except for the judge's perfunctory, almost bored, charge to the jury. His tone of voice indicates the verdict is a foregone conclusion. We hear neither prosecutor nor defense attorney, and learn of the evidence only second-hand, as the jurors debate it. Most courtroom movies feel it necessary to end with a clear-cut verdict. But "12 Angry Men" never states whether the defendant is innocent or guilty. It is about whether the jury has a reasonable doubt about his guilt.

The principle of reasonable doubt, the belief that a defendant is innocent until proven guilty, is one of the most enlightened elements of our Constitution, although many Americans have had difficulty in accepting it. "It's an open and shut case," snaps Juror No. 3 (Lee J. Cobb) as the jury first gathers in their claustrophobic little room. When the first ballot is taken, 10 of his fellow jurors agree, and there is only one holdout--Juror No. 8 (Henry Fonda).

This is a film where tension comes from personality conflict, dialogue and body language, not action; where the defendant has been glimpsed only in a single brief shot; where logic, emotion and prejudice struggle to control the field. It is a masterpiece of stylized realism--the style coming in the way the photography and editing comment on the bare bones of the content. Released in 1957, when Technicolor and lush production values were common, "12 Angry Men" was lean and mean. It got ecstatic reviews and a spread in Life magazine, but was a disappointment at the box office. Over the years it has found a constituency, however, and in a 2002 Internet Movie Database poll it was listed 23rd among the best films of all time.

The story is based on a television play by Reginald Rose, later made into a movie by Sidney Lumet, with Rose and Henry Fonda acting as co-producers and putting up their own money to finance it. It was Lumet's first feature, although he was much experienced in TV drama, and the cinematography was by the veteran Boris Kaufman, whose credits ("On the Waterfront," "Long Day's Journey into Night") show a skill for tightening the tension in dialogue exchanges.

The cast included only one bankable star, Fonda, but the other 11 actors were among the best then working in New York, including Martin Balsam, Lee J. Cobb, E. G. Marshall, Jack Klugman, Jack Warden, Ed Begley and Robert Webber. They smoke, they sweat, they swear, they sprawl, they stalk, they get angry.

In a length of only 95 minutes (it sometimes feels as if the movie is shot in real time), the jurors are all defined in terms of their personalities, backgrounds, occupations, prejudices and emotional tilts. Evidence is debated so completely that we feel we know as much as the jury does, especially about the old man who says he heard the murder and saw the defendant fleeing, and the lady across the street who says she saw it happen through the windows of a moving L train.

We see the murder weapon, a switch-blade knife, and hear the jurors debate the angle of the knife wound. We watch as Fonda imitates the shuffling step of the old man, a stroke victim, to see if he could have gotten to the door in time to see the murderer fleeing. In its ingenuity, in the way it balances one piece of evidence against another that seems contradictory, "12 Angry Men" is as meticulous as the summation of an Agatha Christie thriller.

But it is not about solving the crime. It is about sending a young man to die. The movie is timely in view of recent revelations that many Death Row convictions are based on contaminated evidence. "We're talking about somebody's life here," the Fonda character says. "We can't decide in five minutes. Supposing we're wrong?"

The defendant, when we glimpse him, looks "ethnic" but of no specific group. He could be Italian, Turkish, Indian, Jewish, Arabic, Mexican. His eyes are ringed with dark circles, and he looks exhausted and frightened. In the jury room, some jurors make veiled references to "these people." Finally Juror No. 10 (Ed Begley) begins a racist rant ("You know how these people lie. It's born in them. They don't know what the truth is. And let me tell you, they don't need any real big reason to kill someone, either...") As he continues, one juror after another stands up from the jury table and walks away, turning his back. Even those who think the defendant is guilty can't sit and listen to Begley's prejudice. The scene is one of the most powerful in the movie.

The vote, which begins as 11-to-1, shifts gradually. Although the movie is clearly in favor of the Fonda position, not all of those voting "guilty" are portrayed negatively. One of the key characters is Juror No. 4 (E. G. Marshall), a stockbroker wearing rimless glasses, who depends on pure logic and tries to avoid emotion altogether. Another Juror No. 7 (Jack Warden), who has tickets to a baseball game, grows impatient and changes his vote just to hurry things along. Juror No. 11 (George Voskovec), an immigrant who speaks with an accent, criticizes him: "Who tells you that you have the right to play like this with a man's life?" Earlier, No. 11 was attacked as a foreigner: "They come over and in no time at all they're telling us how to run the show."

The visual strategy of the movie is discussed by Lumet in Making Movies, one of the most intelligent and informative books ever written about the cinema. In planning the movie, he says, a "lens plot" occurred to him: To make the room seem smaller as the story continued, he gradually changed to lenses of longer focal lengths, so that the backgrounds seemed to close in on the characters.

"In addition," he writes, "I shot the first third of the movie above eye level, shot the second third at eye level and the last third from below eye level. In that way, toward the end the ceiling began to appear. Not only were the walls closing in, the ceiling was as well. The sense of increasing claustrophobia did a lot to raise the tension of the last part of the movie." In the film's last shot, he observes, he used a wide-angle lens "to let us finally breathe."

The movie plays like a textbook for directors interested in how lens choices affect mood. By gradually lowering his camera, Lumet illustrates another principle of composition: A higher camera tends to dominate, a lower camera tends to be dominated. As the film begins we look down on the characters, and the angle suggests they can be comprehended and mastered. By the end, they loom over us, and we feel overwhelmed by the force of their passion. Lumet uses closeups rarely, but effectively: One man in particular--Juror No. 9 (Joseph Sweeney, the oldest man on the jury)--is often seen in full-frame, because he has a way of cutting to the crucial point and stating the obvious after it has eluded the others.

For Sidney Lumet, born in 1924, "12 Angry Men" was the beginning of a film career that has often sought controversial issues. Consider these titles from among his 43 films: "The Pawnbroker" (the Holocaust), "Fail-Safe" (accidental nuclear war), "Serpico" (police corruption), "Dog Day Afternoon" (homosexuality), "Network" (the decay of TV news), "The Verdict" (alcoholism and malpractice), "Daniel" (a son punished for the sins of his parents), "Running on Empty" (radical fugitives), and "Critical Care" (health care). There are also comedies and a musical ("The Wiz"). If Lumet is not among the most famous of American directors, that is only because he ranges so widely he cannot be categorized. Few filmmakers have been so consistently respectful of the audience's intelligence. 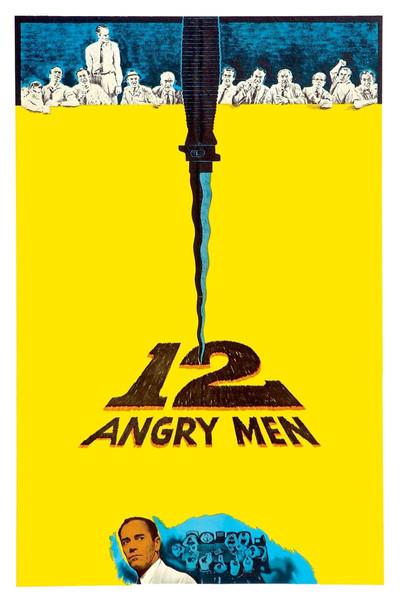