There is a moment in "The Verdict" when Paul Newman walks into a room and shuts the door and trembles with anxiety and with the inner scream that people should get off his back. No one who has ever been seriously hung over or needed a drink will fail to recognize the moment. It is the key to his character in "The Verdict," a movie about a drinking alcoholic who tries to pull himself together for one last step at salvaging his self-esteem.

Newman plays Frank Galvin, a Boston lawyer who has had his problems over the years - a lost job, a messy divorce, a disbarment hearing, all of them traceable in one way or another to his alcoholism. He has a "drinking problem," as an attorney for the archdiocese delicately phrases it. That means that he makes an occasional guest appearance at his office, and spends the rest of his day playing pinball and drinking beer, and his evening drinking Irish and looking to see if there isn't at least one last lonely woman in the world who will buy his version of himself in preference to the facts.

Galvin's pal, a lawyer named Mickey Morrissey (Jack Warden) has drummed up a little work for him: An open-and-shut malpractice suit against a Catholic hospital in Boston where a young woman was carelessly turned into a vegetable because of a medical oversight. The deal is pretty simple. Galvin can expect to settle out of court and pocket a third of the settlement - enough to drink on for what little future he is likely to enjoy.

But Galvin makes the mistake of going to see the young victim in a hospital, where she is alive but in a coma. And something snaps inside of him. He determines to try this case, by god, and to prove that the doctors who took her mind away from her were guilty of incompetence and dishonesty. In Galvin's mind, bringing this case to court is one and the same thing with regaining his self-respect - with emerging from his own alcoholic coma.

Galvin's redemption takes place within the framework of a courtroom thriller. The screenplay by David Mamet is a wonder of good dialogue, strongly seen characters and a structure that pays off in the big courtroom scene - as the genre requires. As a courtroom drama, "The Verdict" is superior work. But the director and the star of this film, Sidney Lumet and Paul Newman, seem to be going for something more; "The Verdict" is more a character study than a thriller, and the buried suspense in this movie is more about Galvin's own life than about his latest case.

Frank Galvin provides Newman with the occasion for one of his great performances. This is the first movie in which Newman has looked a little old, a little tired. There are moments when his face sags and his eyes seem terribly weary, and we can look ahead clearly to the old men he will be playing in 10 years' time. Newman always has been an interesting actor, but sometimes his resiliency, his youthful vitality, have obscured his performances; he has a tendency to always look great, and that is not always what the role calls for. This time, he gives us old, bone-tired, hung-over, trembling (and heroic) Frank Galvin, and we buy it lock, stock and shot glass.

The movie is populated with finely tuned supporting performances (many of them by British or Irish actors, playing Bostonians not at all badly). Jack Warden is the old law partner; Charlotte Rampling is the woman, also an alcoholic, with whom Galvin unwisely falls in love; James Mason is the ace lawyer for the archdiocese; Milo O'Shea is the politically connected judge; Wesley Addy provides just the right presence as one of the accused doctors. The performances, the dialogue and the plot all work together like a rare machine.

But it's that Newman performance that stays in the mind. Some reviewers have found "The Verdict" a little slow moving, maybe because it doesn't always hum along on the thriller level. But if you bring empathy to the movie, if you allow yourself to think about what Frank Galvin is going through, there's not a moment of this movie that's not absorbing. "The Verdict" has a lot of truth in it, right down to a great final scene in which Newman, still drinking, finds that if you wash it down with booze, victory tastes just like defeat. 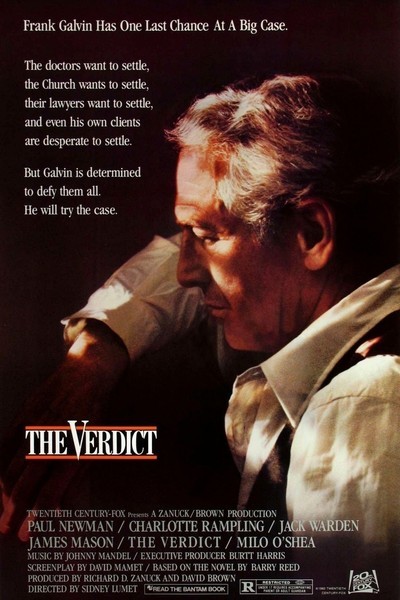