“Grandma” is a modestly scaled character comedy-drama that winds up exerting an almost shockingly strong emotional force by the end. I walked into a screening of the film a mild skeptic, and I left nearly in tears, and grateful for where writer-director Paul Weitz and a remarkable cast led by Lily Tomlin took me.

Written and directed by Paul Weitz, whose well-intentioned but spotty track record (prior films include “Admission,” “Being Flynn,” and “About A Boy,” which for me ran a gamut from mildly enjoyable to actively irritating) was part of what lowered my expectations, “Grandma" opens with Tomlin’s character, Elle, an aged poet with a strong feminist cult rep, apparently, being super unpleasant to Olivia (Judy Greer), the younger girlfriend she’s dumping. Left alone in her house, she sits in a commencement cap and gown looking over old photographs; the shutting out of Olivia, the viewer can infer, isn’t the only loss Elle has recently suffered. Turning up at the door is Elle’s curly-headed, gaminesque granddaughter Sage (Julia Garner). Sage is in a non-gaminesque predicament: pregnant, broke, and scheduled to have an abortion in about eight hours.

Why Sage hasn’t gone to her own mom, from whom Elle is somewhat estranged, why Elle herself only has about forty bucks available at the moment, why Elle and Sage set out in a perhaps-not-impeccably maintained vintage Dodge: all these are questions answered in ways that are best actually seen, rather than described in a review. I really didn’t think Weitz had this kind of screenplay in him. It’s incredibly literate—the movie actually has more pertinent things to communicate about both the inner and outer life of a writer than the unfortunately-much-bruited “The End of the Tour” does—and amusingly literary, with one character dropping the word “solipsist” as an epithet in a funny argument scene. He divides the scenes as chapters, with their titles typed in lower case on a simulation of fine bond paper. Sage and Elle get to know each other better, even as Elle can’t get over the fact that her granddaughter’s never heard of "The Feminine Mystique." But Elle’s politics and aesthetics get shaken up at the same time as their quest for cash begins “rattling the skeletons” of the characters’ respective pasts.

At the outset I was kind of concerned that the movie was making a point of evoking Elle’s counterculture values the better to caricature them for comedic purposes. But no. The movie examines those values, not entirely uncritically, but it also largely ends up affirming them, particularly with respect to women’s rights. One of the film’s most striking scenes, titled “the ogre,” finds Elle, who’s lived as a lesbian for longer than her granddaughter’s been alive, meeting up with an old acquaintance, Karl, played by an initially genial Sam Elliott. The scene’s almost a pocket history of the 1960s—its glories and its foibles. And Elliott gives a performance that sets the movie on emotional fire. It’s absolutely spectacular stuff. By the time this scene turns up, it’s clear that this movie is not one that seeks to use the one-time edginess of Tomlin’s comedic persona as a repository for sentimentality, but rather to set it afire and let it burn. This is a much neater film than those in which Tomlin worked with director Robert Altman, but its commitment to emotional truth is as strong as any Altman movie you could name. And it holds true to that commitment with the introduction of Sage’s mom, played beautifully by Marcia Gay Harden.

Is this a political movie? Well, in the United States, any movie in which abortion is treated as a standard medical procedure performed by trained and concerned medical professionals as opposed to Something Not Done, or a Traumatic Life Ruining Moment, is by definition a political movie. For that reason alone the movie will attract controversy; it approaches women’s self-determination without even the vaguest hint of apology. I don’t want to set the comments section on fire but I’ve got to say I’m entirely sympathetic to this perspective. But the politics—including the way the movie doesn’t just “pass” the “Bechdel Test” but gets 100 on it—are only a part of this really special movie. The other part is, yes, the humanity. The way the movie shows the toll taken by bonds sundered, and the healing made possible by bonds that are restored, however tentatively. And there’s also humor, and plenty of it. While brief in running time, “Grandma” is a small movie that doesn’t feel slight. 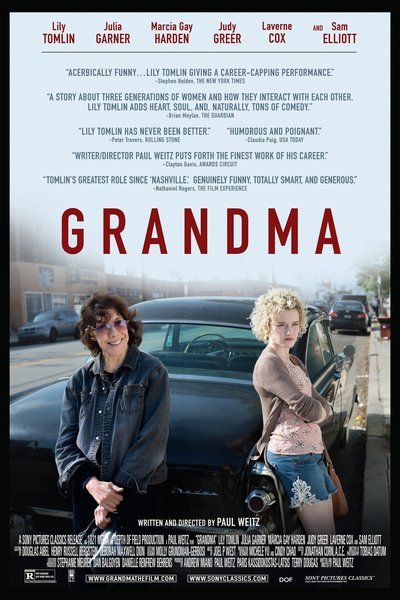