Has Tiny Fey ever played a character we weren't rooting for?

In smart features such as “Mean Girls,” “Baby Mama” and “Date Night,” on the just-completed NBC series “30 Rock,” on “Saturday Night Live” and in her book “Bossypants” or even co-hosting the Golden Globes, Fey's either likable or lovable. We're on her side, through all her pratfalls and fashion faux pas and quick, self-deprecating quips.

That’s pretty much how it goes for most of the journey in the blandly titled, disappointingly flat “Admission.” Then the wheels fall off and you suddenly think: I don’t know if I like this person.

That’s strike one against this film. Unless you’ve got Tiger stripes coursing through your veins, how much interest will you have a in film that makes it seem like getting into Princeton is second only to gaining admission into heaven? Are we really supposed to feel bad for the 17-year-old who doesn’t get into Princeton and instead has to “settle” for Duke or Michigan? This is hardly “Lean on Me” territory.

Still, even though Portia’s got that yawn-inducing, elitist job, we love her. We’re rooting for her as she travels the slick, intermittently entertaining, surface road traveled by many a romantic comedy. Portia is surrounded by the requisite cast of colorful supporting players, including Michael Sheen as a pompous ex-boyfriend whose new girlfriend is expecting twins; Gloria Reuben as Portia’s rival for a promotion; Wallace Shawn as her boss; and a wonderfully acerbic Lily Tomlin as Portia’s hardcore feminist mom, who’s part philosopher and part survivalist, living deep in the woods, wielding a shotgun and saying the dogs can hunt down and consume their own food.

But then comes strike two. Some stuff happens in the film’s third act that makes us stop in mid-cheer for Portia and even consider rooting against her. Why would we support someone who would do THAT? (I’ll say no more, knowing I’ve already provoked the ire of some movie fans who believe even revealing the title of a movie should be prefaced with “SPOILER ALERT!”)

Unlucky in love, struggling at work, so averse to children she’s practically allergic to them, Portia is incredibly ripe for romance with a good guy. (It’s almost as if she’s starring in a Sandra Bullock movie.)

Enter the low-key genius Paul Rudd, he of the quirky one-liner and the pitch-perfect comedic read of nearly every line he’s ever uttered on screens big and small.

He’s the almost too-good-to-be-true John Pressman, who runs the progressive New Quest school, which is populated by a group of highly intelligent, super-serious and arrogant little bleeps who try to make mincemeat out of Portia’s rah-rah Princeton recruiting speech, only to have the tables turned when she points out they’re not exactly going to change the worlds of medicine, law, politics and finance without, you know, advanced degrees.

When John’s not encouraging independent thought at New Quest, he’s traveling the world on goodwill missions. This man is so awesome, he even brought back a kid from one of those missions and is now raising the boy as his own. Whataguy!

Even though the following developments are revealed in the trailer and advance press materials: SPOILER ALERT!

John is convinced that one of his students, the eccentric but sweet Jeremiah (Nat Wolff), is actually the son Portia secretly gave up for adoption when she was in college. She keeps that information to herself while doting on the kid, which makes her seem more like a cougar on the prowl than his mother, which she may or may not be. Once Portia’s convinced she is Jeremiah’s mom, her behavior goes from smothering to — well, that was the stuff I was talking about earlier. Of course we expect our lead character is going to make mistakes, but Portia’s actions are so out of left field and so … wrong, she loses us.

Helmed by Paul Weitz, who’s at least partially responsible for some of my favorite gems of the last 15 years (including “About a Boy” and “In Good Company”), “Admission” has some sublime moments, most of them involving Fey and Rudd dancing around their inevitable romance. The problem is in the foundation. No doubt there’s a film to be made about the intense pressure to get into a top-tier college and the adults who have made it their lives’ work to be the gatekeepers of the process, but that seems more like dramatic fodder than the launching point for a great comedy. Then there’s that problem with Portia, who’s basically likable and then not so likable, and then we’re asked to be happy for her at the end, but she hasn’t given us enough good reason. If there were an admissions test, we’d send Portia packing. 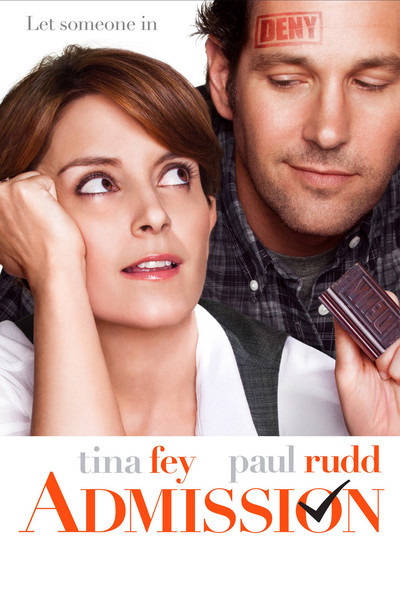 Rated PG-13 for language and some sexual material