Godzilla: King of the Monsters

“Godzilla: King of the Monsters” has a sense of wonder. After I left the screening late at night and emerged onto a dark city street at nearly one a.m., I wanted to look up rather than straight ahead, just in case Ghidorah the three-headed dragon or Rodan the giant pterodactyl came screaming down from the clouds. That's not the same thing as saying this is a perfect movie. It's far from that. But its errors fall mainly under the heading of failing to get out of its own way, and its imperfections are compensated by magnificence.

Directed and cowritten by Michael Dougherty ("Krampus"), the movie follows on the heels of the 2014 "Godzilla" and the 2017 "Kong: Skull Island." It's conceived as part of a shamelessly Marvel-styled "shared cinematic universe" of stories that interlink and build towards a series of peaks (the first of which is 2020's "Godzilla vs. Kong"). The human heroes are part of a top-secret project called the Monarch Initiative. This mythology re-imagines Godzilla and the other giant monsters made famous by Toho studios, including Ghidorah, Rodan, Mothra, and King Kong (an American creation folded into Japan's universe) as part of an ancient ecosystem of long-hibernating giant monsters that predate the dinosaurs. They can travel from one part of the globe to the other quickly via tunnels through the center of the planet (this is what's known as "Hollow Earth theory") and are emerging now in response to humanity's despoiling of the environment through atomic testing, nuclear and chemical waste-dumping, mountaintop demolition mining, and other assaults on Mother Earth.

This Hollywood-financed American series is an internationalization of original Toho Studios-produced Godzilla pictures, with a correspondingly international cast, all representing different takes on the monster problem, such as it is. There are appearances by characters from the 2014 film, including a couple of Monarch monster specialists played by Ken Watanabe and Sally Hawkins, but the main characters are a fractured nuclear family, consisting of two Monarch project scientists, Doctors Mark and Emma Russell (Kyle Chandler and Vera Farmiga) and their teenage daughter Madison ("Stranger Things" star Millie Bobby Brown). They lost the fourth member of their family, Madison's older brother, five years earlier during Godzilla's battle with the MUTOs in San Francisco, and the parents ultimately separated. It soon becomes clear that their split was equally due to grief and a philosophical disagreement over how to deal with Godzilla and his ilk—the father thinks they should all be exterminated, while mom believes they can be manipulated through a special sonar device that mimics the dynamics of whale songs.

At least that's our impression of the mother, but everyone in the family (and by implication, everyone on the planet) is dealing with the monster problem in their own powerfully emotional way, and some are secretly or not-so-secretly destructive in their coping. The openly destructive contingent is defined by Charles Dance's Colonel Alan Jonah, a former British Special Forces veteran turned eco-terrorist. Although the US military (represented by David Straithairn's admiral Stenz) insists that Jonah is a war profiteer looking to extract and sell monster DNA to hostile governments, Jonah is a radical ideologue, a true believer who thinks the monsters are punishment for humanity's sins against the environment and is working to awaken as many as possible, the better to hasten the thinning of the human herd. As revealed early in the film (as well as in all the teasers and trailers), Emma is on board with Jonah's take on things, and actively participates in waking up the creatures—including Ghidorah, a lightning-spitting dragon who represents the only serious threat to Godzilla's position as the Hollow Earth's boss predator.

One of the film's fascinations is the way it treats the monsters as outward manifestations of the characters' personal issues, at times like enormous doppelgängers or golems representing their grief and trauma. But in addition to showing empathy for the personal pain being experienced by individuals, "King of the Monsters" is suffused with grief for what might be the eventual death of human civilization itself, which is a scientific certainty if we don't turn our environmental act around over the next century or so, starting immediately.

Jonah and Emma are quite explicit (too explicit; this is a talky film when it's not blowing stuff up) in their belief that humanity has, via inattention and greed, become bystanders in the drama of its own extinction—and that we might as well go ahead and speed things up with help from Godzilla, Ghidorah and company, since that's what the planet needs, and what humans deserve. Emma even compares human civilization to a virus, and the monsters to a "fever" that could wipe most of it out and restore biological balance. A sort of compacted TED Talk in the middle of the film even reveals that once the monsters have finished fighting, and depart the ruins of a city, the radiation they leave behind acts as a biological accelerant, activating the rapid growth of plant and animal life that all the concrete, glass and steel once restrained or destroyed.

But at what price balance? That's the big question, the Thanos of it all. The great Ghidorah—frozen in a wall of ice in deep underground in an Antarctica-based Monarch facility, and looking like the biggest, baddest art installation of all time—is this film's equivalent of the extinction-level threat, the fever bomb fated to burn through the human virus. Dougherty and his army of designers and special effects people do a great job of building up Ghidorah as if he (it?) is an ancient and unstoppable evil force whose name fills the heart with dread, even envisioning him as a Voldemort-like threat, the dragon whose name can't be spoken (he's also called Monster Zero, shades of Patient Zero) and whose true image must be altered or distorted, as if to picture him precisely is to summon him. (A selection of past artwork allegedly depicting Ghidorah includes William Blake's painting The Great Red Dragon and Woman Clothed in Sun, also a fixture in Hannibal Lecter stories).

Gareth Edwards' franchise-starting "Godzilla" was a huge international hit, but divided viewers because of its flat, action figure-like characterizations, its meticulous, almost "Jaws"-like unveiling of Godzilla and the two Massive Unidentified Terrestrial Objects (MUTOs) that he ended up fighting, and its relative dearth of actual Godzilla footage (about seven minutes). The movie also placed the big fella within the larger ecosystem of wolves and snakes and birds and such. It contained more nature footage than you expected to see in a city-stomping kaiju epic, to the point where you half-expected Terrence Malick shots of honey-tinted fields and perhaps a narration by Godzilla ("Fire ... water ... why do you wrestle inside me?"). There were fears (among those who loved the original) and hopes (among people who hated it) that future movies would offer less philosophizing and atmospheric indulgences and more footage of giant monsters beating the tar out of each other, and the Vietnam-era period piece "Kong: Skull Island" delivered plenty, pitting the now super-sized ape against a series of Lovecraftian giants that seemed to be half-insect, half-demon, and making sure that the story didn't go five minutes without a burst of violent spectacle.

"King of the Monsters" tries to blend the two approaches, not always successfully, and it suffers from its inability to trust the audience to understand both the substance and implications of the action that it presents so boldly onscreen. While the core trio of Chandler, Farmiga and Brown acquit themselves well, and often inject genuine notes of affection and anguish into their scenes, the sheer number of supporting characters, some intriguing but many more forgettable, prevents the movie from focusing on a fantastical domestic drama that theoretically could've been the equal of the central stories of "Close Encounters of the Third Kind" or "The Babadook." Too many characters seem intended to explain (allegedly) complex plot points in plain language or crack wise during tense moments, serving as cliched "audience surrogates," in the degraded spirit of the ones that used to infest American horror and science fiction films in the nineties and early aughts. (Bradley Whitford's character, a doctor working for the Monarch folks, is the most annoying of the lot; the character seems to think he's starring in his own solo spinoff of "Mystery Science Theater 3000.")

The monster cast is overpopulated as well. Like the too-hurried rollout of the future Justice League members in "Batman vs. Superman," we don't really have time to appreciate the personalities of the supporting monsters the way we do Godzilla, Ghidorah, Rodan and Mothra—though the latter is at the center of many of the movie's most breathtaking images, such as a mural-like shot of the transformed creature unfolding its glowing wings behind the translucent curtain of a waterfall.

All that being said, purely at the level of craft, this is a frequently astounding movie—a succession of miracles and cursed disasters, unfurled onscreen with dazzling showmanship and over-scaled grace notes, from the way Rodan bites off a fighter jet’s nose cone like a hawk beheading a sparrow, to the shot of Godzilla shimmy-swimming towards the display window of an undersea research lab while flashing his spine-light to intimidate would-be challengers, to the way Ghidorah's heads screech and growl at each other, and at times even abuse each other, like the Three Stooges treating slaps as the continuation of conversation. (The middle head is Moe, the other two are Larry and Curly.)

For all its crash-and-bash action, this is a real science fiction movie that goes to the trouble of not merely creating a world, but thinking about the implications of its images and predicaments. It cares what the people in it must feel and think about their situation, and how it might weigh on them even when they aren't talking about it. It's also suffused with a spiritual/theological awareness, and takes it as seriously as recent DC films took their comparisons of caped wonders to figures from the Old Testament and ancient mythology.  A friend who saw this movie with another friend told me that afterward, they debated which of the monsters most resembled Jesus, and realized they could make an equally convincing case for several of them.

There are times when the movie's determination to be both a real science fiction film and a religious picture puts it at odds with itself, like a two-headed pop-intellectual kaiju. But at other times the impulses merge beautifully, especially in kitschy images like the shot of Ghidorah atop an erupting Mexican volcano, its necks and heads snaking in triumph while an enormous crucifix looms in the foreground. (It's like something you'd have seen on the cover of a 1980s heavy metal album, by a band looking to trigger parents who believed Dungeons & Dragons was a gateway to Satan worship.)

The constant need to summarize and annotate every significant moment grows wearisome (it's like being stuck watching a game with sportscasters who don't know when to shut up), but at the level of image, sound and music, "Godzilla: King of the Monsters" is a frequently brilliant film that earnestly grapples with the material it presents, and a religious picture about faith and spirituality, sin and redemption, where monsters die for our mistakes so that humankind won't have to. It deploys state-of-the-art moviemaking tools to try to return audiences to a stage of childlike terror and delight. Arthur C. Clarke observed that any sufficiently advanced technology is indistinguishable from magic. This movie is magic. 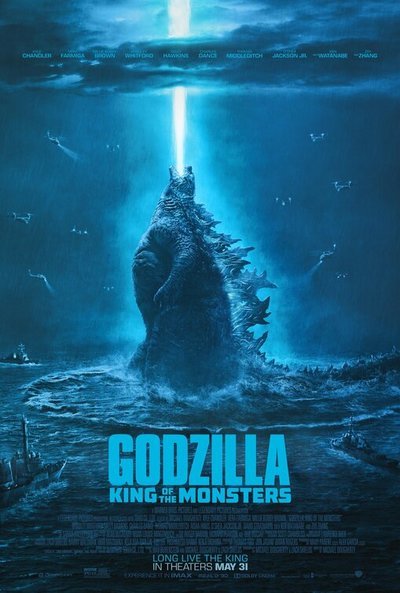 Rated PG-13 for sequences of monster action violence and destruction, and for some language.