As those of you who have either an encyclopedic knowledge of obscure holiday traditions or easy access to Wikipedia know, Krampus is a figure from European folklore with origins stretching back to the days before Christianity who is essentially the evil twin of jolly Saint Nicholas—while Nick rewards the good children with present and ribbon candy and such, he would be charged with punishing the bad ones for their misbehavior in various nasty ways. It would appear that Krampus has now aligned himself with a force even darker and more malevolent than himself—a Hollywood agent—because this year has seen him as a part of not one but two major films. In the anthology horror film "A Christmas Horror Story," he went after an especially unpleasant family one grim Christmas Eve and even did battle with Santa Claus himself. Now he takes front and center in the new horror-comedy hybrid "Krampus" to show both another family and the multiplex crowds what can happen if they should dare to lose faith in the holiday spirit.

As the film opens, a nice and normal family—harried parents Tom (Adam Scott) and Sarah (Toni Collette), mildly cynical teen daughter Beth (Stefania LaVie Owen) and Max (Emjay Anthony), a pre-teen boy who still believes wholeheartedly in the season—are bracing themselves for the arrival of Sarah's sister, Linda (Alison Tolman) and her family, a grotesque bunch of loud and abrasive gun nuts and Pittsburgh Steelers fans that include a loutish husband, Howard (David Koechner), a cranky aunt (Conchata Ferrell) and several nasty cousins who pick on Max for still believing in Santa. When they steal his letter to Santa and read it aloud, a humiliated Max is convinced that the holiday is ruined and rips the note to shreds and tosses it outside into the wind.

Almost instantly, a freak blizzard crops up that cuts off the heat, electricity and phone and seems to leave the group completely isolated. To make matters creepier, some strange-looking snowmen mysteriously appear in the backyard. Finally, Beth ventures out in order to visit her boyfriend, and when Tom and Howard go out to look for her, they are attacked by some creature burrowing under the snow. After they return home and endure a couple of additional attacks, Tom's elderly mother (Krista Stadler) explains the legend of Krampus and her own personal encounter with him when she was but a child. From there on, the once-fractured family is forced to come together in order to fend off an extended siege from such nasty creatures as demonic dolls, hellacious harlequins and evil elves, all of which are mere opening acts to an appearance from the big bad himself.

"Krampus" was co-written and directed by Michael Dougherty, whose previous effort was another holiday-based horror film, the cult favorite "Trick 'r Treat." In the same way that earlier film paid homage to such classics as "Tales from the Crypt" and "Creepshow" with its anthology format, this film constantly bows at the altar of "Gremlins," the Joe Dante classic that managed to find the perfect blend of creepiness, subversive humor and genuinely earned sentiment, to make it a seasonal favorite for viewers who prefer their Christmas entertainment to have a little more bite to it. "Krampus" tries to work along those same lines but never quite manages to hit the same heights. Although there are some amusing moments here and there and a couple of nicely effective scary bits, it is never quite as darkly funny nor as frightening as it would like to be—this is no doubt in part of the bizarre decision to release it with a more family-friendly PG-13 rating (even though no sane parental units would deem it to be acceptable viewing for the wee ones) instead of the R that it was probably designed to get in the first place. The story also meanders quite a bit, especially in the first half, before finally settling down to the business at hand—this is the kind of story that might have been more effective as a lean and mean hour-long "Tales from the Crypt" episode than as a 98-minute movie that takes a long time to finally kick into gear.

Despite the occasional rough patches, there are still some things about "Krampus" that I did like quite a bit. Although the humor is not always successful, I liked the fact that Dougherty played the material in a relatively straight manner and resisted the urge to go for a more campy approach throughout. Along those same lines, I admired how actors like Scott, Collette and even Koechner went about their roles with as much seriousness as one could possibly muster while rassling toothy clown dolls and armed and dangerous gingerbread men. The flashback in which the grandmother (Krista Stadler is excellent throughout) recounts her childhood memories of Krampus is conveyed via an animated interlude that is beautiful and haunting in equal measure. Although Dougherty's decision to shoot most of the attacks in quick closeups don't always allow viewers to get good looks at the various monsters on display, the glimpses that we do get are mighty impressive. Finally, without giving anything away, I will note that the film manages to wrap things up on a note that is almost ridiculously perfect.

In the grand scheme of holiday-related films of note, "Krampus" is neither as creepy as "Love The Coopers" nor as sadistic as "Home Alone" and it feels as if it is maybe one or two rewrites away from being the alternative classic that it clearly wants to be. It still has its charms—certainly more than one might expect based on Universal's decision to release it without any advance press screenings—and just enough things going for it to warrant a mild recommendation. Besides, do you think I want to get on the bad side of Krampus by panning his movie? I may be naughty but I am not stupid. 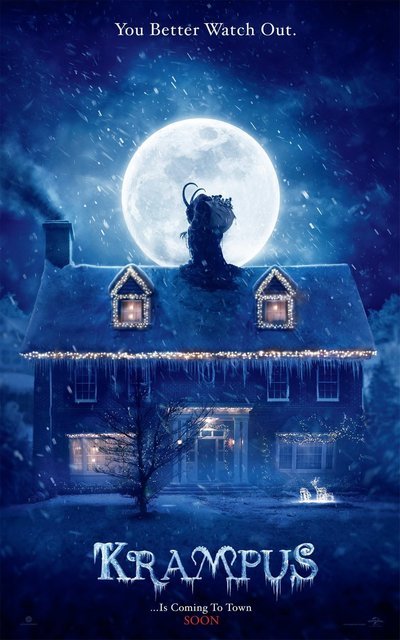 Rated PG-13 for sequences of horror violence/terror, language and some drug material.