“God’s Creatures” is yet another movie about a mother realizing too slowly that her son may be a dangerous sociopath. Screenwriter Shane Crowley’s thin characterizations do little to make this tired trope worth revisiting, instead opting to shroud the film in mystery regarding its central crime. The mother in question, Aileen O’Hara (Emily Watson) immediately sets up an alibi for her son, Brian (Paul Mescal) before she has any details of the crime he’s accused of committing. This either makes her an accessory or delusional. It would be an insult to call her protective; you’d be willing to believe your kid’s an incontrovertible angel at 5, but at 35, not so much.

When the film opens, Brian has returned to his unnamed Irish island homeland after being gone seven years. He was in Australia, but his parents didn’t know that information. His disappearance without a trace appears to have been written off by his father, Con (Declan Conlon), who barely shakes his hand when they’re reacquainted. His sister, Erin (Toni O’Rourke) is more welcoming, hugging him and quickly reestablishing their sibling bond. Aileen is at first surprised at his return, but immediately becomes committed to keeping him on the island.

Brian is so one-dimensional that the audience has no choice but to assume he’s guilty. Jumping back into his old role trapping oysters, he illegally raids more established farms for profit. The fact that he was gone all this time with no family contact gives the impression his exit was not under the saintliest of circumstances. His only “good” quality appears to be a way to communicate with his usually unresponsive grandfather Paddy, played by veteran Belfast actor Lalor Roddy. Paddy is used here as a symbol of the patriarchal streak that rules the island, so we can barely etch that tick mark in the positive column on the blackboard.

Brian’s alleged victim is Sarah Murphy (Aisling Franciosi). As in “The Nightingale,” Franciosi plays a character with an angelic singing voice. Directors Saela Davis and Anna Rose Holmer showcase Franciosi's skills early on as she sings a love song, a precursor to the very effective scene later in the film where they isolate it from a chorus of singers. It’s implied that Sarah and Brian were once an item (“her mother joked that we were going to be in-laws,” Aileen says). So, when Brian is accused of rape, the men on the island don’t take Sarah’s claims seriously. She becomes persona non grata on the island, and not just with the men.

“Don’t you want to hear her side of the story?” Erin asks her mother. Aileen does not, opting to live in the bubble that her son is innocent. My question is why? What does she know that we don’t, and why won’t the movie share it with us to inspire doubt? I kept reading Aileen’s delusion as something more sinister, though Watson does her best to try to show the scales falling from her character’s eyes. Even worse, Sarah’s anguish is given short shrift by the constant focus on Aileen’s journey. Again, this is the screenplay’s fault. Both actors do more with a glance and a silence than this movie deserves.

The true MVPs of “God’s Creatures” are the sound department and cinematographer Chayse Irvin. The former does a lot of symbolic heavy lifting, filling the soundtrack with the constant clatter of oyster shells colliding as they fall from the fisherman’s traps or the conveyor belts where the island’s women sort them. The noise unites these two job roles determined by gender while simultaneously creating an oppressive background din that envelops the viewer in a claustrophobic grip. The peaceful sounds of sea waves occasionally shatter the discordance of the oysters, providing a hollow respite.

Irvin’s cinematography captures every lush inch of the Irish landscape, juxtaposing its beauty with the harsh lighting used in the factory scenes. There’s also a nice shot where the camera isolates Aileen in a darkened bar where a mean, sexist slight has just occurred. Most impressive is a long, silent take shot from the passenger seat of Sarah’s car. As she drives, we get a full lay of the land from her window. As the view changes, Franciosi’s face subtly registers change of its own. Irvin draws our eye to both elements.

Mescal is so good in the upcoming “Aftersun” that it’s disheartening how little he has to do here. O’Rourke makes a nice, realistic counterpoint to Watson, especially in an understated scene where she basically says “woman, have you not eyes?” to her mother. Ultimately, nothing can save “God’s Creatures” from a paper-thin version of a story done numerous times before and better. We’re just waiting 100 minutes for the other shoe to drop, and it drops slowly. However, Aileen’s ultimate act of self-awareness might provoke discussion among viewers who found this film more compelling than I did.

“We’re all God’s Creatures in the dark,” Sarah says early in the film. That’s a pretty quote, especially when delivered in a lovely Irish lilt. But it’s an empty platitude, a series of words strung together in a sentence that sounds nice but reveals its hollowness upon inspection. That’s a perfect metaphor for “God’s Creatures.” 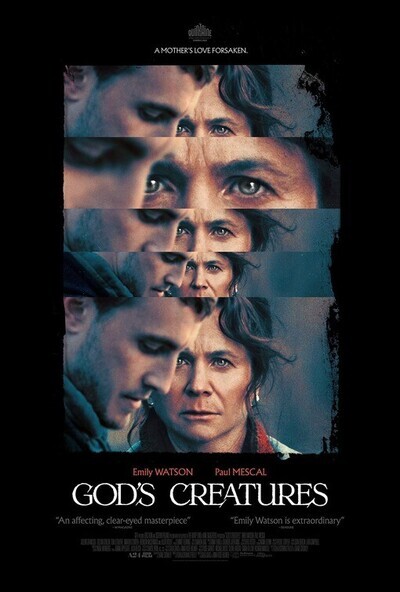