Full disclosure, right off the top: I have been to a lot of Fun Mom Dinners. In fact, I’m usually the one who organizes them—along with Thursday night Paint and Sips and Sunday morning Yoga and Mimosas. It’s how the sorority girl in me manifests herself now that I’m a grown woman.

So I am exactly the target audience for “Fun Mom Dinner,” about a group of ladies who get together for shenanigans on a school night. I’m also a fan of the strong, comic cast, including Katie Aselton, Toni Collette, Molly Shannon, Adam Scott, Rob Huebel and Paul Rudd. But this combination of predispositions makes the movie even more of a letdown.

Director Alethea Jones and screenwriter Julie Rudd (as in wife-of-Paul) unearth some nuggets of truth here and there in their first feature film. And they have a clear affection for these mothers who struggle daily to maintain the tricky balance of also being wives/friends/leaders/volunteers/independent women on their own terms. But too often, the script finds them immersed in uninspired, female versions of the kind of raunchy, R-rated adventures that are normally the domain of male-centric comedies.

It begins with some promise, though, as we meet the four disparate moms whose kids go the same preschool. Collette’s Kate staggers barefoot in the dark over a Lego-strewn rug as she struggles to find a quiet place to catch a little more sleep. A mother of four (who’s married to Huebel’s Andrew), Kate survives each day with the help of her medical marijuana card.

Her nemesis is Melanie (comedian Bridget Everett), the intensely involved and just plain intense school volunteer who runs the drop-off lane like a tight ship. (Every parent has met this person at some point.) Melanie’s best friend is Shannon’s Jamie, a divorced, single mom who tends to overshare on social media to project the image that everything is awesome. The newcomer to school is Aselton’s Emily, a childhood friend of Kate’s. A former lawyer, Emily is now adjusting to life as a stay-at-home mom and suffering through a sexless marriage to Tom (Scott), who describes watching the couple’s two kids for the night as “babysitting.”

Jamie likes to plan “fun mom dinners” from time to time: “Lots of wine, no kids,” she promises perkily. When she and Melanie invite Emily to join them, Emily naturally invites along her longtime pal, Kate, even though she’s too cool for such joiner activities. Actually, Emily tricks Kate into coming, which makes things tense from the get-go.

But Jones and Rudd make the mistake of cutting that tension too quickly. It could have been a source of comic conflict for a while. Instead, the ladies quickly connect over way too many glasses of wine (and other substances) over a long night of barhopping. “Fun Mom Dinner” cuts back and forth between their adventures and the comparatively tame night their husbands—Andrew and Tom, specifically—are having as they watch the kids and bond in the backyard over stolen Halloween candy.

It all builds to nothing. There’s no momentum to either storyline. Emily briefly flirts with a scruffily handsome bar owner (Adam Levine), but it’s shocking how little chemistry they have and how lifeless their banter is. And at the point that’s meant to be the height of hilarity, the ladies jump in the water in a marina to chase a boat, led by Melanie in an over-sized unicorn onesie.

While such individual antics are lame, “Fun Mom Dinner” also makes the repeated mistake of banging us over the head with its running gags and needlessly spelling everything out, making the movie feel longer than its 81 minutes. It’s not enough to have the foursome giggle over vajazzling during their night out on the town; the ladies also describe this intimate art form in detail before gawking at (and showing us) a graphic Instagram photo of it. It’s not enough to have them ooh and ahh over the hunky Jake Ryan character in “Sixteen Candles” (because truly, who wouldn’t?); they also over-explain his allure, which should be clear to the viewers this movie is geared toward.

There’s the hackneyed scene when enemies Kate and Melanie break the ice with a few hits of pot from a vape pen. There’s the obligatory slow-motion swagger down the street to suggest the foursome’s bad-assery and bonding as a group. And you know the film is straining for laughs (and stretching the running time) when the ladies hop on stage to drunkenly destroy Nena’s “99 Luftballoons”—in German, no less.

These are indeed moms, and they do have dinner, but the “fun” part is in short supply. 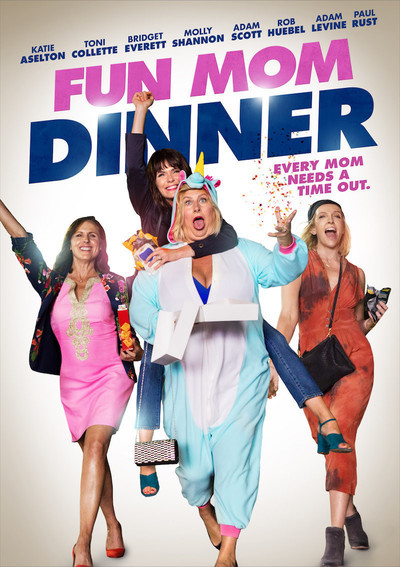