“Snatched” is the highest of high-concept comedies. Goldie Hawn and Amy Schumer star as a polar-opposite mother and daughter who get kidnapped while reluctantly vacationing together in Ecuador. It’s a mismatched-buddy comedy. It’s a fish-out-of-water comedy. It’s a raucous girl-power comedy.

But it’s not much more than a concept. Hawn and Schumer are stuck playing barely-there characters stumbling from one wacky scenario to the next. A cadre of kooks helps them along the way. Both women supposedly shift away from their comfort zones and closer to each other in the process. The end.

If you’re headed on your own vacation, “Snatched” would be a sporadically amusing way to pass the time on the plane, I suppose. As an exercise in afternoon cable-channel surfing while dozing in and out from cold medication, it’s harmless. But as a summer-launching comic adventure, it’s a frustrating waste of everyone’s abilities.

The iconic Hawn hasn’t graced the silver screen in 15 years—not since 2002’s “The Banger Sisters.” Here, she’s a cautious cat lady named Linda who inexplicably displays a preternatural, calm fortitude when the going gets tough. Hawn has elevated similarly throwaway material throughout her career (“Foul Play,” “Overboard,” “Bird on a Wire”), and it’s certainly lovely to see her again, but why come out of retirement for this? The expert timing remains, but she’s awkwardly hemmed-in, and you long to see her burst forth with her signature silliness.

Schumer, meanwhile, plays yet another version of her well-honed persona, which she did far more effectively (and to a surprisingly emotional extent) in 2015’s “Trainwreck.” Emily is boozy and blowsy. She’s selfish and vapid, but she can be fun. And her underlying insecurity and talent for tossed-off, self-deprecating asides make her an unexpectedly endearing figure.

Linda and Emily get tested repeatedly in “Snatched,” though the actresses playing them certainly don’t. But they have their moments together—especially in the film’s early going—which provide a tantalizing glimpse of what might have been with snappier direction and stronger material. It’s as if the mere idea of Hawn and Schumer playing a squabbling mother and daughter were enough. It’s not.

Director Jonathan Levine has shown far greater skill in balancing a variety of genres and tones with his previous films, including the great comedy-drama “50/50” and the horror-comedy “Warm Bodies.” Here, his mixture of action and laughs never quite gels. There’s a lifelessness to the physicality and a shriekiness to the humor.

Similarly, screenwriter Katie Dippold has shown a knack for creating strong and delightfully strange women with her work on “The Heat” and last summer’s all-female “Ghostbusters” reboot. But with “Snatched,” the characters never really deviate from their types until the very end, when they’re called upon to have a sudden and conciliatory change of heart. Wanda Sykes and Joan Cusack show up from time to time as the overly prepared, platonic life partners who help Linda and Emily out of their various jams, but their dynamic feels half-baked, too.

“Snatched” starts with promise, though. The delusional Emily gets fired from her nowhere retail job and dumped by her burgeoning rock-star boyfriend (a very funny Randall Park) in quick succession. There’s a sly, understated nature to the humor here—a rhythm that steadily sneaks up on you. The two had been planning a romantic getaway to Ecuador, and since the trip is non-refundable, she has to find someone else to join her. After all her girlfriends reject her offer, she coaxes the divorced Linda, who still lives in the family’s suburban home with Emily’s nerdy, agoraphobic brother (an amusingly odd Ike Barinholtz), to travel with her to paradise.

But Emily’s flirtation at the hotel bar with a charming and hunky Brit (Tom Bateman) leads to peril for her and her mom, as the two find themselves the victims of a kidnapping plot by interchangeably menacing, brown-skinned bad guys. (Somewhere in here, “Snatched” might be trying to say something about the propensity of pampered Americans to travel abroad without ever daring to immerse themselves in the local culture, but it doesn’t do it in the most thoughtful or articulate way.)

From here, mother and daughter bicker and bungle their way through an escape and subsequent hijinks. It’s all pretty obvious stuff, and not nearly as outlandish as it strains to be. But an escalating side bit involving phone calls between Emily’s freaked-out brother and an unmotivated State Department official (Bashir Salahuddin) provides some off-kilter laughs, and it hints at the kind of movie “Snatched” might have been with a little more daring. Similarly, an interlude with a self-serious, self-styled adventurer in the Amazon (Christopher Meloni) offers some welcome surprises.

But if the journey is the destination, “Snatched” never really goes anywhere. 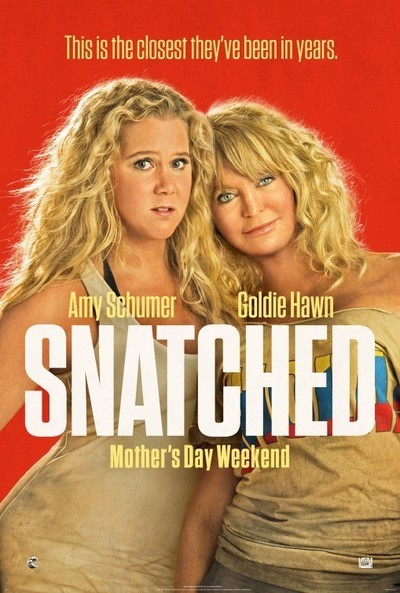