Divisive politics, a health-care plan in limbo, those darn Russians, triple-digit temps. If ever there was a moment when we as a nation needed to let off some steam and chill, it has arrived.

Just in the nick of time, the multiplex offers just such a chance to sit back, take a deep cleansing breath and let go of any pent-up anxiety. That is, for those who can handle hard-R-rated content such as an act of intimacy known as “grapefruiting” that does for citrus what “There’s Something About Mary” did for hair gel. Judging by the contagious outbursts of shock, awe and guffaws at my raucous screening of “Girls Trip,” courtesy of a full house of primarily African-American women along with a smattering of men folk who were invited for the occasion, the best way to exhale these days is to simply laugh as one.

“Girls Trip” is the ladies-on-the-loose comedy that everyone needs right now, even if they don’t know it yet. Yes, this is another equal-opportunity ensemble of females gone wild, most recently observed in the subpar “Bad Moms” and “Rough Night.” While “Bridesmaids” and the “Sex and the City” franchise might have redefined such bosom-buddy bonding while trafficking in the usual raunchy, rude and rowdy behavior, “Girls Trip,” with its epic two-hour length, apparently aims to be the “Lord of the Rings” of sisters doing it for themselves, one that gets a whole lot right that the others too often get wrong.

By now, director Malcolm D. Lee knows how to stock a cast full of top-shelf talent as proven by “The Best Man” films and “Barbershop: The Next Cut.” But he outdoes himself as a matchmaker this time by gathering an insanely likable and capable quartet of actresses to play the college chums who proudly proclaim themselves as the Flossy Posse. Headlining these grads of the class of 1995 is Regina Hall, a regular in Lee’s “Best Man” films, who is promoted to lead as Ryan Pierce, a sleekly pulled-together self-help guru and best-selling author of a book, You Can Have It All—which, for her, includes her retired NFL star husband and business partner, Stewart (Mike Colter of Netflix’s “Luke Cage”). But, of course, her “all” is not what it seems and she suddenly gets the urge to use her appearance as a keynote speaker at the Essence Festival in New Orleans to reunite with her friends after many years apart and allow them to share in her luxury accommodations.

They include Queen Latifah as Sasha, a celebrity gossip blogger who fell out with Ryan after she nixed their website deal, and Jada Pinkett Smith as Lisa, a prim and proper divorced nurse and mother of two who used to be a sexual dynamo back in the day. This is the pair’s first outing together since 1996’s bank-heist thriller "Set It Off" and don’t think “Girls Trip” doesn’t duly sneak in a reference to that oldie. But they and everyone else are forced to take a backseat to the film’s motor-mouth of mass dysfunction known as Tiffany Haddish. Her hard-partying Dina, who lives to stir up trouble, is to “Girls Trip” what Melissa McCarthy was to “Bridesmaids” and Kate McKinnon was to “Ghostbusters”—one-of-a-kind breakouts who commit grand larceny in every scene. Dina’s best trait is her unwavering loyalty to her posse. Her worst is a penchant for hair-trigger acts of aggression—which we first observe when she assaults a male co-worker who has dared to steal her Go-Gurt. As for her love life, let’s just say she is the type who is ecstatic to learn that her STD diagnosis is only chlamydia.

Soon we land in the chaotic French Quarter, where a brass band does a peppy version of “Lovely Day.” Everything is selfies and smiles until Sasha receives a paparazzi photo on her phone that shows Stewart canoodling with an “Instagram skank” known as Simone (Deborah Ayorinde). Money-strapped Sasha must face the moral dilemma of whether she should cash in on revealing to the world Ryan’s marital woes or protect her privacy. But, in between, there is plenty to keep these pals pre-occupied. That includes VIP backstage passes to the Superdome where performers include Bell Biv DeVoe, Common, Maxwell, Mariah Carey and Sean “Diddy” Combs, who yanks Dina up onstage after she flashes her glitter-sprinkled breasts. Other cameos include author Terry McMillan, “Selma” director Ava DuVernay and chef Carla Hall.

Men, of course, come into the picture. That includes a crusty old flasher, a definite “ew” moment for the ages. But Smith’s Lisa finally gets lucky—actually, too lucky as those who have seen the red-band trailer know—when a gorgeous young college student (Kofi Siriboe) attempts to woo her. Meanwhile, Ryan runs into old college flame Julian (Larenz Tate), a bassist for Ne-Yo, and flirtatious sparks tentatively fly. But what will propel word of mouth are the outrageous moments that go where others have declined before. Whereas no actual poop was exploited in the infamous diarrhea outbreak in “Bridesmaids,” a rain shower of urine pours down upon the denizens of Bourbon Street not just once but twice. And if you ever wanted to see Queen Latifah make out with a floor lamp, this is your chance courtesy of a run-in with 200-year-old absinthe.

Screenwriters Kenya Barris (creator of “Black-ish”) and Tracy Oliver (“Survivor’s Remorse”) know how to get the party started and keep it lively. That is until matters are awkwardly forced to take a serious whiplash turn that drags down the final half-hour when many difficult truths must be confronted. But probably what most distinguishes “Girls Trip” from other such comedies is that these four black actresses in their late 30s and mid-40s play adults who are honest, grounded and devoted to one another, differences be damned. Such cruelty-free comedy is a beautiful thing to see. And if grapefruit sales explode in the coming days, you will know why. 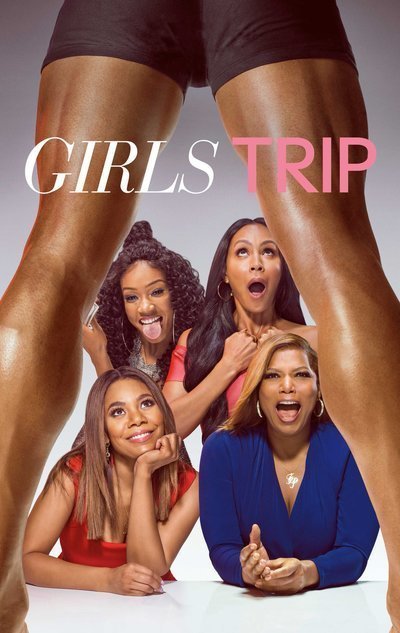