Amos Poe's "Frogs for Snakes" is not a film so much as a filmed idea. That could be interesting, but alas it is a very bad idea. The film is about a group of Manhattan actors who support themselves between roles by acting as gangsters and hit men, and as the film opens they turn their guns on one another. This is a movie that gives new meaning to the notion of being willing to kill for a role.

Barbara Hershey stars as a waitress and debt collector who used to be married to crime kingpin Al (Robbie Coltrane), who doubles as a theater producer and is preparing a production of David Mamet's "American Buffalo." She and several other characters spend much of their time hanging out in a diner and talking about absent friends. So much time is spent in the diner, indeed, that "Frogs for Snakes" begins to resemble a one-set play, until there are excursions to pool halls, apartments and even a theater.

Sample dialogue, from a pool hall: "What are you doing here?" "We heard you were doing `True West.' " "Well, you heard wrong. We're doing `American Buffalo.' " [Shoots him.] Not a single one of the characters is even slightly convincing as anything other than an artificial theatrical construction. Is that the point? I haven't a clue. Much of their dialogue is lifted intact from other movies, sometimes inappropriately (Lisa Marie plays a buxom sex bomb who recites Harry Lime's speech about cuckoo clocks from "The Third Man"). Other speeches come from "Night and the City," "Sex, Drugs and Rock and Roll," "The Hustler," "The Apartment," "Repo Man," "I Am a Fugitive From a Chain Gang" and several more. (The film ends by crediting the screenplays, just as most films end with a scroll of the songs on the soundtrack.) "Today they write dialogue about cheeseburgers and big special effects," one of the characters says, contrasting the quoted classics with "Pulp Fiction." Yes, but Tarantino's cheeseburger dialogue is wonderful comic writing, with an evil undercurrent as the hit men talk while approaching a dangerous meeting; no dialogue in this movie tries anything a fraction as ambitious or risks anything. 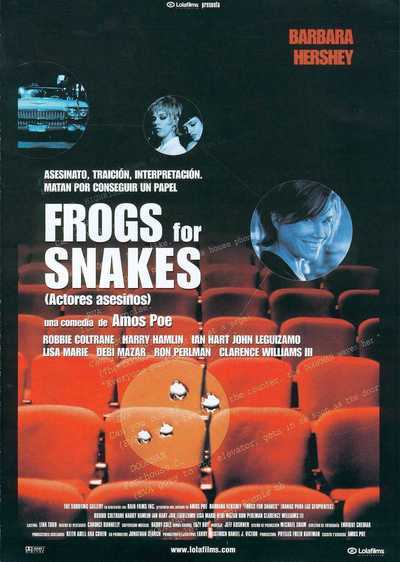 Rated R For Strong Violence, Sexuality and Sex-Related Dialogue, Language and Some Drug Use