The title of “Framing John DeLorean” has two different meanings in this hybrid, mosaic-style story of the man who is now best remembered for the namesake car featured in “Back to the Future.”

After stunning success in creating the muscle car at General Motors, DeLorean started his own company to compete with them. And then, when it was about to fail, he made a desperate attempt to raise money with a drug deal that turned out to be put together by undercover FBI agents.

So, “framing” refers to DeLorean’s claim that he was innocent because the government entrapped him, a claim that persuaded a jury to find him not guilty. And “framing” also refers to the challenge of telling the story of any person’s life, but especially the life of a man whose life encompassed so many extremes of triumph and disaster. At one point, Alec Baldwin-as-DeLorean looks at himself in a mirror surrounded with smaller mirrors, like petals on a flower, and those fractured reflections provide an apt setting for the multi-layered narrative. Baldwin says, “Every day I think about who is he and I have a different answer.”

The film opens with references to several attempts to turn DeLorean’s life into a feature film. He was “one of the maverick rogues of his day,” the “quintessential leading man Hollywood dreams of.” Baldwin, who plays DeLorean in some reenactments and in behind-the-scenes footage discussing his approach to the role, tells us later that DeLorean actually called him once to say that he wanted Baldwin to portray him in one of the feature film projects that never got made.

But one reason those films never got made is that, as someone acknowledges in the film, DeLorean led the kind of life no one would believe in a fictional character.

Another reason is that audiences love rogues who dream big and break the rules, but only if it works. For DeLorean, it worked for a while, and then it did not. Spectacular success—millions, a mansion, a picture-perfect family—was followed by spectacular failure. He became a hero by embodying the essence of his era, mastering the establishment by breaking the rules. In the early 1960s, when the auto industry most exemplified the American dream of personal freedom, unstoppable corporate primacy, and cultural dominance, DeLorean had his choice of give General Motors divisions to run, picked the one with the stodgiest reputation, and made its cars sexy and exciting, to be sung about by the Beach Boys and Jan and Dean.

He captured the spirit of the time because he looked like the ultimate insider with the soul of the counter-culture when he left the biggest, most powerful corporation in the country to create a dream car, with innovations in design and manufacture that were ahead of its time. At a time when there was tremendous energy for rethinking the assumptions about every part of American life, he was the man who conquered the establishment and then walked away from it do re-invent the consumer product the industry had spent half a century telling Americans was the expression of their identities. When GM censored one of his speeches, he leaked the original to the press. He helped write a book exposing the arrogance and incompetence of his corporate bosses. Pretty darn badass.

We see DeLorean himself in archival footage that includes magazine covers, one literally called Success Magazine, as well as the grainy tapes of the sting operation for the drug deal, on the courthouse steps after the jury finds in his favor, being interviewed by Phil Donahue. There is commentary from colleagues, friends, family, his biographer, and others. The saddest are DeLorean’s two children, now adults and still struggling with his legacy. The most charming is Bob Gale, co-screenwriter of “Back to the Future,” who originally planned to have a refrigerator as the time travel vehicle in the film. It was director Robert Zemeckis who came up with the idea of making it the DeLorean, a perfect symbol of quirky but visionary technology.

Baldwin appears as DeLorean, and as himself, an actor trying to create a real-life character. In the make-up chair, with prosthetics being applied to his face, he talks about preparing for the role and asks to see clips of DeLorean at different stages of his life to make sure his performance accurately shows how he changed over time. In the reenactments, "Deadpool"'s Morena Baccarin plays DeLorean’s supermodel third wife, Cristina Ferrare, and “The Good Wife’s” Josh Charles is DeLorean’s colleague Bill Collins, (the real Collins appears on screen himself as well), sharing his story of working with DeLorean at General Motors and going with him to create the famous gull-wing namesake vehicle—until he got pushed out for (correctly) questioning a shady-looking provision in a contract with a new partner. “It’s just paperwork; I’m not a CPA,” says Baldwin-as-DeLorean. As Collins feared, that was another way of saying, “I’m stealing from you and everyone else, bro.”

DeLorean wasn’t about reforming corporate America or making a better car. He was a guy who created an image with plastic surgery and a supermodel wife and a reputation as a rule-breaker, a guy who describes himself with the quote about it’s being better to have loved and lost but misattributes it (it was Tennyson, not Shakespeare).

And then he was a guy who lost it all when he “just perverted some dream that he had,” as one character says. As for the fabulously lavish, 434-acre estate he lost after his bankruptcy filing—it’s now the property of another well-known figure. It became Donald Trump’s Bedminster golf course. DeLorean’s mansion is now the clubhouse.

It is true that no movie can tell the full story of a man’s life. But movies like this one can tell us something important about our own. 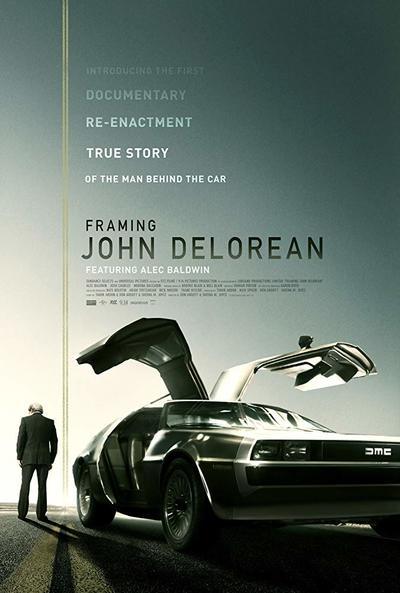