This anthology film with four stories set in a fading hotel and one character in common is a mixed bag, with one hilarious segment, one passable and two that don't work at all.

`Four Rooms" comes billed as a film made by four friends. If they are still friends after finishing this film, that says a lot for their friendship.

The movie's an anthology of four stories set in a faded hotel, with the bellhop, played by Tim Roth, as the connecting link. The other thing they have in common is their co-producer, the ever-available Quentin Tarantino, who spent 1995 demonstrating that he could not only direct a great movie ("Pulp Fiction") but could become the most ubiquitous guest star since Tony Randall.

The four segments are widely different in quality. On the useful scale of the Michelin guides, one is worth a trip, another is worth a detour, and the other two are a colossal waste of bandwidth. The directors are Allison Anders ("Gas, Food and Lodging"), Alexandre Rockwell ("In the Soup"), Robert Rodriguez ("Desperado") and Tarantino, who should save his trademarked stuff for his good movies before he exhausts it in out-of-town tryouts.

The best of the four films - and it's very funny - is Rodriguez's "The Misbehavers." It opens as Ted (Roth), the bellboy, checks in a Latino tough guy (Antonio Banderas), his wife (Tamlyn Tomita), and their two small kids. Banderas is hilarious in a parody of his usual macho stud role (I like the way he kicks the elevator button and folds his wife into his arms in the same smooth motion).

But the fun starts after the couple head out to celebrate New Year's Eve and ask Ted to baby-sit.

He is stern with the children, uttering dire threats if they do not behave. Not only do they misbehave, but they do it so comprehensively that there's one shot (I won't say more) in which they seem to have gotten into all possible varieties of trouble simultaneously. And that's before the dead body turns up. This is slapstick on a grand scale, acted and edited with perfect comic timing, and it makes me want to see a Rodriguez comedy.

Unfortunately, it's the only one of the four films really worth seeing. The next best, but disposable, is "The Man from Hollywood," directed by Tarantino and (need I add?) starring him as an obnoxious new movie star who has taken over a suite with his strange friends (including an unbilled Bruce Willis). By the time Ted walks in, they're drunk and doing a replay of an old Alfred Hitchcock TV episode in which a man bets he can light a Zippo lighter 10 times in a row. If he loses, his finger gets chopped off.

This story line is appropriately Tarantinonian, but the timing is off (except for one key shot), and the dialogue is all over the map. The movie looks carelessly prepared. Tarantino had the right idea in choosing to satirize himself but unfortunately does not seem to understand why he is funny. A movie about him making this film could have been hilarious.

The other two segments are disappointments. Anders gathers a coven of witches (including Madonna) in the Honeymoon Suite for obscure rituals, but only Lili Taylor seems to be in character (whatever it is) and the others look like they're waiting for instruction. The Honeymoon Suite comes equipped with a huge porcelain cauldron in the middle of the floor, and Anders rarely figures out how to frame her shots to simultaneously include the characters, and cauldron and the point.

Equally unsuccessful is Rockwell's "The Wrong Man," starring Jennifer Beals and David Proval in the story of a jealous husband holding his wife at gunpoint.

Roth was directed by each of the four filmmakers in their segments, and the result is revealing: He has a comic role to play, and does it wonderfully, in the Rodriguez segment, but in the other three pieces he depends mostly on mugging, incredulous reaction shots, double takes, and a walk that looks like a bowlegged sailor trying to tack across a deck in high seas.

It is not my job, I suppose, to provide career advice for the exuberant Tarantino, who after all is one of the most likable characters to hit Hollywood in a long time. Judging from his filmography since "Pulp Fiction," he apparently makes friends quickly, and cements each friendship with a contract to collaborate on a movie. He has a big talent, and I would like to gently suggest that sometime soon he commence a project that will remind us of that. 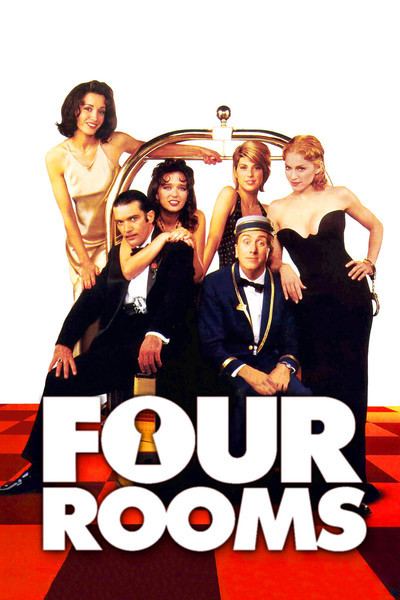 Rated R For Pervasive Strong Language, Sexuality and Some Drug Use