There’s something unceremoniously sincere about the way “Fortune Favors Lady Nikuko” handles parent-child dynamics and the search for validation that consumes so much of one’s time as a young person. This new Japanese animated feature from director Ayumu Watanabe (“Children of the Sea”), with a screenplay by Satomi Ohshima adapted from Kanako Nishi’s same-title novel, offers quirky magical realism in a tonally offbeat package.

“Fortune Favors” opens with Kikuko (Cocomi), a timid preteen, narrating an energetic overview of the many failed romantic relationships that led her mother, Nikuko (Shinobu Otake), aka “The Meaty Lady,” to move to the small seaside town where they currently reside. In a montage that uses vivid silhouettes and a large piece of meat as its canvas, we learn of Nikuko’s unending kindness that others tend to take advantage of.

Paired with that indefatigable upbeat nature, the corpulent woman has a complete disregard for other people’s perception of her lovingly imprudent behavior and extravagant clothing. Kikuko, concerned with her peers’ acceptance, feels ashamed, and questions why they don’t look anything like. However, crucial to the girl’s emotional growth over the course of the slice-of-life narrative is embracing Nikuko as she is.

Later, in a movingly solemn passage, Kikuko ponders what, if anything, her mother did in her past lives to deserve the many heartbreaks and financial hardship that have followed her. “Ordinary is the best of all,” repeats Nikuko every time her daughter disparages her mundane pleasures. Her motto doesn’t speak of the suppression of one’s singular traits but of her ability for wonderment even in the most common circumstances.

Contrasting with the meticulously conceived backgrounds brimming with lived-in details—like the rust on metal objects from their proximity to water—there’s an endearingly chaotic energy to the animation, especially when Nikuko is on screen, that calls to mind the work of another contemporary animation auteur Masaaki Yuasa (“Mind Game”). Curiously, two shots in particular work as obvious, but delightful homage to Hayao Miyazaki’s “My Neighbor Totoro,” utilizing the opposite body types of the protagonists and forest setting.

Fully incorporating the theme of self-worth and celebrating uniqueness as part of the aesthetic, Watanabe’s team designed Nikuko with exaggerated facial expressions and cartoonish movement to differ from the look of anyone else in town. By visually distinguishing her from the rest of the characters, they ensure she captures our attention.

At times, her larger-than-life demeanor and blunt humor tonally clashes with the more introspective occurrences Kikuko faces at school. Nikuko appears to be on an entirely different wavelength, and though this storytelling choice certainly reinforces the disparate personalities, it can throw one for a loop while trying to follow along. Similarly, some of the puns and wordplay that Nikuko cherishes don’t exactly translate humorously.

Although her size also sets her apart from most others around, Nikuko never expresses any desire to change the way she looks. On the contrary, eating well at the restaurant when she works brings her plenty of guilt-free pleasure. Kikuko and their neighbors make comments about her gaining weight, but though these remarks never turn blatantly offensive, they seem to reference Japanese culture’s perspective on larger bodied people.

Kikuko also sticks out from the rest of her classmates. Opinions about her short hair and the fact that, unlike many girls in her class, she hasn’t started her period, plague her with insecurities, especially around Ninomiya (Natsuki Hanae), a bizarrely charming boy whose coping mechanism is to pull awkward faces. As exhibited in “Children of the Sea,” a much more intricate outing narratively, Watanabe excels at portraying the impulsiveness and fragility of adolescents—even if he struggles finding tonal equilibrium.

But outside from that burgeoning crush and petty drama with her best friend, which at her age feels extremely relevant, Kikuko’s own distinctiveness comes across in her apparent ability to hear animals speak encouraging seagulls, tardy lizards, and even a resentful penguin. From the multiple incidents that we witness Kikuko undergo, an air of maturity develops around her that she tacitly shares via voiceover. That includes the way she sees Nikuko.

Slowly, with each passing season and major school event, a secret begins to peak its head from Nikuko’s past that might test their bond. Yet, the more the running consists of Kikuko’s coming-of-age and interpersonal challenges, the more one consistently wishes we would see more of Nikuko and how she spends her days. Invested in the youth, “Fortune Favors” only occasionally zooms out to let us revel in the warm weirdness of the movie’s main adult.

Misshapen parts and all, “Fortune Favors” fulfills its purpose as a joyfully eccentric tribute to personal authenticity. As the title reflects, despite all the unsavory situations fate has served her, Nikuko won’t ever interpret her journey as a tragedy, so long as she has the biggest lucky break of all by her side: her reluctantly affectionate daughter. 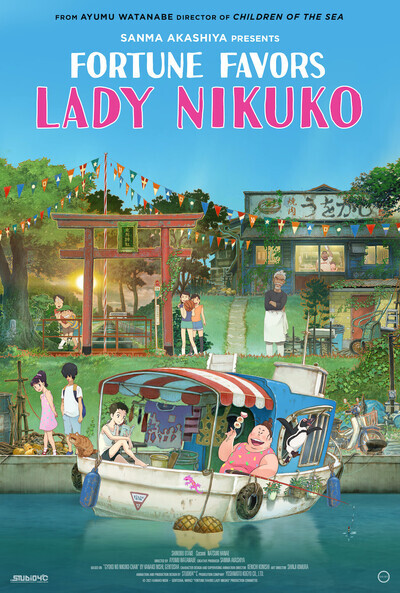 Yuichi Yasoda as Old man at the aquarium / Other characters (voice)