Children of the Sea

People are mostly relatable as objects in the Japanese animated fantasy “Children of the Sea,” the latest maximalist spectacle from the animators at Studio 4C. That's mostly because the film's world is meant to reflect both its protagonists’ adolescent fears as well as a more universal sort of worry, an ungainly combo that might work in Daisuke Igarashi’s source comic, but doesn’t translate well in co-directors’ Kenichi Konishi and Ayumu Watanabe’s adaptation. In the movie, junior-high-school-aged heroine Ruka (Mana Ashida) is most believable when she and her free-spirited, but elusive friends Umi and Sora (Hiiro Ishibashi and Seishu Uragami) are presented as the epicenter, rather than the focus of their own stories.

Emotions tend to run high in “Children of the Sea,” as one might expect given its general concern with a mysterious song that triggers a global migration of sharks and whales. Unfortunately, Konishi and Watanabe don’t successfully bridge the gap between Ruka’s feelings—mostly estrangement with her parents—and the cosmic events that Umi and Sora are somehow more tapped into than anyone else in the movie. “Children of the Sea” is consequently yet another animated fantasy based on hackneyed tropes, like sprite-like martyrs, the guiding hands of fate, and vague nostalgia for a pre-technological past. Ruka starts the movie as a blank slate, and literally ends up encompassing whole galaxies, a fate that not even Ruka seems to believe: “I see it. Am I the universe?” I saw it, too, but I never really believed it.

Ruka is most recognizably human at the beginning of “Children of the Sea,” when she’s unsure of how to spend her summer vacation. But even then it’s hard to tell what’s on Ruka’s mind, beyond her general frustration with being alone, as well as a dream-like memory of a whale (or a ghost?) that she spotted during a childhood visit to the Enokura Aquarium. Still, Ruka wanders into the aquarium, first to visit her father Masaaki (Goro Inagaki), and soon to pursue Umi, a Tarzan-like foundling who was raised by dugongs along with Sora, his constant companion. The three pre-teens bond, though Sora immediately creates tension by flaunting his, uh, familiarity with Umi. And eventually they join Ruka’s dad in investigating the mysterious signal that’s agitating all nearby sea life, including humpback whales, whale sharks, and Sea Sparkle plankton.

Unfortunately, the rest of “Children of the Sea” isn’t as clear. Ruka and Umi’s relationship goes from being a typical fish out of water story—he doesn’t know how to eat ice cream, just like Mork to her Mindy!—to a spacey coming-of-age story that only concludes after an old woman in a boat solemnly advises Ruka that “Outer space and humanity are similar. We are made from the same substance. Therefore, we are more than similar.” In this stoner-friendly light, Ruka and Umi appear to be two parts of a balance-restoring whole, as the brilliant, but reclusive marine biologist Anglade (Win Morisaki) suggests: “This universe is held together by a balance. All things can be observed from two perspectives.” Well, sure, but how exactly do mysterious meteorites (“Reach into your stomach to give it to him”) and mystical prophecy—“The wind holds memories of the oceans”—convey themes of universal empathy, let alone provide a credible emotional foundation for an animated juvie drama?

Like a lot of feature-length manga adaptations, “Children of the Sea” is least convincing when it’s grounded by expository dialogue. There’s too much plot, and not enough time to cram it all in, making it hard to care about what happens to Ruka and her companions. She’s most relatable when she’s overwhelmed by her emotions, like in an early scene where she runs away from her school in a huff: the camera follows her as she runs towards it, and through the spider-vein thin streets around her school. Ruka’s upset, so her world seems to keep expanding as she runs ... but then she trips, and pitches forward, towards us. It's quiet after Ruka’s fall, except for the sound of her half-sighing, half-crying. The camera shifts, now over her head as she gets up, and we see a train passing under the bridge that she's collapsed on. All due praise to art director Shinji Kimura and CGI director Kenichiro Akimoto for using trompe l’oeil stylization to sometimes give Ruka the illusion of psychological depth.

But only sometimes. “Children of the Sea” is gorgeous throughout, but doesn’t quite land as a standalone work. Fans of Igarashi’s manga may enjoy themselves, but it’s hard to recommend a movie that’s a triumph of artistic design over visceral effect. The universe may in fact be held together by dueling perspectives, but the only thing consistent about “Children of the Sea” is its inconstancy. 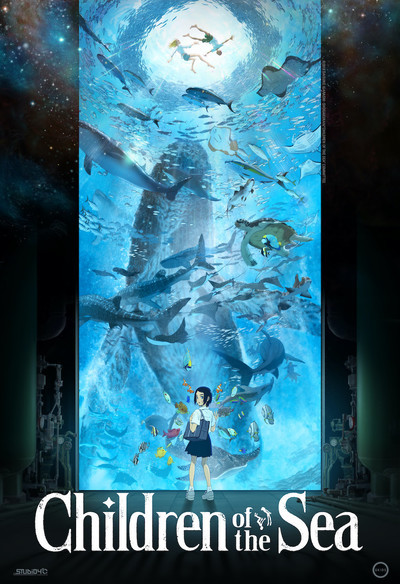