For a Few Dollars More

Here is a gloriously greasy, sweaty, hairy, bloody and violent Western. It is delicious.

"For a Few Dollars More," like all of the grand and corny Westerns Hollywood used to make, is composed of situations and not plots. Plots were dangerous because if a kid went out to get some popcorn he might miss something.

So Westerns had situations, instantly recognizable. The man in the black hat strikes a match on the suspenders of a tough guy at the bar. Two gunmen face each other at each end of a long alley.

"For a Few Dollars More" has lots of stuff like that, but it's on a larger, more melodramatic scale, if that's possible. Shoot-outs aren't over in a few minutes like they were in "High Noon." They last forever.

This is a sequel to "A Fistful of Dollars," which I didn't see but wish I had. Both films were shot in Italy, with English-speaking actors in the leads and Italians in the bit parts with dubbed dialog.

Clint Eastwood, as The Man With No Name, is formidable: He chews and spits out dozens of cigars.

Lee Van Cleef, as Col. Mortimer, looks like an infinitely weary Clark Gable. He carries an arsenal with him. After a memorable duel in which they shoot each other's hats to pieces, Eastwood and Van Cleef join up to collect the reward for the desperado Indio (Gian Maria Volonte).

The rest of the film is one great old Western cliché after another. They aren't done well, but they're over-done well, and every situation is drawn out so that you can savor it. 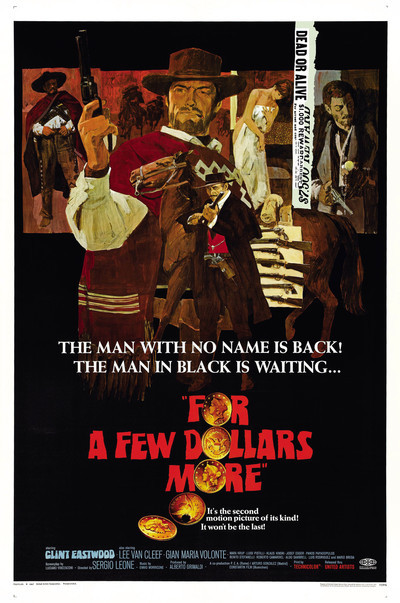 Clint Eastwood as Man With No Name