But co-stars Will Smith and Margot Robbie remain consistently charismatic, even once the script for this heist caper collapses in a punishing pile of its own twists and double-crosses.

For Smith, “Focus” functions as a return to form, which admittedly sounds odd in describing a box-office titan who hasn’t really gone anywhere in the past quarter-century. But recent years haven’t treated him so kindly, between the ponderous “Seven Pounds,” the forgettable “Men in Black 3” and the disastrous “After Earth.” Here, as a veteran con man, Smith seems looser—charming as ever but also broken, commanding yet vulnerable. It’s as if he’s finally shifted into the right gear as he settles into middle age—good lord, is the eternally boyish and buoyant Smith approaching 50?—and he’s comfortable there.

For Robbie, “Focus” cements her status as a major star. After a hilarious and head-turning supporting performance in 2013’s “The Wolf of Wall Street”—where she nearly stole the whole behemoth of a film out from underneath a larger-than-life Leonardo DiCaprio—the Australian actress proves she’s just as fierce as a leading lady. It’s not just that she’s stunningly beautiful and impossibly photogenic (which she is). She also has great instincts and a flair for comic timing, with a playfulness that’s as powerful as her sex appeal.

The film from the writing-directing duo of Glenn Ficarra and John Requa gives these actors plenty of brisk and snappy material to work with, both individually and as a team in various forms. But, like Ficarra and Requa’s 2011 comedy “Crazy Stupid Love,” “Focus” begins promisingly and bops along enjoyably for a while, only to run out of steam in the third act.

At the start, though, Smith’s Nicky and Robbie’s Jess enjoy crackling chemistry as strangers trying to outsmart each other over wine and candlelight at an upscale Manhattan restaurant. (The way cinematographer Xavier Perez Grobet often shoots them—sitting opposite each other at a table in an opulent setting, bathed in sultry light—is reminiscent of the Steven Soderbergh classic “Out of Sight” in ways that surely can’t be a coincidence.) She’s a small-time hustler trying to weasel her way into more lucrative gigs. He’s been at this game his whole life and has major operations down to a science.

Once each of them realizes the truth about the other—if such a thing as truth is possible in a movie about con artists—she begs him to teach her everything he knows. This leads to a scene that’s one of the film’s highlights as they flirtatiously dance around each other in a snowy Lincoln Center, with Nicky preaching the importance of taking away a mark’s focus while pocketing every last one of Jess’ belongings.

Then it’s off to New Orleans, where Nicky reluctantly lets Jess join the massive team he’s assembled to snatch watches and wallets from the unsuspecting revelers who’ve gathered for a Major Professional Football Championship. (Whatever you do, don’t call it the Super Bowl.) Turns out, she’s a natural—a massive distraction in a tight dress with a light touch—as revealed in a beautifully edited sequence amid the crowds of Bourbon Street. And Jess distracts Nicky, too, as the thrill of the wrongness of it all gives way to (not-entirely convincing) romance.

The Superdome itself provides the setting for the film’s tour de force sequence in which Nicky’s gambling habits put him in serious peril with a high roller (an amusing BD Wong) in a luxury suite. This section of the movie could function as its own freestanding short film, it has such a strong arc and it provides such a heady mix of tension and laughs. I wouldn’t dream of giving away its many surprises, but I will say this: You will never listen to the Rolling Stones’ overused “Sympathy for the Devil” in a film the same way ever again.

If “Focus” could have ended there, it would have been a dazzling little gem. But it keeps going, traveling to Buenos Aires three years later. There, Nicky is running another scheme for wealthy race-team owner Garriga (Rodrigo Santoro) involving duping his competitors with some high-tech thingy that makes cars go faster. What the device does isn’t important, but the way Nicky uses it to manipulate everyone around him is what sets up the film’s climax, albeit in rather flimsy fashion.

(Gerald McRaney does get to enjoy some truly lacerating language as Garriga’s gruff and mistrustful right-hand man, though. Similarly, Adrian Martinez supplies his share of laugh-out-loud lines as Nicky’s lewd longtime sidekick.)

More importantly, Buenos Aires is where Nicky reunites with Jess, who’s now enjoying a life of wealth and comfort as Garriga’s girlfriend. Of all the gin joints in all the world, right? But while Jess insists she’s left her life of crime behind, nothing in “Focus” is ever that easy.

As vibrant as these characters are, there’s not much to them beneath their glossy surfaces, which makes it difficult to become emotionally invested in whether they end up together—or whether that sort of ordinary human connection is even possible in this extraordinary world. Nicky at least has a backstory about a cold-hearted father, which is intended to explain his inherent cynicism. Jess isn’t even afforded that much characterization.

We know in a movie like this that we in the audience are being played just as much as the poor fools on screen. In theory, that’s part of the fun—trying to stay a step ahead of the action, and often failing. But “Focus” is all surface, all artifice, to the point where we can’t help but expect the duplicity. And the twists come so fast and furious toward the end, they feel more like overkill than a shock. The trick that makes Robbie’s character such an expert thief—her light touch—is the very thing the movie loses toward the end. 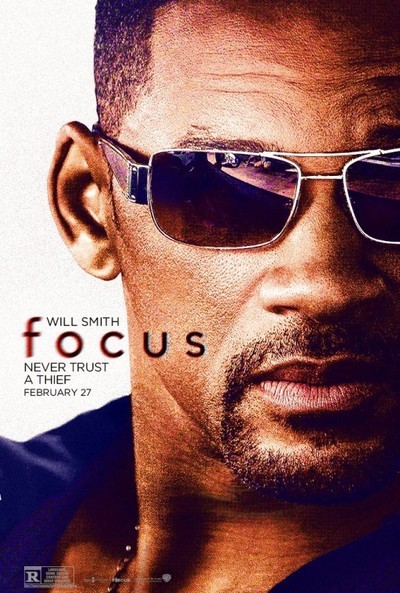 Rated R for language, some sexual content and brief violence

Will Smith as Nicky