"After Earth" is a lovely surprise. This film from producer-costar Will Smith and director M. Night Shyamalan, about a father and son marooned on a hostile future earth, is a moral tale disguised as a sci-fi blockbuster. It's no classic, but it's a special movie: spectacular and wise.

Smith plays a veteran space soldier with the metaphorically overripe name of Cypher Raige. The actor's real-life son Jaden ("The Karate Kid," "The Pursuit of Happyness") plays Cypher's son Kitai, an aspiring warrior who just failed his cadet promotion test. The script, cowritten by Shyamalan and Gary Whitta, lays out a futureworld in brisk brushstrokes. Humans have fled a polluted Earth and built cities on the distant Nova Prime. Unfortunately, the planet was already claimed by another species that didn't take kindly to the colonists and created predators to kill them. The predators are called ursas. They look a like huge versions of Mike from "Monsters, Inc.," only dipped in acid and slime and outfitted with razor fangs and pincers. They hunt by smelling fear.

The humans of Nova Prime fought the ursas to a draw, but one of them still killed Kitai's sister during a home invasion when the boy was younger. The kid has a survivor's guilt, and his dad feels horrible for being away on assignment when the nightmare happened. On top of all this, Cypher's a bit of a Cypher: a warrior known for his ability to "ghost," slang for fighting without fear, but very much a ramrod-straight man-of-few-words type, so emotionally constipated that he seems to have to remind himself what laughter sounds like. Kitai is the eager young space cadet trying to embody and exceed his father's example, craving expressions of approval and love that his pop's not wired to provide.

I realize I've described the main characters as if we spend the first hour eavesdropping on them in therapy. "After Earth" isn't like that. It's a stoic film about stoic characters fighting for their lives. The Raiges' ship is damaged in a freak asteroid storm, tossed out of hyperspace and into Earth's orbit, skims across the atmosphere like a pie plate, and is torn in two. Cypher and Kitai are the only survivors from the front half. Their distress beacon has been destroyed in the crash. The ship's back half, which might or might not contain a working distress beacon, is 100 kilometers away. If the castaways don't call for help soon, they'll asphyxiate or get eaten by predators, one of which is an ursa that was cargo on their ship, set free by the crash.

Cypher's legs are broken. Kitai has to make the journey for him. He only has his trusty "cutlass" (a retractable double-bladed weapon), and an environmental suit containing basic supplies and a video-audio system that can let his father guide him from afar. Most of the film's dialogue is goal-related: Go here. Try this. No dad, that won't work, I should try something else. The film tells its story as Cypher or Kitai might. Each scene lasts as long as it should, and no longer. The camera moves with a purpose: to follow and frame and explain action, conceal or reveal surprises, and deepen the relationship between the characters and their world.

This is the right movie at the right time for Shyamalan. He usually writes, directs and acts in his own features. His control-freak tendencies magnify both his merits (spooky atmosphere, cunningly staged shocks, virtuoso camerawork) and his flaws (contrived "twist" endings, sub-Spielberg sentimentality, geeky fake-profundity). After the critical and box office misfires of "The Village," "Lady in the Water," "The Happening" and "The Last Airbender," some thought he was finished as an A-list filmmaker. His talent was still there, but it was hard to see it behind all that ego. His pop mojo was as wrecked as Cypher's starship.

Shyamalan didn't originate this project. He rewrote a script based on a story by Smith, who read a magazine piece about a father and son surviving after a plane crash, re-imagined it as a space fantasy, and hired Shyamalan to direct. So he's a gun-for-hire on "After Earth" — but clearly not a disinterested one. The M. Night vibe is subdued here, but you can still feel it — particularly in the wide shots of Kitai scrambling along forest floors and up mountain peaks, and in the scenes of Cypher talking his son across treacherous land, their tightly-framed faces answering each other through editing, and sometimes seeming to meld into one organism with shared consciousness. In the film's lyrical final act, the two seem as spiritually attuned as E.T. and Elliott.

The movie's world is nearly as CGI-enhanced as the title world of "Avatar," but it feels more real. It's not a special effects theme park with a new slobbering space beast behind every tree trunk, but a fully imagined ecosystem, a tapestry of flora and fauna. Fern fronds curl in icy night air. Flocks of birds form patterns in the sky. Carnivorous baboons, great cats, wild pigs, snakes and condors move like real animals, and react to threats with intelligence as well as force. Some of Shyamalan's images echo classic movie tales of survival and madness in nature: "Aguirre: The Wrath of God," "Jeremiah Johnson," "The Searchers," "The Naked Prey," "The Edge."

"After Earth" is ultimately too thin of a story to support all of its grandiose embellishments, but so what? It's better to try to pack every moment with beauty and feeling than to shrug and smirk. The film takes the characters and their feelings seriously, and lets its actors give strong, simple performances. The younger Smith is a great male ingenue character, unaffected and kindhearted and free of vanity. The elder Smith stows the Bel Air badass shtick that makes many of his star performances tedious and gives a restrained, very physical performance, letting subtle vocal tremors and shifts in body language hint at the worries that the father hides from his son. In scenes that frame Will Smith's watery eyes and battered, crewcut head in close-up, the star evokes the middle-aged Burt Lancaster: a monument to machismo, worn down by pain and time.

The father teaches lessons to the son, and the son to the father. As the poster says, danger is real, but fear is a choice. You can become the master of an event, the creator of a moment, even if it seems overwhelming, if you've absorbed the wisdom of people who lived through similar tests and told you how they survived them. And yet no lessons are universally helpful, no rules ironclad. Sometimes you have to disobey orders, even if they come from a commanding officer who gave you half of your DNA. Parent and child must ultimately separate because it's the only way to re-create themselves as equals. On some level both characters know this, even though it makes them sad.

All this sounds corny by current standards. But by current standards, Aesop's fables and Bible stories are corny, too. "After Earth" carries itself with confidence because it knows what it wants to say, and how to say it. The asteroid storm appears suddenly, as if willed into being by Poseidon stirring a cauldron with his trident. The design of the spaceship would make Odysseus feel at home: the ribs of its hull seem to be made of wood and bone. The skyscrapers on Nova Prime are built from triangular wedges that suggest a schooner's sails. The warriors fight with blades. Ursa is Latin for bear. Kitai's leap from a high cliff is a leap of faith. His name is Japanese for "hope." This movie is a fable. Fables teach. 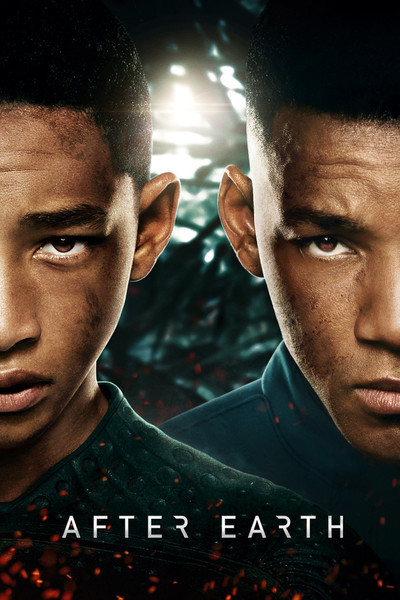 Will Smith as Cypher