“Five Nights in Maine” is as evasive as a corrupt politician. Its coyness about what’s truly in its heart of darkness is either cowardly or lazy, or some measure of both. Everything here, from the pacing to the framing to the writing, is subdued in that sluggish manner often mistaken for profundity. The actors exchange “meaningful” glances and use halting pauses between words while a weepy score drones on in the background. As a result, the viewer is left to his or her own devices to build a contraption of a plot based on what one can infer. When done, there will be several spare parts left over.

So, based on my beer batter-fried powers of deduction, here’s what I think this film is about: Lucinda (Dianne Wiest) is a crabby old widow who hates the fact that her daughter Fiona (Hani Furstenberg) married a Black man named Sherwin (David Oyelowo). In one of the many flashbacks this film is infested with, we hear Sherwin say to Fiona that Lucinda "tried to destroy us." After years of estrangement, Fiona decides to visit her ailing mother, who is now sick with cancer and being cared for by Ann (a subdued yet interesting Rosie Perez). Fiona’s reasons for going are never explained, but her visit is an expected disaster. Right after visiting Lucinda, Fiona dies in a traffic accident, leaving Sherwin to take her ashes across the country to visit the person they both actively despised.

“Why did you come here?” Lucinda asks Sherwin when he arrives at her home in Bumble-Eff, Maine. It’s a damn good question, one asked twice but may as well be rhetorical, for the film has no credible answer. With Fiona’s death taking place five minutes into the film, “Five Nights in Maine” positions itself to be a meditative exploration of grief, heavy on the meditation. But as any good therapist will tell you, you can’t heal if you’re not honest about your problems. In all of their scenes together, Lucinda and Sherwin exchange exasperated glances, then Lucinda tap-dances around the big Black elephant in the room. First, she implies that Sherwin is responsible for her daughter’s death, then she treats him as if he were the hired help. After Lucinda catches Sherwin in an easily exposable lie, the film reaches a climax where neither party addresses any of the problems that antagonize them.

Wiest doesn’t make an appearance until 25 minutes into “Five Nights In Maine”’s 82-minute runtime. Until that moment, the film is mildly successful at portraying one man’s grief over the loss of a significant other. Though Fiona’s death happens too quickly for us to register it on an emotional level, Sherwin’s coping mechanisms are effectively familiar. He drinks too much and eats too little, opting to stay cocooned in his home in a state of shock. Shaking him from his melancholy, at least temporarily, is his sister Penelope (Teyonah Parris, doing wonders with an underwritten role). She successfully gets him off the couch, but his first action item is thinking, “I’ll combat my grief by driving from San Francisco to Maine to see the racist-ass mother-in-law who tried to destroy my marriage! Lord, I’ll feel so much better after some of her abuse!”

Whenever Parris or Perez are onscreen with Oyelowo, “Five Nights in Maine” lets the actors breathe and volley off one another. (Perez has a great, highly inappropriate story about a lighthouse that’s a cross between “The Piano” and “So I Married an Axe Murderer." Oyelowo’s reaction is priceless.) It’s only when Oyelowo interacts with Wiest that the film turns chicken, leaning heavily on dramatic device rather than brutal honesty. Writer/director Maris Curran needed to channel the unflinching eye of “Shoot the Moon”’s Alan Parker in these scenes; she has two excellent actors at her disposal who have the chops to handle the rawness this material warrants.

There’s a much better film out there that deals with the sudden loss of a spouse and the resulting grief that paralyzes the surviving half of the couple. It’s called "Men Don’t Leave," and it features a career best performance by Jessica Lange as a woman coping with the aftermath of being widowed. Like Oyelowo’s Sherwin, Lange has to be dragged back into life, but Paul Brickman’s film isn’t afraid to be uncomfortably blunt and even absurdly funny. Additionally, it contains overwhelming expressions of grief that are as cathartic as anything cinema has to offer. This is the kind of movie Oyelowo, Parris, Perez and Wiest deserve. Unfortunately, they’re stuck in “Five Nights in Maine.” 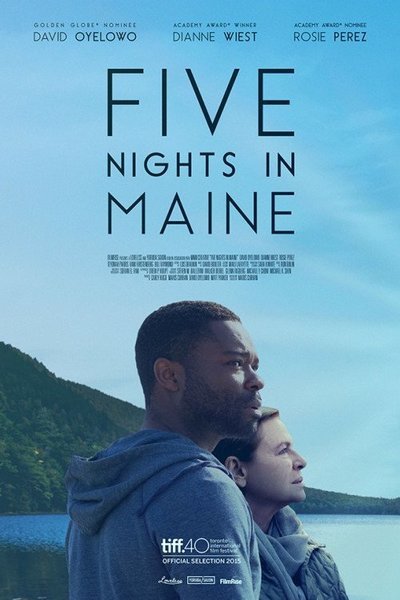