Devil and messiah, peacemaker and judge, good and evil. This is the duality supposedly embodied by Sepoko, the fearsome gang leader in Michael Matthews’ debut feature, “Five Fingers for Marseilles.” Rather than have “Love” and “Hate” tattooed to his fingers like Robert Mitchum in “The Night of the Hunter,” Sepoko wields two guns—one light, one dark—with equally righteous zeal. He may be as much a false prophet as Mitchum, but his bellowing voice and slithering body language are more akin to Jabba the Hutt, not to mention the iconic actor who inspired the creature, Sydney Greenstreet. When he tauntingly calls out the name, “Mayor,” he stretches out the word like a mound of Silly Putty before punctuating it with a gleeful cackle. Even the heavens visibly shudder as he recounts his origin story, which is such a jaw-dropper, it would make the Joker envious. His mother was struck by lightning while giving birth to him, thus forcing the newborn Sepoko to pull himself out of her charred body. Now dubbed “The Ghost,” the seemingly invincible crime boss aims to wreak havoc on deceptively liberated towns in post-Apartheid South Africa. As played with delicious menace by Hamilton Dlamini, Sepoko easily walks away with the picture every time he’s onscreen. I’ve decided to single him out right at the top of this review, because not only is he the showstopper of the movie, he’s the only thing about it that gave me any joy.

“Five Fingers for Marseilles” is certainly an accomplished work in many respects. Shot on location in the rural village of Lady Grey, nestled in the foothills of the Witteberg mountains, the film has numerous shots of arresting beauty. When viewed from overhead, the town appears dwarfed by the desolate landscape, straining to inject a sense of civility into the inherent unruliness of the territory. Over the hill from the village—named Marseilles in the film—is Railway, a slum inhabited by the people tasked with building the railroad that enabled settlers to occupy their land. The friction between ruling white supremacists and the majority of the African population during Apartheid is echoed in an early confrontation between innocent civilians and condescending caucasians with a badge. A radio announcer argues that the Constitution is being changed merely to protect the status quo, continuing the armed struggle in South Africa and escalating the nation’s “internal conflict.” The rest of the picture illustrates how social inequity has continued to fester long after “freedom” has been achieved. This historical context lends added meaning and poignance to what otherwise plays as a dreary genre exercise.

Matthews and screenwriter Sean Drummond previously collaborated on two short films, and they seem to struggle here in making their picture thrive as a feature-length narrative. The opening 18-minute pre-title sequence could serve as its own standalone work, introducing us to a group of young protagonists determined to preserve the sanctity of their land by battling police oppression. All we’re afforded are fleeting character descriptions for each kid—Zulu is the fearless leader, Tau is the vengeful lion, Unathi is the pastor and storyteller, Bongani is wealthy and heavyset, Luyanda is the “broken one” and the lone girl, Lerato, is the “heart” of the group. Together, they form The Five Fingers, though there are clearly six members. Alas, Lerato is quickly reduced to the role of a damsel, following a heated interaction with threatening police officers whom the kids pelt with rocks. Their sudden decision to snatch Lerato and drive off with her causes Tau’s anger to turn lethal. After running the officers off the road, Lerato appears to have perished in the crash, leading Tau to shoot both officers to death. Absent is any rousing burst of catharsis, as the men—heinous though they are—nevertheless appear achingly human while coughing up blood. Once Tau realizes that the girl has, in fact, survived the crash, he wanders off into the horizon, shaken by his own capacity for violence.

How the kids in this sequence evolve into the tormented adults seen throughout the rest of the picture is never adequately explored. The film merely jumps ahead two decades, where all the principal characters have been rendered unrecognizable (apart from Zulu, who has expired). We’ve barely met them before they’re introduced to us a second time around, yet so dramatically have their identities shifted that they might as well be different people. Tau (Vuyo Dabula) is now an outlaw freshly released from prison, whose years following the incident from his youth have been entirely devoted to crime. The former members of his short-lived quintet are all too eager to blame their own poor life choices on his misdeeds. Even Unathi (Aubrey Poolo), now an actual pastor, insists, “We are what we are because of you.”

Perhaps this debatable charge would’ve had more impact if we actually got to see more adventures of the Five Fingers prior to their disbanding, or the alleged reasons why Tau’s actions marred the respective futures of his childhood companions. Is it really Tau’s fault that Luyanda (Mduduzi Mabaso) is more broken than ever, taking on the hardened persona of a monstrous police officer, while Bongani (Kenneth Nkosi) has grown into a corrupt and lecherous mayor? And do they really have no other option apart from sealing their fate in a Sergio Leone-style shootout? Since we only see the beginning and endings of these characters, it’s difficult to become involved in their plight. Only Sepoko seems to be enjoying himself, and his enjoyment is infectious. He’s certainly more fun than Honest John (Dean Fourie), a would-be comic relief grafted onto the action, suggesting what “The Magnificent Seven” may have looked like had Mr. Bean joined the cast. The film itself seems so uninterested in him that it forgets to show us whether or not he survived the big showdown.

There are no thrills in this western yarn, just a mounting series of tragedies that are by turns frustrating and numbing. A new cast of Five Fingers form during the climax, though it takes at least four more Fingers to get the job done, allowing Lerato (Zethu Dlomo) to belatedly get a moment to shine. It’s the sort of protracted finale where everyone moves at an awkwardly slow pace, as if awaiting their cue to be shot or salvaged. By the time we’ve reached the story’s immensely unsatisfying conclusion, we have no choice but to join the pastor in waiting for the end to arrive, hopefully sooner than later. 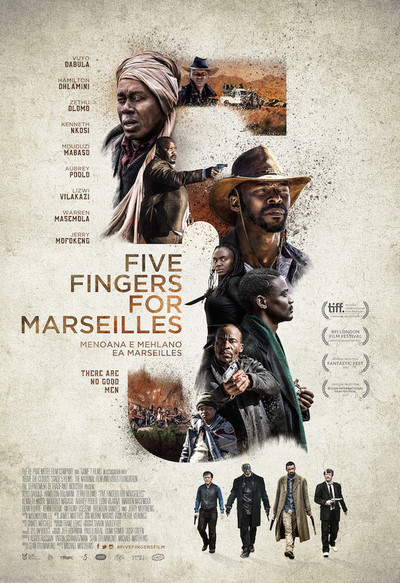