Writer/director Jasmin Mozaffari wants you to know straight away that you will be in for a hard-hitting ride with “Firecrackers,” an expansion of her 2013 short film with the same title. Her opening scene—a scorching plunge into a disorienting world that is anything but happy-go-lucky—is drenched in bright sunlight, while a shaky camera (albeit predictably restless) alarms in the way it twirls around blinding colors. Then we hear severely profane words that disturb the radiant panorama—they are uttered by teenage men and women, seemingly on the cusp of their twenties. And before we know it, a vocal fight turns physical and a nonchalant young woman’s bleeding face leads us into the dead-end world the film’s main female protagonists—two toughened dreamers with a mission—desperately want to leave behind for New York as soon as tomorrow. It’s an all too familiar, almost clichéd tale you’ve heard and seen before, complete with a much-yearned freedom journey to nowhere. But Mozaffari gradually makes this particular doomed excursion her own with a distinct style, even though her plotting choices don’t approach a sense of high-stakes urgency.

If your mind is wandering towards an adolescent “Thelma & Louise” of sorts at this point, you might be getting a little ahead of yourself. Mozaffari’s ably conceived but sometimes frustratingly unspecific world is a lot closer to Andrea Arnold’s “Fish Tank,” with the whimsy of “American Honey” poured over its uncompromisingly dark social realism. With this particular marriage of tones, Mozaffari prances around certain contrasts with purpose. On one hand, her writing emphasizes the desperation of the two young women who had been working hard to escape their corner of an unnamed Ontario town. On the other, her visual choices draw on airy colors and light towards avoiding the illustrative pitfalls of misery porn, despite the fact that the conditions we’re introduced to couldn’t be any more miserable.

One of the loud, and at times, haughty females stuck amid all the dismay is the flamingly red-haired Lou (Michaela Kurimsky). She lives in an unkempt home with her single mother Leanne (Tamara LeClair)—an unsympathetic warden who seems to have a destructive history with addiction—and her younger brother, who might be gay. In the film’s gentler scenes, we witness bonding moments between the oftentimes volcanic Lou and her sibling, and come to understand how the emerging sexual identity of Lou’s brother rests on the opposite side of the toxic masculinity all too commonplace in this world. Among its dwellers is Johnny (David Kingston), Leanne’s no-good, years-junior boyfriend who has no business of being anyone’s father figure. Yet he still tries to discipline Lou in one scene, only to predatorily take advantage of Lou’s youthful sexual curiosities later on.

The other teenager we follow is Lou’s best friend Chantal (Karena Evans), who has her share of battles as a woman of color routinely challenged by everyday racism, manifested through casually ignorant remarks strangers make about her hair. Chantal is as resolute as Lou to put their plan in action before it goes sideways, working as a maid in a motel alongside her best friend to save up the dough they would need to start a new life. But what are two inexperienced teenagers to do when their entire town seems to be against their plan to liberate themselves, the details of which they thoughtlessly flaunt to everyone?

The escalating events Lou and Chantal brave—one involving a devastating case of sexual assault—are bleak and destructive beyond words, but Mozaffari doesn’t quite seize their emotional toll. Thankfully, the spirited performances from her committed leads come to the filmmaker’s aid. The stubbornly plucky Kurimsky is especially dazzling—the camera loves her so much that she permanently looks to be lit under the spell of magic hour. Eventually, Mozaffari leaves us with a film that has a slice-of-life quality to it, one not as crackling as it should be while it steers into a transitory feeling of hope. But “Firecrackers” still sizzles with the promise of a confident voice behind the camera, capable of turning the whispers of the overlooked into something fiery. 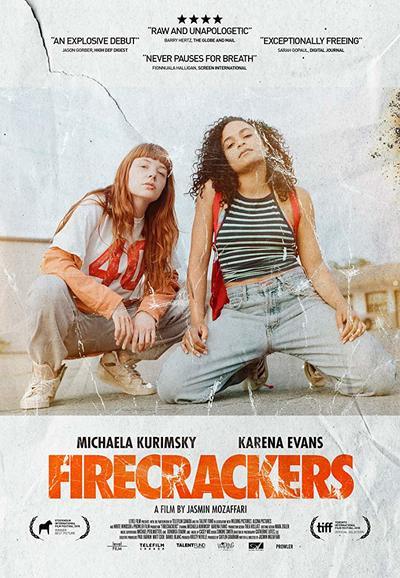