Between all the gags involving prosthetic penises (of the freakishly large and small varieties), between all the tasteless racial jokes, random pop-culture references and wacky-kinky sexual hijinks, “Fifty Shades of Black” actually may have something of substance on its meandering mind.

Seriously. Just hear me out on this.

Yes, it’s a Wayans genre spoof (which wasn’t shown to critics before opening, it should not surprise you in the least to discover), along the lines of the “Scary Movie” and “A Haunted House” franchises. Yes, it is as raunchy, juvenile, scattered and downright disgusting as those movies tend to be. And yes, it’s making fun of the “Fifty Shades of Grey” phenomenon, a juicy piece of low-hanging fruit if ever there was one. But there’s a moment toward the end that suggests maybe – just maybe – Marlon Wayans & Co. were trying to make a pointed cultural statement.

Really. Just go with me here.

Wayans, as star/co-writer/co-producer, plays Christian Black, a send-up of Christian Grey, the hunky, tormented billionaire sadist of E.L. James’ awful but addictive “Fifty Shades” novels. In the climactic scene where Hannah Steale (Kali Hawk in a takeoff on the virginal but curious Anastasia Steele) asks Christian to give it to her as hard as he can, he ponders her punishment by surveying the array of whips hanging on the wall of his Red Room of Pain. They’re labeled “Amistad,” “Glory,” “Django Unchained” and “12 Years a Slave.” That’s clever in itself. But then Hannah takes the notion further by turning the tables on Christian and doling out her own lashings – as retribution, she says, for the sufferings of Kerry Washington’s character in “Django Unchained” and Lupita Nyong’o’s character in “12 Years a Slave.”

(She also gets in a dig about how gratuitous it was that her “Fifty Shades of Grey” counterpart, Dakota Johnson, was naked for so much of the movie. While cutesy and meta, it’s also an excellent point.)

The moment ends quickly enough, and then it’s back to Hannah getting her head slammed between the elevator doors in Christian’s luxurious penthouse. But it’s enough to make you think, albeit briefly.

Mostly, “Fifty Shades of Black” is exactly what you expect it will be. It hits all the notes of its source material, only it amps them up, and it seems to get the inherent absurdity of this premise even more than Sam Taylor-Johnson’s movie did.

Fans of the series surely will enjoy revisiting key moments: the meet-cute when Hannah literally falls into Christian’s office on her hands and knees; the awkward interview for her college newspaper; Christian stalking Hannah at the hardware store where she works; the awkward photo shoot; the even more awkward coffee date; the first visit to the Red Room of Pain; the negotiation of a sexual contract. And they’re all connected by multiple aerial shots of the glittering Seattle skyline. That’s about it as far as cohesion goes.

Extended non-sequiturs and detours abound. Some work, like the bits that parody “Magic Mike” and “Whiplash.” Most don’t, like anything involving Hannah’s promiscuous roommate, Kateesha (Jenny Zigrino), a white woman wallowing in crass black stereotypes. (Then again, there’s probably a point being made there, too, about race relations. It just isn’t terribly sharp, and it’s easier to go for the broad gag.) Tossed-aside jokes about Bill Cosby, the films of Cuba Gooding Jr. and The Weeknd (whose original song “Earned It” from “Fifty Shades of Grey” received an Academy Award nomination) are hit-and-miss. A slapsticky scene involving a Taser and the Black Lives Matter movement falls flat; it’s simplistic rather than provocative.

But I will say this for “Fifty Shades of Black”: It made me laugh more often than I did in “Dirty Grandpa.” That is to say, I laughed more than once. And you really can’t ask for more than that in January. 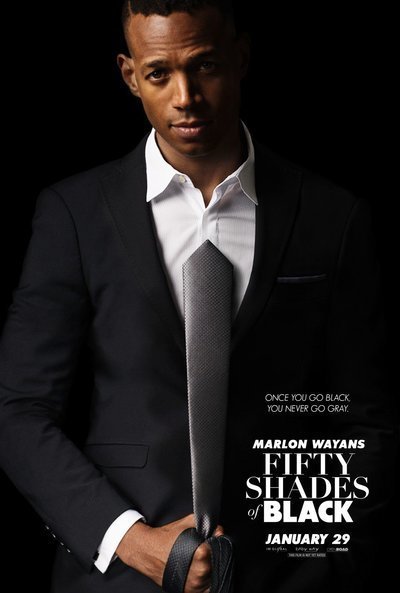 Rated R for strong crude sexual content including some graphic nudity, and for language throughout.

Alice Rietveld as Bride to Be