"Riddick" is the third film in David Twohy's "Chronicles of Riddick" saga. Starting with 2000's "Pitch Black," and continuing with 2004's "Chronicles of Riddick," audiences followed the exploits of Richard B. Riddick (Vin Diesel), outlaw, thief, murderer, king, and antihero. "Pitch Black" was an entertaining, yet derivative sci-fi/horror mashup that wore its R-rating proudly. "Chronicles of Riddick" is the series' "Conan The Destroyer," a tamer follow-up that lowered the rating in the hopes of extending the audience. I think the PG-13 rating on "Chronicles" and the fan complaints that accompanied it are the only reasons we have "Riddick." It quietly sweeps the second installment under the rug and asks forgiveness by overcompensating on the gory mayhem.

All three films in the series worship the character, but this one in particular has drool running down both sides of the screen. Its homoerotic gaze is evident in every frame; it swoons and demands that you know just how much of a bad dude Riddick is. And it loves him for it. Over and over, in scene after scene, you can hear Twohy's camera sighing like the biggest Riddick fan in creation. This is by no means a criticism. The absurd level of Riddick love is the film's most entertaining characteristic, even if you do want to yell out "Get a room!"

As Riddick, Vin Diesel uses his "Iron Giant" voice and a pair of glowing contact lenses that allow him to see in the dark. His narration opens "Riddick." "I've been here before," he tells us, referring to the dangerous terrain where he's been betrayed and left for dead. The opening credits aren't half-over before Riddick performs his first piece of badassery: He strangles one of the flesh-eating creatures that inhabit the planet. Before  the closing credits, we'll be privy to more monsters than Riddick can choke.

Twohy bucks the sequel tradition, working on the smaller scale of the original. At times, "Riddick" hews so closely to "Pitch Black" that it feels like a remake. Once again, people are trapped on a hostile planet and don't know if the bigger threat is the planet's inhabitants or Riddick himself. This time, Riddick is surrounded by two teams of bounty hunters, one of which wants him taken alive. The other prefers him dead because the bounty will be doubled. Neither team is any match for our titular antihero. They're even less equipped to deal with the monstrosities awaiting them once the planet gets dark and rainy.

The "dead Riddick" team is led by Santana (Jordi Mollà). He and his cohorts Moss (Bokeem Woodbine) and Diaz (Dave Bautista) respond to an emergency beacon triggered by Riddick in an attempt to "hail a taxi off this planet." Santana's most prized possession is a huge see-through box, in which he plans to put Riddick's head. You know what they say: Introduce a head-carrying box in the first act, expect a head to fall into it in the third. Santana is a nasty piece of work, a rapist who sets his female victim free so he can shoot a huge hole in her fleeing body. Moss and Diaz are amusingly incompetent, especially once the planet starts fighting back.

The "take Riddick alive" team is led by a hunter (Matt Nable). His team includes Dahl (Katee Sackhoff), a super-butch lesbian who provides "Riddick" with naked boobs, the bottom half of an attempted rape, and the occasional fight sequence. (Her punch sounds are louder than Riddick's.) Santana considers this team a major thorn in his side, but ultimately has to team up with them to capture their human prey.

Riddick squanders two opportunities to elevate itself above standard fare. The first occurs early in the film, when the stranded Riddick learns to navigate his new home. Twohy follows Riddick's routines in an excellent 25 minute sequence. The planet's landscapes are full of gorgeous details. The murderous CGI creatures Riddick fights are a bizarre mix of cleverness and cheesiness. Riddick also acquires a sidekick of sorts, a CGI-rendered hyena-dog hybrid Santana later calls a "dingo-dango thing." So help me, I fell hook, line and sinker for this dingo-dango thing. It's one of the best creatures I've seen in sci-fi in decades. Had the film just been Riddick vs. the elements, I'd have given "Riddick" a higher rating.

At least another half-star would have been in order had Twohy and company not squandered that second opportunity. During the film's climax, there's an operatic "Mother of mercy! Is this the end of Riddick?" moment that is truly compelling. I was shocked by how effective this sequence is, but neither the wrath of fanboys nor the studio's sequelitis problem would allow Twohy to bring this scene to its logical conclusion.

Twohy's script contains macho dialogue so ripe it's embarrassing to hear it. (It's Riddickulous! OK, I'll stop.) It's also jam-packed with graphic violence, so those with weak constitutions need not apply.  A vivisected brain in IMAX-sized closeup doesn't bother me, but your mileage may vary, so heed this warning.

"Riddick" is better than I expected, and it does provide a decent amount of fun for fans of the genre. Your enjoyment will depend on whether you're a fan of Diesel's character. While you won't need to see the prior installments to follow "Riddick," I've a feeling you'll get more pleasure if you bring your own supply of Riddick love. Because you won't be able to scrape it off the screen. 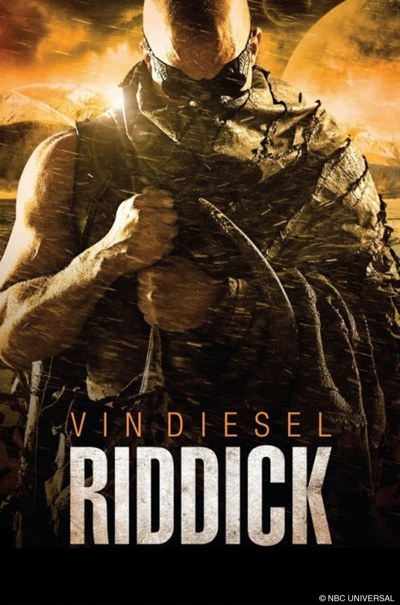