“Feeling Minnesota” is about people you are happy to meet in the movies although they would make you acutely uncomfortable in life. Everyone in the film is a lowlife of one description or another, and when a woman is insulted by being told she should have the word “slut” tattooed on her, perhaps this is no more than the truth: She makes love to her new husband's brother at her wedding, and later makes love to him again in a car, right after his mother's funeral (which does not reflect so well upon him, either, come to think of it).

To be sure, she married her husband in the first place only as a punishment--for him. Her name is Freddie (Cameron Diaz), and she is forced to marry Sam (Vincent D'Onofrio) by Red (Delroy Lindo), a drug kingpin who believes that Sam, his accountant, has stolen money from him. To find out why it would be a punishment to marry a woman played by Cameron Diaz, you will have to see the movie.

A flashback establishes that Sam and his brother Jjaks (Keanu Reeves) have been fighting since childhood. At the wedding, they engage in a vicious game of rock-scissors-paper. Soon Sam is boozing heavily and Jjaks is off to the bathroom for a torrid session with Freddie. And not long after that, Jjaks and Freddie go on the lam, which makes Sam and Red intensely unhappy. Freddie talks about the bliss to be found in Las Vegas, “where you get all you can eat for $4 and all of the towels smell like Downy fabric softener.” What more could you ask? If these characters were played at the level where they exist, “Feeling Minnesota” would be a docudrama of despair, depravity and bad hygiene. Remember that documentary “Brother's Keeper,” about the illiterate brothers who bunked together in the same shack and didn't bathe for months and were mighty fond of their animals? That's the milieu Jjaks and Sam come from, really. But Hollywood cleans them up real nice, and casts them with Reeves and D'Onofrio, and assumes that a world-class beauty like Diaz would consider it a step up to drop Sam for Jjaks, “who likes to spend all of his free time in prison.” And you know what? That's exactly how it works. By taking characters from the bottom of the barrel and casting them with beautiful people, Hollywood is able to create that ageless alchemy in which we equate physical beauty with personal worth, and so of course we want Freddie to dump Sam (who looks like an incipient Orson Welles) for Jjaks (who has a nice smile).

The movie was written and directed by Steven Baigelman, who must have gotten his characters all out of books and other movies, since I think it unlikely he could travel from their milieu to a movie contract in one lifetime. What he does with them is kind of nice. He creates a whimsical, grungy reality in which whenever the steamy love affair threatens to get boring, it is interrupted by an action scene. (I can remember back when action scenes got boring and were interrupted by steamy love scenes, but then that was back in the days when audiences liked sex more than guns.) Cameron Diaz is the discovery here. I first became aware of her in “The Mask,” in which she was a sex siren in a gown that looked spray-painted onto her almost cartoonishly perfect curves. Now, after seeing her in movies like “Last Supper” and “She's the One,” and in this lead role in “Feeling Minnesota,” I realize she has range and comic ability and is not only a sex bomb; she looks so warmly down-to-earth in these other films, indeed, that instead of praising a sex bomb for being able to play real, we should, I suppose, congratulate a real woman on being able to create the siren in “The Mask.” D'Onofrio is, as always, a substantial screen presence; he seems to block more of the sun than most actors, and has to be dealt with. You can't simply dismiss him with plot details. Reeves is very likable, and this film, coming after the enchanting “A Walk in the Clouds,” establishes him as one of the most gifted romantic leads of his generation.

So these people, with their talent and beauty, take dog patch material and redeem it. It's intriguing that young filmmakers are so fascinated by the sleazier aspects of life; maybe they think this material lends them an authenticity they otherwise lack. The tension between the slime fest milieu and the charm of the performances is maybe what makes “Feeling Minnesota” work; in its own way, this is as much a fantasy as “James and the Giant Peach.” 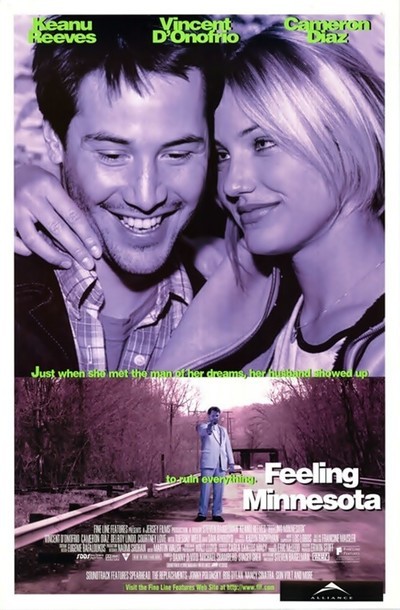