Raúl García’s “Extraordinary Tales” is an animated anthology film of Edgar Allan Poe stories narrated by luminaries like Christopher Lee, Guillermo Del Toro and even Bela Lugosi himself (using old audio footage). To be blunt, it’s kind of difficult to mess that up too much. Christopher Lee reading Edgar Allan Poe? Sign me up. Both the source material and the man reading it are legendary. And that inherent cool factor in “Extraordinary Tales” carries the final product a very long way, although its shortcomings do sometimes force me to wonder if it could have been a masterpiece instead of a mere curiosity. As is, a few decisions made by García in the filmmaking process hold “Extraordinary Tales” back from its true potential, although if it introduces filmgoers to the works of Poe (or Lee or Lugosi, for that matter), it’s done some good.

García and his team animate each short film in very different styles, coming back to a wraparound conversation between a raven and a statue in a cemetery between shorts. It starts with the amazing “The Fall of the House of Usher,” read by Christopher Lee. The animation is surprisingly flat, looking often like a last-generation video game with too much CGI, when hand-drawn would have given this atmospheric piece more punch. However, it’s easy to appreciate the budgetary freedom that animation gives García with “Usher," as the house falls apart in a way that would have cost a studio $80 million were it live-action.

In many ways, the second short story chosen is Poe’s most popular and the most interestingly conceived within “Extraordinary Tales.” A highly-truncated (they all are, and sometimes frustratingly so) version of “The Tell-Tale Heart” is told by a scratchy audio of the one-and-only Bela Lugosi, accompanied by starkly vivid animation in sharp blacks and blinding whites that’s meant to invoke famous comic artist Alberto Breccia. As a standalone piece, despite the edits to the source, this is a fascinating bit of cinema in that it captures influences from around the world, bringing Lugosi, Poe, and Breccia under one twisted tent.

“The Facts in the Case of M. Valdemar” (narrated by Julian Sands), “The Pit and the Pendulum” (narrated by Guillermo Del Toro) and “The Masque of Red Death” aren’t as effective, especially the final one, which may be the strongest visually but eschews all narration and has almost no dialogue to tell this tale only with images. I’m not sure taking away the film’s greatest asset—Poe’s way with words—was the smartest way to end the piece.

And that’s a feeling I had a few too many times in “Extraordinary Tales”—wondering why García made a certain visual choice, or why he cut a certain part of Poe’s stories while focusing on another (the whole thing only runs 73 minutes, when it would have benefitted by being twice as long and letting Poe’s brilliance linger before jumping on to the next piece). Again, Poe’s storytelling gift is so timeless, and the voice actors assembled so captivating, that “Extraordinary Tales” can’t help but work on some level. It just never quite rises above that faint praise. 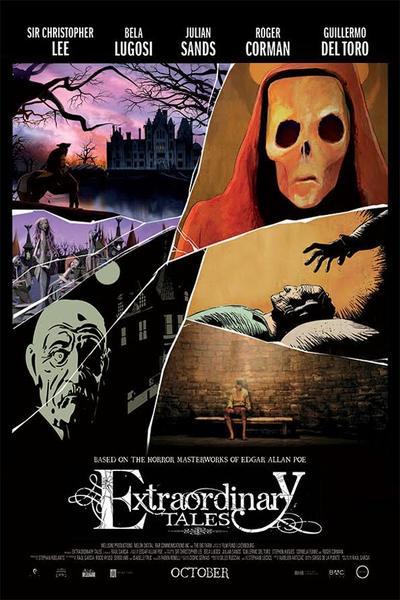 Julian Sands as Narrator: The Facts in the Case of M. Valdemar (voice)

Guillermo Del Toro as Narrator: The Pit and the Pendulum (voice)