"Everybody Has a Plan" is a pretty good existential crime thriller set in a snake-infested jungle swampland of Argentina. Its relaxed air of menace, and occasional bursts of violence hold one's attention even when the plot falters, which is often. Its chief virtue is its lead performance, in which twin brothers are played by a promising new Argentinian actor named Viggo Mortensen.

I kid, by way of confessing my delight. You know Mortensen from the "Lord of the Rings" trilogy, "Eastern Promises," "The Road" and other English-language films, but he's a multilingual, international actor who was born in Denmark and lived in Argentina and Venezuela as a boy. He's acted in Spanish-language films before — including 1997's "La pistola de mi hermano" and "Captain Altriste: The Spanish Musketeer" — but I missed them, so it was a pleasant surprise, almost a shock, to see him in "Everybody Has a Plan" ("Todos tenemos un plan") playing twin Argentinians who've spent most of their lives on opposite sides of the law.

Mortensen isn't just linguistically and physically convincing as Agustín, a Buenos Aires doctor, and Pedro, his swamp-dwelling, cancer-ridden, petty criminal brother; his posture, facial reactions, head movements, gait, hell, his gestalt are all different from anything I've seen in his English-language work — and because he's playing twins, he gives us two variations on those differences.

I already knew Mortensen as a versatile actor who could nail macho opacity ("Eastern Promises"), toxic alpha maleness ("G.I. Jane"), flamboyant, Method-flavored intensity ("The Indian Runner") and other spots on the Leading Man spectrum. But what he's doing here is even more impressive because it erases the memory of everything you've seen him do before. If he'd been credited with, “And Introducing Viggo Mortensen,” I doubt anyone would have complained. It's a discovery performance that would have launched an unknown actor toward stardom, but it's being given by someone you've watched for years. Neat trick, that.

I wish that writer-director Ana Piterbarg's film were as terrific as Mortensen's acting. The film is involving enough to hold your attention for two hours, and has a few viscerally or emotionally intense sequences, but it suffers from a problem that afflicts way too many crime thrillers with European art cinema ambitions: it matches an enigmatic hero with a rather shapeless story that feels less like a narrative, or even a philosophical argument, than a bunch of things that happen, and too many of those things feel too familiar, too easy. The characters are easy, too — less archetypal than stereotypical, or flat, or vague.

Agustín the doctor is unhappy — in one of his first scenes, he tells his wife Claudia (Soledad Villamil) that he suddenly doesn't want to adopt a baby they've spent years lining up, then retreats behind a locked door and totally withdraws from her.

A few scenes later, his brother Pedro, a part-time beekeeper and sometime felon, flees a botched kidnapping-killing to visit Agustín in the big city, tell him that he's about to die, and ask Agustín to impersonate him long enough to go into the swamp and finish some unfinished business involving a fat wad of cash. The rest of the movie becomes an impostor narrative. Agustín the doctor seizes the chance to start a new life and pretends to be his own brother. While Pedro wasn't exactly evil, he could be cold and amoral when he had to be. And he was comfortable around other criminals, the worst of whom is a Bible-quoting thug named Adrian (Daniel Fanego), an alpha dog who terrorizes and dominates everyone around him, including the lovely young Rosa (Sofía Gala Castiglione), the beekeeper's assistant that Pedro used to be sweet on.

"Everybody Has a Plan" wrings considerable suspense from the sight of a man pretending to be someone he isn't. Although Piterbarg gives us a few scenes of Pedro in his element — enough to establish the rough outline of key relationships — for the most part we're in the dark about the details of his existence, just like Agustín. Every time a character asks a question, makes a claim or asserts a basic fact, Agustín has to do the mental math and instantly decide what, if anything, he should say in response. This requires him to make deductions, play hunches and hope that whatever pops out of his mouth doesn't contradict the known facts of his dead brother's life — and reveal that he's the twin brother who left the village years ago because he was too soft to live there.

The riskiness of Agustín's predicament becomes clear the minute that he has an exchange with the family of a man that Pedro's criminality helped kill, in the presence of Sofia, whom Agustín never mentioned to him. He hasn't been in town for 24 hours and already people think he's acting strangely, because he is acting strangely; in fact, he's acting like someone else entirely, because he is someone else entirely.

I can see why Mortensen (or any actor) would be drawn to this sort of part. The challenge is to conceal the hero's motives and feelings from the other characters while revealing them to the viewer, and to lie to fictional characters while telling the audience the truth. Agustín/Pedro is a role that's not merely a role, but a comment on acting, and on life as a kind of ongoing performance. At its best, the film evokes that chilling quote from Kurt Vonnegut's Mother Night: “We are what we pretend to be, so we must be careful about what we pretend to be.”

But at its worst, "Everybody Has a Plan" evokes a lot of mediocre or otherwise disappointing thrillers that write philosophical checks that their scripts and directorial technique can't cash. We don't see enough of Pedro to understand him as more than a sketch of a man, and while Agustín appears in almost every scene, we don't really get to know him, either, much less understand why he wanted to throw away his cushy old life and risk violent death in the swamp.

Claudia is a betrayed, suffering wife whose story is simply dropped. For all her round-faced sweetness, Rosa never becomes more than The Girl, and Adrian's gimlet-eyed hatefulness goes from electrifying to tedious rather quickly, because you know he's just there to give an otherwise restrained film a jolt of menace. It's a good but never great movie. Every scene has something to recommended it — a complex reaction shot from Mortensen, a spooky shot of a boat winding up a Werner Herzogian steam-shrouded river, or a short-story-worthy detail, such as Rosa's haphazardly painted nails. But the movie doesn't add up to much besides a labor of love that's more fascinating to think about it than it is to watch. 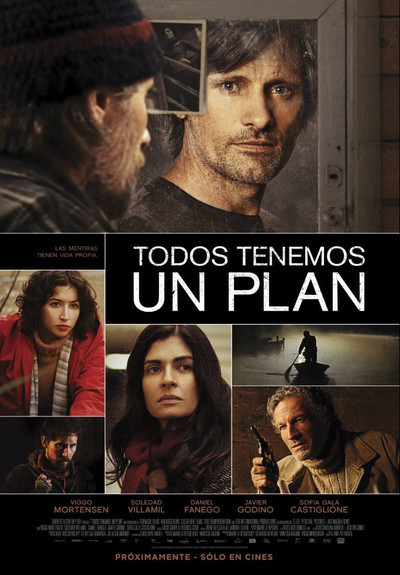 Rated R for some brutal violence, language and sexuality