Nothing like a trashy, all-hell-breaks-loose onslaught of blood, bullets and babes that borrows inspiration from a recycling bin stuffed with leftovers from ‘60s grindhouse films, Japanese horror, “Kill Bill,” “Saw” and splatter-fest videogames to cleanse one’s visual palate of those highbrow Oscar contenders.

In “Everly,” Salma Hayek throws herself with admirable abandon into the role of an avenging victim of sex slavery held against her will for years in a luxury high-rise apartment by misogynistic Asian mobsters. She exhibits such fire-breathing ferocity, it is hard to know whether this excessively cruel exercise in ultra-violence is exploiting her or she is exploiting it. Lord knows, she is by far the best thing about it.

The one-time Best Actress nominee for the splendid 2002 biopic “Frida” turned second-string player opposite Adam Sandler in those wretched “Grown Ups” comedies appears to have re-embraced her B-movie action roots. She hasn’t been such a red-hot pistol since the days of “Desperado” and “From Dusk Till Dawn,” and if the film does anything right, it reminds us that now-48-year-old Hayek is one heck of a forceful presence when she is allowed to be.

As they once said of Foxy Brown, her Everly is a whole lot of woman.

Too bad “Everly” itself is not exactly a whole lot of movie. What could have been a female-charged adrenaline rush is too hung up on queasy brutality and too quick to rely on a side plot involving Everly’s estranged mother and the toddler daughter she barely has gotten to know as a kind of counter-balance to the over-the-top nastiness.

Director Joe Lynch (“Knights of Badassdom,” “Wrong Turn 2: Dead End”) and writer Yale Hannon shamelessly borrow not just the contained space concept from the Bruce Willis classic "Die Hard" but also make ironic use of a Christmas setting—all the better to blare jazzy renditions of holiday tunes on the soundtrack while madness and mayhem messily deck the walls along with the halls.

“Everly” wastes no time going into carnage overdrive with at least 20 killings in the first 20 minutes. In a stylish overhead shot, we witness Hayek, naked save for the ornate Japanese tattoo on her back, dig out a pistol and a phone stashed in her toilet tank and don a skimpy slip from her dirty laundry hamper. She begins to systematically shoot the thugs lurking about that have been presumably beating and gang-raping her minutes before (we only hear her agonizing screams while the screen remains black). Everly also takes a bullet to the gut during the relentless gunfire, and the resulting holes are only slightly worse than those that riddle the script.

In between arranging to keep her mother and her cutie-pie daughter safe from harm and trying to contact a detective who promised to help her, she ends up having to single-handedly fend off a series of trained killers and prostitute assassins in fetishized costumes that pour forth from other apartments in the makeshift brothel. They come and go through Everly’s door like critters in a whack-a-mole game after being alerted that a bounty has been placed on her head.

A period of relative silence follows so certain plot details can be elaborated upon and for one dead body to briefly revive to provide Hayek with some human interaction. Everly is able to keep an eye on activity in the building via a video monitor and eventually realizes there is no escape while ever more threatening visitors arrive. Of particular note is a vicious attack dog named Bonzai who learns the hard way that grenades are not to be toyed with and the Sadist, a cravat-wearing creep who brings along a half-naked masochist locked in a cage.

It would take a Quentin Tarantino or maybe a Luc Besson to be able to smoothly blend such gruesome doings (the increasingly outlandish array of weaponry, from samurai swords to rocket launchers, is rather impressive if you are into such things) with scenes of matriarchal love and devotion. But Lynch and his writer are more adept at oozing guts than heartfelt emotion. And given the not-exactly-conducive circumstances, Hayek’s sexual charisma more or less goes untapped save for her body-clinging apparel (she eventually dons a low-cut tank top and yoga pants).

Odd how there are two current films in theaters about women being punished and abused for the benefit of men. Unlike “Fifty Shades of Grey,” however, “Everly” does not romanticize its intentions. It even allows room for a brief flicker of female dignity. When one of the bad guys taunting Everly looks around at the dead bodies littering her place and dismissively sneers, "That's a lot of dead whores," she angrily retorts, "You don't get to call them that." And that is as close to enlightenment as “Everly” gets. 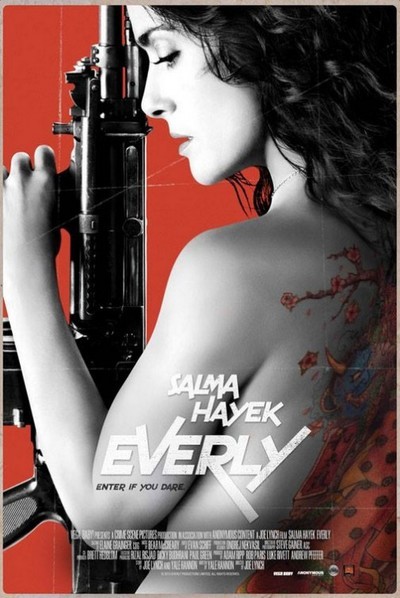