In 1982, Johnny Marr, Andy Rourke, Mike Joyce, and a young man named Stephen Patrick Morrissey formed a group called The Smiths. Arguably no British band of the ‘80s mattered more. The Smiths filtered Manchester’s working-class aggression through Morrissey’s once-in-a-generation voice and the band’s remarkably literary sense of lyricism. Who else could work in references to Keats and Yeats alongside relatable sagas of longing and insecurity? Some wrote them off as too emo, but The Smiths were way ahead of their time in every way, and helped define a sound of alternative music that still exists today. Even after they split, Morrissey remained a fascinating musical figure, releasing some solo music that was nearly as good as the stuff he recorded with Marr. How did this fascinating frontman come to find his voice? There’s clearly a biopic in Morrissey’s true story. You can hear it in the timbre of his voice and the wit of his lyrics. However, it is not in “England is Mine,” a flat, disappointing drama that casts Morrissey as a mopey teenager. The man who wrote “How Soon is Now?” deserves better.

The best thing about “England is Mine” is the performance of Jack Lowden as Stephen Patrick Morrissey. Lowden, the pilot from “Dunkirk” who wasn’t Tom Hardy, is a magnetic presence, one of those actors who screams “future star." But debut writer/director Mark Gill’s take on Morrissey is so flat and non-descript that Lowden’s natural charisma seems to be working against it at times. The film only comes to life when Morrissey does, briefly, in a moment of pre-Smiths fame. For the majority, Lowden feels restrained by a director who has a very specific, flat vision of a musical legend.

Set in Manchester in the late ‘70s and early ‘80s, “England is Mine” is mostly the story of a shy, lonely, brilliant young man who hates his job and looks at the growing music scene in his city from afar. He goes to concerts all the time—one of the best beats in the film is when his friend Linder Sterling (Jessica Brown Findlay) suggests that no one gets to a concert in time to see the opening acts and Morrissey insists that he does—and writes reviews of what he sees there. He looks at billboard postings for bandmates like a kid looks at puppies in windows. Linder helps open Morrissey up to his potential and the world of art. She pushes him to get on stage, joining a group called The Nosebleeds (which also had future Cult member Billy Duffy), and Morrissey sings a cover version of The Shangri-Las’ “Give Him a Great Big Kiss.” It’s the only musical number in the movie and it’s phenomenal, capturing that young energy that Morrissey would hone over the next few years of his life. The fact that it’s a centerpiece that’s never repeated is frustrating to a point that damages the entire final act of the film.

The reason it’s not repeated is that Morrissey’s time with The Nosebleeds was very short-lived. They moved on to London without him after getting an offer that didn’t include the lead singer, leaving Morrissey to mope in a dead-end job in a depressing city. What happens when you express what’s in your heart and then see your chance to become an artist pulled away from you? Did Morrissey’s understanding that it could all disappear with a phone call impact the way he wrote for and performed with The Smiths? Probably, but there’s not enough there for a movie.

To say that Gill’s approach to Morrissey’s life is “muted” would be an understatement. Sketching Manchester’s working-class drudgery in such flat terms not only feels like an artistically flawed approach to Morrissey’s origin story but doesn’t even feel all that genuine. Perhaps it’s unfair to compare, but I happened to see Mike Leigh’s “Meantime” for the first time this week as well, and that movie lives, eats, and breathes the everyday lives of Manchester in the early ‘80s in a way that this photocopy can’t capture. This film never feels genuine, and so then we have to wonder why make the artistic decision? So much of “England is Mine” seems like forced ennui, an impression of what someone who sang about depression and failure must have been like as a teenage boy. Linder quotes Oscar Wilde to Morrissey, “Be yourself, everyone else is already taken.” “England is Mine” never figured out itself. 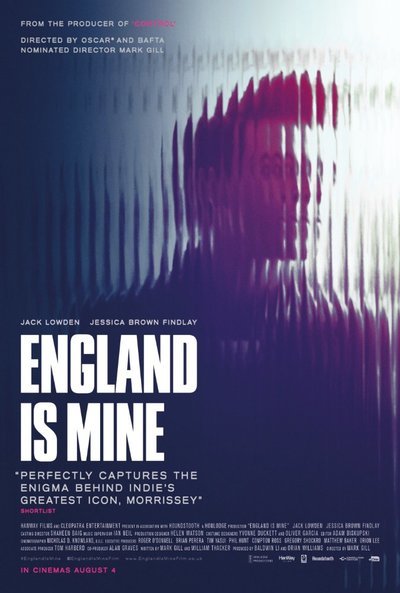