The American title of the Danish cop drama “Enforcement” is more unclear than it is ambiguous. Outside of the US, “Enforcement” was released as “Shorta,” which an introductory text explains is Arabic slang term for “police.” “Enforcement” leaves room for some interpretation, though it clearly suggests that cultural or environmental factors are the real source of the racial prejudices depicted in this siege thriller. We follow two Danish cops as they try to break out of the ghetto of Svalegarden during a race riot that was triggered by police brutality. The events that play out are therefore only important as a reflection of events that have already happened and must now be reckoned with.

If anything, the title of “Enforcement” suggests a level of moral relativity (or psychological complexity) that co-writer/directors Federik Louis Hviid and Anders Olholm never really aspire to. Granted, there’s not room for anything but a simplistic kind of identification with Hviid and Olholm’s characters given their plot’s focus and trajectory. This person of color is good because he wants to save (and therefore forgive) our white antiheroes, but this one’s bad because he’s defined exclusively by chest-thumping violence. And when the movie’s over, nothing is resolved that the filmmakers didn’t side-step or reduce to a few unconvincing symbols of hope for a more equitable future. You might like “Enforcement” if that’s a line you already want to buy; there’s otherwise not much here to change your mind.

“Enforcement” starts by nettling viewers with images of a young Muslim man in a chokehold. “I can’t breathe!” he cries. “Stay still!” says the cop. This wouldn’t be such a low blow if the image wasn’t the payoff to the movie’s opening sequence: we hear the young man’s cries before we see him because, when the scene begins, the camera is in the hallway, just out of view from the room where this unsettling scene takes place. So when we see who’s yelling “I can’t breathe!” that line only effectively gets a rise out of viewers. This man’s name is Talib Ben Hassi (Jack Pedersen) and his death—later, off-camera, from complicating injuries—is only important as an incitement to violence.

Svalegarden’s riot tests the resolve of bad cop Mike Andersen (Jacob Hauberg Lohmann), conflicted cop Jens Hoyer (Simon Sears), and good Muslim Amos Al-Shami (Tarek Zayat), the last of whom is detained and then dragged along by the movie’s white protagonists. Amos is the most interesting of these three characters since he hopes to be a “Big Brother,” or a mentor figure for younger community members. Big Brothers are also Guardian Angel-type neighborhood patrolmen.

Unfortunately, Amos is only a secondary character since most of “Enforcement” predictably concerns Mike and Jens, and how their actions in Svalegarden reflect their general character. Jens, who we’re told was a passive (but conflicted!) observer of Talib’s arrest, shares a manly sort of moment with Amos: “you throw like a b***h” he tells Amos during a pivotal scene. They both laugh. Mike, a racist who not only hates “gypsies” but was also an active participant in Talib’s abuse, does not fare as well.

There is, in that sense, a neat moral arc to the characters’ actions in “Enforcement,” and it’s executed without much charm or urgency. Every confrontation taps the brakes before courting controversy: in the most violent scene, Mike stabs an angry Rottweiler in the head. Doggy blood spurts all over Mike’s face as he, panting on an elevator floor, goes down. This is as close as “Enforcement” gets to a climactic moment since the movie’s ending does not otherwise give viewers the satisfaction of seeing justice done to Mike, the bad guy who we’ve only ostensibly learned, over the course of the movie, is also human enough to be laid out.

The rest of the movie’s violence is relatively unsensational since Hviid and Olholm seem to want to reassure viewers that social justice isn’t swift or tidy, especially during a crisis. So much of “Enforcement” only confirms that there are very fine people on both sides, like Amos’ mom Abia (Özlem Saglanmak), who re-assures Mike that “Being a parent is like having your heart walk around in the world unprotected.” Amos and others like him will go on, presumably after the events shown in “Enforcement,” to do the work that even a well-meaning cypher like Jens cannot. But this movie isn’t about them.

Hviid and Olholm spend a lot of time wringing their hands about the future of race relations, but always in flat, heavily filtered images. In a typically ungenerous shot, Mike, Jens, and Amos tramp through a puddle that reflects Svalegarden’s tenement-like high rises. The ripples they cast in that puddle make it hard for us to see the surrounding buildings … but our view wasn’t much to begin with. 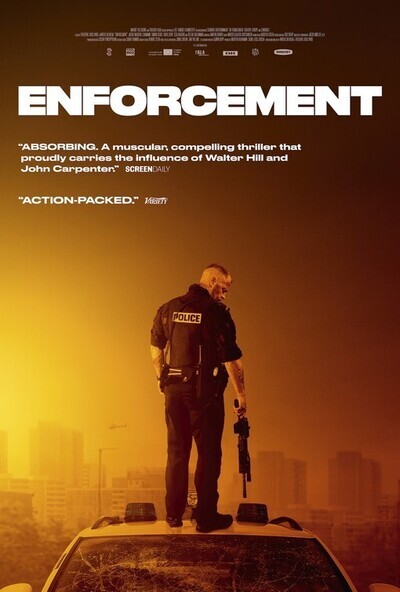