I confess: the cornball Hong Kong schoolroom melodrama "Big Brother" is everything I wanted it to be. Granted, I watched this film with carefully modulated expectations. After all, this is a corny, civic-minded "Stand and Deliver" clone that stars martial artist Donnie Yen as Mr. Chen, a generically tough-but-fair teacher who gives hope to a classroom full of would-be high school drop-outs.

"Big Brother" is, at its worst, as dramatically stale and unbelievably cheesy as an after-school special about the dangers of rolling with the wrong crowd, playing too many video games, and disrespecting your elders. But "Big Brother" also delivers a lot of simple pleasures in unexpected ways, like the fight scene where Yen beats up a gym locker full of cage-fighting mixed martial artists, or the emotionally overheated chase scene where a father and daughter emotionally reconnect while driving (and inevitably crashing) a pair of Go-Karts. The makers of "Big Brother" are so eager to please that I couldn't help but find their go-for-broke efforts to be endearing.

You've probably met a teacher like Mr. Chen before, if only in other movies. He's a man of the people: he drives a motorcycle, has served in combat, and wears appropriate blue-collar attire: a denim jacket (sometimes), blue jeans (always), a blue plaid vest, and a blue dress shirt (rolled up to the elbows, so as to teasingly show off one of his tattoos). Chen knows all of his kids' tricks--don't bother with the old Water Bucket on the Door Sill prank—but is also sensitive enough to know that bad students are a product of a rotten education system.

So when he sets out to help his liberal studies students, he starts by scrutinizing their frustrating home-lives and frustrated personal ambitions: bad boy Jack (Jack Lok) is poor and therefore tells his cash-poor grandma that he's a straight-A student with a part-time job, when he's actually cutting classes and working for a cigar-smoking Triad mobster; South Asian ukulele player Gordon (internet-famous Gordon Lau) wants to become a famous pop star, but is discriminated against because of his dark skin; tomboy Gladys (Gladys Li) wants to drive race-cars, but her dad hates that she's a girl; and twin brothers Chris and Bruce (Chris and Bruce Guan) only want to avoid their alcoholic dad long enough to respectively play video games and overcome Attention Deficit Hyperactivity Disorder.

So Mr. Chen makes like a butch Mary Poppins, touches up his already rolled-up sleeves, and starts winning over the hearts and minds of his most troubled students. He has an answer for every problem: if I can sing in public, you can sing, too! If your dad is a drunk, go with him to an Alcoholics Anonymous program! If you're hanging out with some gangsters, let me throw them into some gym lockers on your behalf in one of the film's two equally satisfying fight scenes! Yen's self-righteous character is, in that sense, a perfect ambassador of the irresistibly pushy optimism that "Big Brother" offers viewers. He delivers TED Talk-style lectures to stodgy school administrators. He talks to Jack's grandma in her home. He even kicks some naked extras in the junk (look, it doesn't make much more sense in context). Mr. Chen will make you feel good about yourself, and that's a promise.

That said, "Big Brother" is obviously not a sure-fire crowd-pleaser. You have to be able to roll with a bunch of Christian Rock-style song cues, with cut-and-paste refrains about how much you can do "when you believe" and you "keep your head up, keep your faith." You also have to accept several leaps in feel-good logic, like the weird notion that Chen's students should want to pass their college entrance exams just to prove to Mr. Chen's colleagues that his eccentric methods work (ie: Don't believe in yourself for you, do it for him!). You also have to wait a while before Yen beats up a bad guy in a brawl involving a fire sprinkler and a room-full of school desks.

But you might dig "Big Brother" if you can overcome these molehill-sized creative shortcomings. Yen throws himself into his role with disarming poise and arch sincerity. His apparent devotion to Chen's ideals makes you want to suspend your disbelief, and follow a guy who asks himself "what is the meaning of life" shortly before back-packing around the Great Wall while a computer-generated falcon soars overhead. He's also credibly dorky enough to make you overlook the fact that Chen doesn't seem to know how to wear a saddle bag (he slings it over one shoulder, like a murse, or a two-strap back-pack that's missing one strap). Still, you get the idea: "Big Brother" may not stand up to much scrutiny, but it gets the job done. 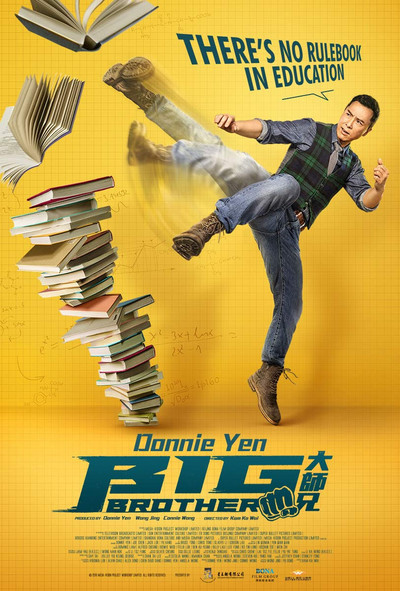