What happened after the good guys won

The poster for "Emperor" shows Tommy Lee Jones as Gen. Douglas MacArthur in gigantic silhouette, his corncob pipe nearly the same height as the American man and Japanese woman embracing at the bottom of the frame, deep in the embrace of what appears to be Forbidden Wartime Movie Love.

Only the title tells us this won't be your standard issue World War II movie.

In fact, save for flashbacks, "Emperor" is set in the immediate aftermath of the war. The embers are still burning through much of Japan, and the nation is on its knees, with the defeated Emperor Hirohito behind palace doors while MacArthur and his team debate his fate.

Indeed, this big-picture tale occasionally pauses for a star-crossed romance about an American college student turned soldier and the Japanese woman he continues to love even after their countries are at war. But, as is the case with most of the elements in "Emperor," the cliches are relatively few and spaced apart, and the tearjerking and profound moments are authentic and well-earned.

Matthew Fox's thin voice and chiseled looks make him seem more like a veteran of campus life than the worst war the world has ever known, but he nonetheless gives a solid performance as Gen. Bonner Fellers, who's given the task of overseeing one of the most crucial post-war American military investigations.

In a mere 10 days, Fellers must determine if Emperor Hirohito should be arrested and tried for instigating the war against the States and overseeing unspeakable atrocities —or if he will be allowed to remain in charge. The latter would send the message to the Japanese people that the post-war American mission is not to occupy and control, but to facilitate the rebuilding of the nation and the recovery of its people.

As "Emperor" tells it, MacArthur will make his decision almost solely on the basis of Fellers' report. (The general spends much of his time posing for dramatic photos and working the press as he eyes a post-military run for president.)

Tommy Lee Jones looks like he brought his own pants and demeanor to the set, then allowed the costumer to outfit him with uniform, sunglasses and hat, and instantly transformed himself into MacArthur. The performance is a bit hammy and Hollywood at times, with MacArthur occasionally delivering a one-liner so good you can practically see it on the screenwriters' laptop. But Jones adds welcome spark to a movie that more than once (make that more than twice) gets a little too bogged down in the details.

Whether Fellers is interviewing various Japanese officials during his investigation or reflecting on his romance with the niece (the lovely Eriko Hatsune) of a Japanese general, we're constantly reminded of the vast differences between the American and Japanese cultures. Director Peter Webber and screenwriters Vera Blasi and David Klass clearly have an enormous respect for and devotion to detail, but there were times when I wanted to raise my hand and say, "Is this going to be on the mid-term?"

"Emperor" is expertly photographed, whether we're following Fellers through the blue-tinged rubble of a bombed-out village or flashing back to the pastel-colored romance in the States. (I'm still not sure why it seems as if two out of three "remembering better days" flashbacks involve the man chasing the laughing woman through a forest, a field or at the beach. When you were falling in love, did you ever chase or were you the chasee in such a tableau?)

Not for a second is this some Fox News Channel-baiting, American retro guilt film. It was a just and right war for the Allied Forces, and the good guys won. But "Emperor" makes it clear this was a devastating war for both sides, with repercussions far beyond 1945. There's room to credit American and Japanese leadership for their joint efforts to find a common foundation for rebuilding, even as there was still simmering hatred in both quarters. "Emperor" is a solid and important look at a sometimes-forgotten chapter in the World War II saga.

Programming note: on the heels of "Lincoln," this makes two movies in six months in which Tommy Lee Jones has the pivotal supporting role in a piece of historical fiction with lengthy scenes explaining the procedural customs and intricate political mores of the time. Two excellent performances in two fine films — but I'm really hoping he doesn't sign up to co-star in a movie about Gerald Ford and the machinations behind the Whip Inflation Now movement. 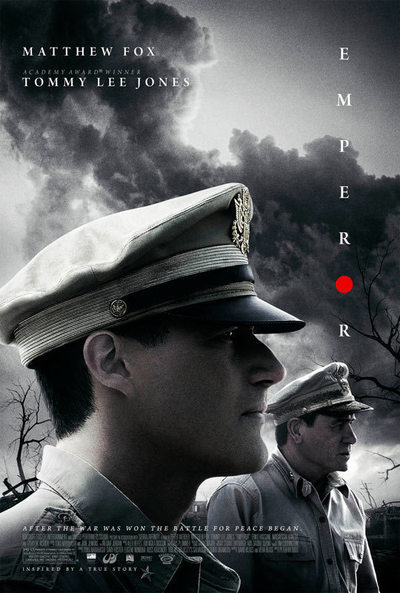