"Elephant," about an elephant herd crisscrossing the African veldt in search of water, is a variation on the same nature documentary that has been the Walt Disney Corporation's default since the 1960s, when the company aired similar tales on its weekly omnibus program "The Wonderful World of Disney."

These episodes were built from attentive photography of animals in their natural habitats but edited to downplay the animal-ness of the animals, the better to convince us that the creatures were worth caring about because deep down, they were people. The stories mimicked the conventions of fiction films, giving the main character (usually a young animal) a variation of Joseph Campbell's "Hero's Journey," complete with diligent attempts to master a skill, the death of a mentor or parent, and a climactic moment of actualization (the young mongoose catches the cobra; the baby birds fly from the nest; the bear cub finally figures out how to get honey from a beehive, etc). The narration was often cutesy, elbowing the viewer in the ribs whenever possible: "Just look at the little fellow go! He can't wait to eat those berries!"

This is "Elephant" as well. Narrated by Meghan Markle, the Duchess of Sussex, the film goes all-in anthropomorphizing its elephants in their journey across the Kalahari Desert to find water. The main characters are a cute little boy elephant named Jomo, his big sister Shani, and his mother Gaia, the herd's matriarch. Much of the focus is on Jomo, who's sooooooo cuuuuuuuuute that you can easily picture this same film being remade as a two-dimensional, "drawn" cartoon feature (something Disney doesn't produce anymore) or a hyper-realistic CGI blockbuster (like the recent remakes of "The Jungle Book" and "The Lion King").

The voice-over explains things that we could have understood from looking at the images. It rarely passes up the opportunity to drop in in a cliche ("elephants never forget" makes an obligatory appearance), indulge in not-so-clever wordplay ("when elephants need to drink, it's survival of the biggest!") or describe events in a manner that flatters  children by assuring them that elephants are just like them ("It's time for a pool party!" Markle exclaims over shots of elephants playing in mud).

There are stunning images of elephants, lions, antelope, birds and other creatures in their habitats. The best are the God's-eye view shots of watering holes joined by elephant trails, an image that evokes NASA photos of the surfaces of cracked and cratered moons. But hackneyed storytelling undercuts the visuals and makes them feel bland and devoid of character, like vegetables boiled until the taste is gone and only color remains.

Co-directed by Vanessa Berlowitz and Disney nature documentary veteran Mark Linfield (of the superior "Earth" and the slightly better "Chimpanzee"), and cowritten by Linfield and David Fowler, "Elephant" is content to stay in a groove as worn as the footpaths linking the pachyderms' watering holes. When the film does stray from expectations, the results overreach. Attempts to suggest the elephants' internal states through abstractly edited time-lapse footage feel like the filmmakers trying to assure themselves that they aren't going through the usual Disney motions even though they are.

Little kids, exhausted parents, and viewers who just want pretty pictures of elephants will be satisfied. Anyone not falling into one of those categories will look at the obvious expense lavished on every frame and wish that more can be done with this long running, still-popular genre, at long last. 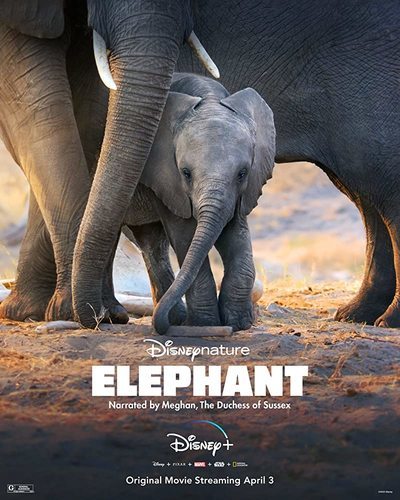