Back in the day, the two big counterculture sci-fi novels were the libertarian-division Stranger in a Strange Land by Robert Heinlein, which made the word “grok” a thing for many years (not so much anymore; hardly even pops up in crossword puzzles today) and Frank Herbert’s 1965 Dune, a futuristic geopolitical allegory that was anti-corporate, pro-eco-radicalism, and Islamophilic. Why mega-producers and mega-corporations have been pursuing the ideal film adaptation of this piece of intellectual property for so many decades is a question beyond the purview of this review, but it’s an interesting one.

As a pretentious teenager in the 1970s, I didn’t read much sci-fi, even countercultural sci-fi, so Dune missed me. When David Lynch’s 1984 film of the novel, backed by then mega-producer Dino De Laurentiis, came out I didn’t read it either. As a pretentious twentysomething film buff, not yet professional grade, the only thing that mattered to me was that it was a Lynch picture. But for some reason—due diligence, or curiosity about how my life might have been different had I gone with Herbert and Heinlein rather than Nabokov and Genet back in the day—I read Herbert’s book recently. Yeah, the prose is clunky and the dialogue often clunkier, but I liked much of it, particularly the way it threaded its social commentary with enough scenes of action and cliff-hanging suspense to fill an old-time serial.

The new film adaptation of the book, directed by Denis Villeneuve from a script he wrote with Eric Roth and Jon Spaihts, visualizes those scenes magnificently. As many of you are aware, “Dune” is set in the very distant future, in which humanity has evolved in many scientific respects and mutated in a lot of spiritual ones. Wherever Earth was, the people in this scenario aren’t on it, and the imperial family of Atreides is, in a power play we don’t become entirely conversant with for a while, tasked with ruling the desert planet of Arrakis. Which yields something called “the spice”—that’s crude oil for you eco-allegorists in the audience—and presents multivalent perils for off-worlders (that’s Westerners for you geo-political allegorists in the audience).

To say I have not admired Villeneuve’s prior films is something of an understatement. But I can’t deny that he’s made a more-than-satisfactory movie of the book. Or, I should say, two-thirds of the book. (The filmmaker says it’s half but I believe my estimate is correct.) The opening title calls it “Dune Part 1” and while this two-and-a-half hour movie provides a bonafide epic experience, it's not coy about connoting that there’s more to the story. Herbert’s own vision corresponds to Villeneuve’s own storytelling affinities to the extent that he apparently did not feel compelled to graft his own ideas to this work. And while Villeneuve has been and likely remains one of the most humorless filmmakers alive, the novel wasn’t a barrel of laughs either, and it’s salutary that Villeneuve honored the scant light notes in the script, which I suspect came from Roth.

Throughout, the filmmaker, working with amazing technicians including cinematographer Greig Fraser, editor Joe Walker, and production designer Patrice Vermette, manages to walk the thin line between grandeur and pomposity in between such unabashed thrill-generating sequences as the Gom Jabbar test, the spice herder rescue, the thopter-in-a-storm nail-biter, and various sandworm encounters and attacks. If you’re not a “Dune” person these listings sound like gibberish, and you will read other reviews complaining about how hard to follow this is. It’s not, if you pay attention, and the script does a good job with exposition without making it seem like EXPOSITION. Most of the time, anyway. But, by the same token, there may not be any reason for you to be interested in “Dune” if you’re not a science-fiction-movie person anyway. The novel’s influence is huge, particularly with respect to George Lucas. DESERT PLANET, people. The higher mystics in the “Dune” universe have this little thing they call “The Voice” that eventually became “Jedi Mind Tricks.” And so on.

Villeneuve’s massive cast embodies Herbert’s characters, who are generally speaking more archetypes than individuals, very well. Timothée Chalamet leans heavily on callowness in his early portrayal of Paul Atreides, and shakes it off compellingly as his character realizes his power and understands how to Follow His Destiny. Oscar Isaac is noble as Paul’s dad the Duke; Rebecca Ferguson both enigmatic and fierce as Jessica, Paul’s mother. Zendaya is an apt, a better than apt, Chani. In a deviation from Herbert’s novel, the ecologist Kynes is gender-switched, and played with intimidating force by Sharon Duncan-Brewster. And so on.

A little while back, complaining about the Warner Media deal that’s going to put “Dune” on streaming at the same time as it plays theaters, Villeneuve said the movie had been made “as a tribute to the big-screen experience.” At the time, that struck me as a pretty dumb reason to make a movie. Having seen “Dune,” I understand better what he meant, and I kind of approve. The movie is rife with cinematic allusions, mostly to pictures in the tradition of High Cinematic Spectacle. There’s “Lawrence of Arabia,” of course, because desert. But there’s also “Apocalypse Now” in the scene introducing Stellan Skarsgård’s bald-as-an-egg Baron Harkonnen. There’s “2001: A Space Odyssey.” There are even arguable outliers but undeniable classics such as Hitchcock’s 1957 version of “The Man Who Knew Too Much” and Antonioni’s “Red Desert.” Hans Zimmer’s let’s-test-those-subwoofers score evokes Christopher Nolan. (His music also nods to Maurice Jarre’s “Lawrence” score and György Ligeti’s “Atmospheres” from “2001.”) But there are visual echoes of Nolan and of Ridley Scott as well.

These will tickle or infuriate certain cinephiles dependent on their immediate mood or general inclination. I thought them diverting. And they didn’t detract from the movie’s main brief. I’ll always love Lynch’s “Dune,” a severely compromised dream-work that (not surprising given Lynch’s own inclination) had little use for Herbert’s messaging. But Villeneuve’s movie is “Dune.”

Opens in theaters on October 22nd, available on HBO Max the same day. This review was filed on September 3rd in conjunction with the world premiere at the Venice Film Festival. 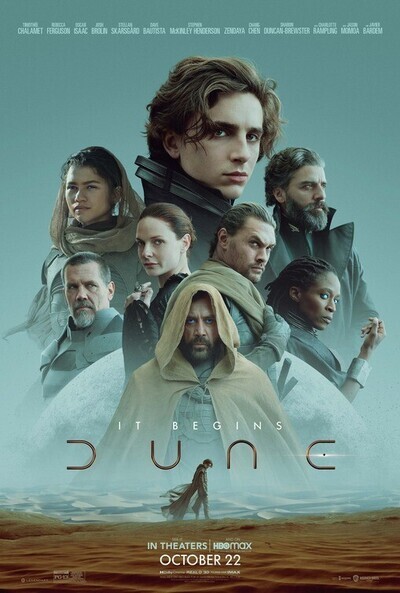 Rated PG-13 for sequences of strong violence, some disturbing images and suggestive material.

Writer (based on the novel written by)