John doesn’t know it, but he has the gift of precognition: He knows in advance when terrible things are going to happen. He somehow senses, for example, that his little girl has fallen into the water. He runs desperately toward the pond, but too late to save her, and the cry of horror that is wrung from his body reverberates through “Don’t Look Now.” Little does he know how things will get worse.

The movie is billed as a “psychic thriller,” and that’s fair enough. Its supernatural content (or ESP content, depending on your prejudice) is taken at face value; this isn’t a movie like “Rosemary’s Baby,” where you can never quite be sure there’s not some rational explanation. Almost all of it was shot in Venice, that fantastical city that anticipated the Gothic style, and the locations are so much a part of the effect that it’s impossible to imagine the movie being set anywhere else.

John (Donald Sutherland looking bearded and Christ-like) and his wife Laura (Julie Christie) are there because John is directing the renovation of an old church. His job seems to consist mainly of staring into the faces of ugly, fierce old gargoyles just as they’re about to tip off balance and send him crashing to the floor far below. That’s what the movie does best: Set up a feeling of menace and then surround its characters with situations filled with danger. Nobody is better than Julie Christie when it comes to looking uneasily over a shoulder or feeling a strange chill. But it’s John, the rationalist, who finally meets his doom. He won’t believe it when two old English ladies (visiting Venice to feed the cats, no doubt) tell his wife that they’ve had psychic communication with her dead daughter. The daughter’s dead, and that’s it, and we’ve got to live with it, he insists. And, naturally, he also doesn’t believe it when they warn him that his life is in danger and he should leave Venice immediately.

The movie was directed by Nicholas Roeg, whose previous credits include the uneven “Performance” and the unsung “Walkabout.” He’s a former cinematographer, and a genius at filling his frame with threatening forms and compositions. He uses Venice as well as she’s ever been used in a movie; he shot there in late fall and an early, dark, wet winter.

And Roeg gives us a love scene so well done; we almost want to applaud. But first, to digress, there’s a fight scene in Peter O’Donnell’s “I, Lucifer” in which Modesty Blaise is defeated because her enemy can see into the future and predict what she’s going to do next. Now make that a love scene, give Donald Sutherland precognition and throw away your sex manuals’ baby, because well, anyway, it’s effective and funny all at once. 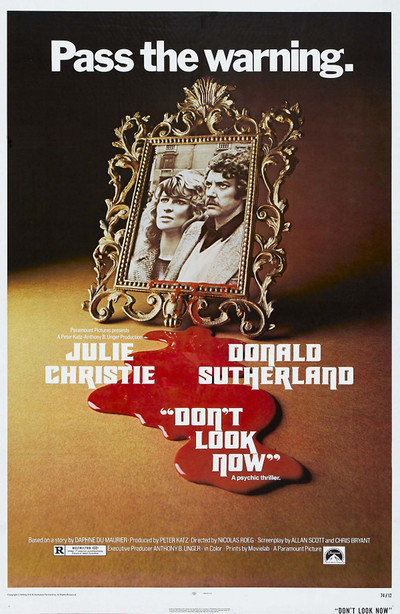