At its best, Fede Alvarez’s “Don’t Breathe” is a tight, confined thriller—the kind of morality play that toys with audience loyalty and works to convey its protagonists' predicament by making us feel claustrophobic right alongside them. For long passages, the movie plays out in real time, and Alvarez and his team have a remarkable sense of film geography, established in a beautiful unbroken shot that defines the space for this largely one-setting exercise in terror. Alvarez was also wise to reunite with “Evil Dead” star Jane Levy, an actress who can do a lot with very little in terms of character development and is remarkably fearless physically, and even wiser to cast Stephen Lang, a fantastic character actor for decades who has been given one of his most memorable roles here. Like a lot of films of this breed, “Don’t Breathe” gets a little less interesting as it proceeds to its inevitable conclusion, replacing tension with shock value, but it works so well up to that point that your heart will likely be beating too fast to care.

Rocky (Levy), her boyfriend Money (Daniel Zovatto) and wishes-he-was-boyfriend Alex (Dylan Minnette) rob houses in the wealthy suburbs of Detroit. Alex’s dad manages a security company and therefore has access to keys that allow for a lot less “breaking” in breaking & entering. Rocky has a horrible mother and a baby sister that she’ll do anything to get out of their dysfunctional and dangerous home. Tired of quickie jobs that net a few nice watches and some jewelry, Money stumbles on a possible crime that would truly change their lives. Deep in the desolate, rundown heart of Detroit—on one of many blocks with no neighbors and few active utilities—lives a blind man (Lang). A few years earlier, his daughter was killed in a car accident and he received a massive cash settlement that Money believes is in a safe in the house. Rocky, Money and Alex will just go in and take it. He’s a blind veteran who lives alone. How hard could it be?

The men of “Don’t Breathe” are given almost no defining character traits whatsoever, and that’s to the film’s detriment. You can feel Alvarez rushing to get to the centerpiece when he could have taken a beat or two to give us a reason to care about Money and Alex beyond the former being a tough guy and the latter being the nice one. Rocky/Levy fares a little better, as the actress imbues a few very short scenes with a palpable dose of urgency. She doesn’t rob for profit or need; she is stealing money that’s just sitting in a safe to save her life and that of her sister. She’ll get the cash, they’ll all flee Detroit to California, and everyone will live happily ever after. The complex morality of Rocky’s dilemma is one of the most interesting narrative elements of “Don’t Breathe.” In theory, we shouldn’t be rooting for a young lady to steal money from a blind man, but we do.

And that moral complexity takes a sharp turn when things go wrong in the main event of “Don’t Breathe.” Without spoiling nearly as much as the previews do, let’s just say that these three low-level criminals vastly underestimate both the current situation in their target’s home and its resident’s certain set of skills. The MVP of this midsection is arguably cinematographer Pedro Luque, who works with Alvarez to very clearly define the blueprint of the house and where our characters are within it. Unlike a lot of modern horror, which uses quick cuts and shaky camerawork to induce fear, Alvarez and Luque understand that we’ll relate to the predicament of “Don’t Breathe” the more clearly we can define what’s going on. As Lang and Levy play a game of cat and mouse through this maze, it’s best to know where the walls are. And, of course, it’s more effective when Alvarez and company pull those walls away in a basement that feels like a neverending series of shelves, replicating the protagonist’s confusion and fear.

There’s a significant twist in “Don’t Breathe” (again, don’t watch the previews) that produces shock value (and allows for even more disturbing material later on) but it almost feels like a misstep in that it pushes Lang’s character towards a definitive villain role. I like the idea of a battle of wills—in a home within an abandoned neighborhood—between characters that occupy grayer areas in terms of morality. There are also a few plot turns in the final act that require more suspension of disbelief.

At the heart of the film, as young people who made a very bad decision try to survive long enough to get out of a house that has turned into a fortress, “Don’t Breathe” is tense and even relatable. There are millions of young people, especially in Detroit, trying to escape their bad decisions. “Don’t Breathe” becomes a battle of wills between two people who have done very bad things but justified their actions to themselves. The talented Levy and Lang allow us to understand their characters' polarizing choices, and place us right there in the house—with the petty criminal and the man with the dark secret, holding our breath. 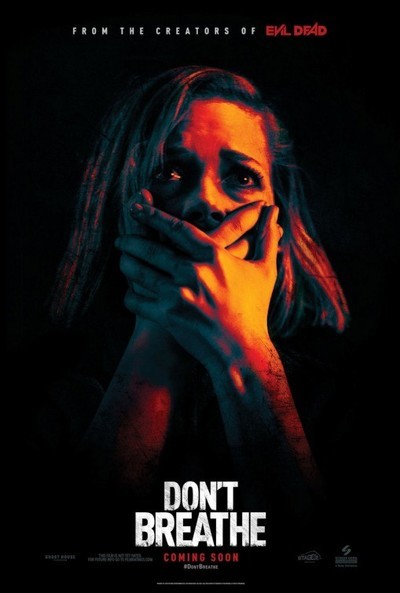 Stephen Lang as The Blind Man