On the surface, “Doctor Strange” pushes the Marvel Cinematic Universe in a bold new direction. By eschewing the usual stories of technologically-gifted playboys and noble super soldiers for a world ruled by magic, “Doctor Strange” feels fresh. It crackles with energy, moving from one plot point to the next, not wasting any moment. This was also the first time I ever noticed the musical score on my first viewing of a Marvel film—it doesn’t create an iconic theme for its hero but imbues the film with the appropriate mood. The visuals are electrifying and CGI is used very well to build a world far different than anything else we’ve seen in superhero adaptations recently. But for all of its wondrous world-building and trippy effects, “Doctor Strange” isn’t the evolutionary step forward for Marvel that it needs to be storytelling-wise. Underneath all of its improvements, the core narrative is something we’ve seen countless times.

Doctor Stephen Strange (Benedict Cumberbatch) is a genius, rich neurosurgeon with an ego that could rival Tony Stark’s. He moves through the world with little regard for the people around him. After being distracted looking at medical documents while driving (he may be smart but his ego makes him think he’s invulnerable), Strange gets into a brutal car accident that wrecks his hands. His scarred, trembling hands are a constant reminder of the man he once was and never will be again. This doesn’t make Strange rethink the way he lives. Instead, as one surgery after another fails, he becomes crueler and more withdrawn, even lashing out at ex-lover/co-worker Christine Palmer (Rachel McAdams), who is the last person on whom he can depend; his world of medicine and science has failed him. But after receiving a tip from Jonathon Pangborn (a charismatic, underutilized Benjamin Bratt), Strange finds himself under the tutelage of The Ancient One (Tilda Swinton) in Nepal, who opens him up to worlds he never believed existed. The visual landscape of their first encounter is the film at its most daring. We’re privy to worlds full of neon purples, cerulean blues and blood reds. We watch Strange become enveloped by hundreds of hands as if out of a nightmare. He bounces between dimensions that resemble the dark beauty of outer space to those that are a kaleidoscope of colors. Even a man as arrogant as Strange can’t deny what he’s been shown.

Strange may be a character that hews too close to the model of rich, egotistical white men with which superhero films are obsessed. But the film had the opportunity to do something different, by showing the interior of a character forced to rethink everything he knows and the nature of reality itself. Instead, "Doctor Strange" falls into some significant narrative mistakes.

One of the most glaring sins of “Doctor Strange” is how quickly Strange masters magic. There isn’t much tension in his arc. While he struggles briefly at first to keep up with other students The Ancient One has taken under her care, he’s soon stealing sacred books out from under Wong (Benedict Wong), the sharp-eyed master who protects the texts at The Ancient One’s behest. Strange plays by his own rules, growing far beyond the skills of those around him. He even goes as far as bending time, secretly reading from forbidden texts and wielding the Eye of Agamotto. When Karl Mordo (Chiwetel Ejiofor) remarks that Strange seems destined for this, I couldn’t help but roll my eyes. Of course he was.

In effect, Strange is proven right. Who cares about rules and breaking the laws of nature when you’re actually right, and in turn you save the world? Strange never grows much as a character since he proves to be right about far too much, justifying his ego and rank arrogance. Cumberbatch is having considerable fun with the role (although he brings nothing unexpected) but he can’t distract from how nothing in Strange’s story feels earned. You also can’t ignore that “Doctor Strange” is essentially the story of a white man who travels to an “exotic” land, whose culture and people he doesn’t respect let alone know the language of. Yet somehow he just happens to realize he’s a natural at magic and gets good enough to beat practitioners who have been doing this for years.

In this way, “Doctor Strange” reveals the precarious place in which superhero films find themselves. Director Scott Derrickson and Marvel Studios President Kevin Feige have repeatedly defended this movie's controversial casting. They’re very aware of the increasing expectation of audiences. But it isn’t enough to cast actors like Benedict Wong and Chiwetel Ejiofor in supporting roles, you have to give them something interesting to do. And as fun and light as “Doctor Strange” is, it is impossible to ignore the problems inherent in casting Tilda Swinton as The Ancient One.

Swinton inhabits the sorceress with her trademark oddity and cutting humor. It takes only a careful tilt of her head or blithe remark to Strange to believe this woman has lived for hundreds of years. In many ways, Swinton’s presence seems to be from another film entirely—one that would truly embrace the weirdness of the premise beyond some trippy visual effects.

Derrickson and co-writer C. Robert Cargill have spoken at length about the decision to cast Swinton in a role that was originally a Tibetan man in the comics. They feared casting an Asian man or even woman would mean the character would fall into well-worn stereotypes. So, they whitewashed the role. If the only way you can bypass these issues is to whitewash the part (yet keep the Asian setting and vague mysticism), the problem isn’t the character, it’s your lack of imagination as a creator. The filmmakers behind “Doctor Strange” may be well-intentioned but that doesn’t soften the racism threading the movie. Despite the desire to be inventive, “Doctor Strange” unfortunately repeats many of the mistakes of its predecessors beyond uncomfortable racial politics.

There are many great actors that color the film's margins, but “Doctor Strange” doesn’t make the best use of them. Rachel McAdams plays one of the most poorly written superhero love interests I think I’ve ever seen. She has a warm, flirtatious energy that is a welcome addition to the movie. But she isn’t a person so much as a convenient prop forgotten about for long stretches until Strange needs her.

"Doctor Strange'"s worst sin in terms of casting comes in its villain. At this point, has any major franchise wasted as many great actors in thinly-written villain roles as the MCU? Mads Mikkelsen is an amazing actor who often creates an alluring mix of darkness, pathos and passion. His unsettling screen presence is perfect for this kind of story. But Kaecilius, a former pupil of The Ancient One, has such muddled motivations and little interiority that Mikkelsen is surprisingly forgettable. Strange’s battle with him ultimately comes down to being in the wrong place at the wrong time. Strange doesn’t care about being a hero. The juxtaposition between Kaecilius and Strange is one of the more ill-thought out central conflicts from a blockbuster in a long time. They aren’t battling because of opposing ideologies or deep emotional history. They’re simply an inconvenience to each other. If anything, Mordo’s obsession with order would make him a more compelling foil for Kaecilius.

Undoubtedly, the best aspect of the film is its rich visuals. From costume design to CGI to its framing, “Doctor Strange” is a visual feast in ways superhero films rarely are. In the Mirror Dimension, in which the magic of the characters won’t affect people in the real world, the characters cut loose showing off the extent of their abilities. Buildings break apart, fold into each other, reform in ways reminiscent of “Inception.” Almost every scene bursts with color—crimson, marigold, neon purples, inky blacks. “Doctor Strange” at times takes on the language of video games in ways I’ve never seen before, with its characters being dwarfed by grand, collapsing buildings. The laws of physics are inconsequential here. And after a while the Mirror Dimension feels claustrophobic, a problem that ultimately comes down to the world-building. We get mere sketches of how any of this works. Sure, it’s thrilling to watch. But without understanding the impact of the magic in the Mirror Dimension or the ripple effect of playing with laws of physics it’s hard to feel thrilled, scared or awed after a while. In the end, the beauty and visual effects of “Doctor Strange” are frustratingly weightless.

Even with these considerable faults “Doctor Strange” can also be charming. It’s a spry film brimming with great details, striking imagery and joy. It pushes the MCU into a fascinating world full of magic and villains that exists beyond our understanding of time and reality—maybe next time they’ll do something interesting when they get there. 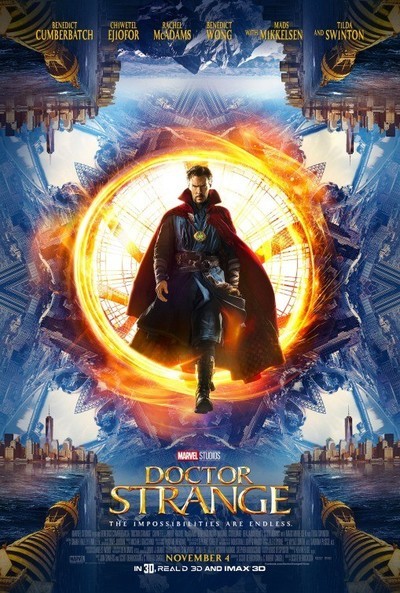 Rated PG-13 for sci-fi violence and action throughout, and an intense crash sequence.

Tilda Swinton as The Ancient One