In the second scene in Joe Swanberg's latest film, "Digging for Fire," public school teacher and husband/father Tim (Jake Johnson, who also co-wrote the script with Swanberg) discovers a rusty gun and a bone in a hill outside the house where he and his wife Lee (Rosemarie DeWitt) are vacationing. Tim tells his wife excitedly, "Now my brain thinks there are twenty bodies here!" Lee is less than enthused. Besides, it's not their hill out there. You can't just dig up somebody else's hill.

By the time Tim finds the gun and the bone, the ultimate story, what the film is really about, in other words, has been set up with dispatch. Swanberg and Johnson do not "bury the lede." They foreground it. The gun and bone discovery is the excuse to tell a story about marriage vs. independence, impending mortality, and existential questions like, "What do I want in life? What does my life mean? Is this all there is?" Maybe the gun and the bone will be too obvious a device to some, but plot devices like that are often really useful. Besides, "Digging for Fire" is an often hilarious film, a kooky ensemble drama filled with specific and funny performances from a host of stars who stroll into the action from the side, do their thing, and then get out.

In many ways, "Digging for Fire" is reminiscent of Woody Allen's "Manhattan Murder Mystery," a similar story about a sedate couple (played by Allen and Diane Keaton) who become convinced that their next-door neighbor has murdered his wife. Keaton's character re-directs her baseless anxiety about her marriage into trying to solve the mystery: she breaks into apartments, goes on "stakeouts," says things to her husband like, "I'm going to bust this case wide open!", all as he looks on thinking she has lost her mind. "Digging for Fire" has the same obvious structure and screwball mood. It's strangely refreshing to watch a film that is not worried about nuance. There's plenty of nuance in the issues the film explores (not to mention in all of the performances), but without the gun and the bone there might not be the same sense of urgency and absurdity.

What really matters is not the "whodunit" of the gun and the bone. What matters is the marriage of Tim and Lee. The marriage is not exactly on the rocks but they have stopped connecting. Lee has taken on a Mommy role with her husband. Her parents (Judith Light and Sam Elliott) want to foot the bill for an expensive preschool and Tim feels emasculated. Meanwhile, Lee reads a book called "The Passionate Marriage" in secret (the book becomes a running joke throughout the film), and has emotional conversations about life with various Uber drivers.

Lee goes off to get together with a friend (Melanie Lynskey) and Tim stays "home." He's supposed to do the taxes but instead he invites over all of his crazy buddies (Steve Berg, Mike Birbiglia, Chris Messina, Sam Rockwell) who promptly get wasted, do nude cannonballs in the pool, and bring along random girls. Tim is disconnected from the bacchanal and rallies everyone to help digging into the hill. Sam Rockwell plays a jaded self-absorbed lunatic who says to one of the more reticent guys, "If you're not gonna dig, how 'bout getting us some hookers?" Digging for human bones makes Tim feel important and manly, and one pretty girl named Max (played by Brie Larson) gets sucked into the mystery with him.

If Max is Tim's crush for the night then Ben (Orlando Bloom), a motorcycle-driving restaurant manager, is Lee's. The film cuts back and forth from Tim's night to Lee's night, the action swift and funny but with plenty of time for poignancy and conversation, as well as the random magic events (like looking at Saturn through a telescope) that help make life worth living. The script uses the familiar devices of "dude-bros on the prowl" and "nagging unhappy wives" and twists them inside out, intertwining them, reveling in the ridiculous nature of the roles assigned to us. If one thinks that "Digging for Fire" is going to turn into "Hangover IV", Swanberg and Johnson have other things in mind.

Swanberg's films sometimes have a tendency to just sit there, the frame static, the action stalled. 2013's "All the Light in the Sky" had beautiful performances and an interesting set-up, but the execution felt muted and fuzzy. "Digging for Fire" sparks with life in comparison, moving from humor to loneliness to screwball to those piercing moments when human beings, against the odds, are able to connect, to those seemingly tiny moments of revelation when a truth is revealed.

"Obvious" shouldn't be a dirty word for writers or film-makers. A lot of scripts could use more "obvious." Not simplistic or reliance on cliches, but an open statement of purpose, a clarity of theme. Tennessee Williams was not afraid of being obvious: he put his themes right out there in his titles and had no fear in stating said themes as strongly as possible in the script. "Digging for Fire" wants to talk about serious topics and it wants to do so in a humorous light-hearted way. It succeeds. 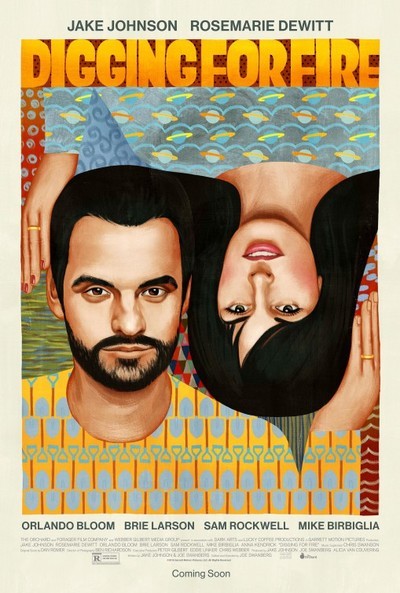