All the Light in the Sky

Jane Adams has a sweet baffled sadness that brings an empathetic response from an audience. You feel protective of her. You want her to do well, be happy. She had only two or three scenes in "Eternal Sunshine of the Spotless Mind" and that character vibrated with an entire life and back story that went on off-screen as well as on. She has been giving excellent performances for over 20 years now, both in independent film and repertory theater across the United States. Her latest, "All the Light in the Sky", is another collaboration with "mumblecore" director Joe Swanberg, this time in a script she co-wrote with him. There are so many powerful themes suggested in the script, having to do with aging (particularly for women), and losing your sexual power, and Adams, yet again, commands the screen with authenticity and simplicity, but the film lacks commitment. It comes across as a pebble skipping off the surface of much deeper waters. The themes are treated casually, almost offhandedly, and while that is not necessarily a bad thing, "All the Light in the Sky" remains extremely slight in feeling and tone, afraid of its own implications.

Adams plays Marie, a middle-aged actress renting an apartment that hangs over the Pacific Ocean, the waves rolling under her porch. She is still up for parts in films, but those roles are going to Kristen Wiig now, and Marie, talking with her agent on speaker-phone, is a good sport about it, and says that sure, she will sign on for a new indie that has no budget but "at least it has a start date", which means it's real. She is not married. She has no children. She has no boyfriend. She falls asleep listening to inspirational audio books about philosophy and religion, and wakes up every morning to don a wetsuit and go paddle boarding in the ocean. She meets up occasionally with an expert in solar energy, interviewing him as research for what we assume is another role. He talks about different gadgets that can harness the power of the sun, an obvious metaphor which drags the film down, the rest of it being so feather-light it can't take such gravitas.

Marie's niece, Faye (Sophia Takal), is an aspiring actress and comes to stay with her aunt for a while. Marie thrills to the role of Aunt, passing on her wisdom to Faye based on her years of experience in the industry. There are revealing moments here, obviously close to Jane Adams' heart, about being a 20-something actress and watching all of your friends start to become successful, leaving you behind. Adams relates these truths as she makes complicated healthy juices in her blender, often sidestepping the sheer pathos of her tale through laughter and a good attitude, but the sadness that flickers on the edges of her worried eyes is eloquent.

Faye is an undeveloped character, albeit beautifully played by Takal. Aunt and niece are not peers, but they are both adults now, and there is a comfort in family that is clear in the energy between them. The introduction of a young woman into Marie's world, a young woman just starting out on the path of the same career, seems like it would be ripe with opportunities for conflict. No conflict comes, leaving their interactions to sit there on the screen, flat and shallow. The most fascinating moment in the film is when Marie confesses to her niece that she misses looking forward to taking off her clothes when she is with a man for the first time, that now that she is older she gets nervous and insecure. Marie says that when she was younger she felt that she, the woman, had the pressure to be "the engine that got the whole thing started", the object, and now that she doesn't have that anymore, she feels lost. It's an electric confession, honest and scary, suggesting a gigantic world of loss, the unnameable sadness of losing your sexual power.

But the whole film is so casual about all of it, and Swanberg, who seems more interested in finding the beauty in some of the images he frames (more so than he has in his other films), doesn't do much with the frame once he sets it up. Actors sit and talk within the frame, often in one long take, and the "event" of the scene, whatever it may be, starts to loosen, lose focus, fall apart. Many of these scenes feel like really productive rehearsals, improvisation exercises for the actors to find out their motivation and objective. But everyone sitting around talking doesn't lead us anywhere. The film starts to feel opaque, hidden under a veil of its own casual attitude. And the final image, which is a stunner, doesn't open us up to deeper understanding. It just sits there, static, beautiful and not much else. 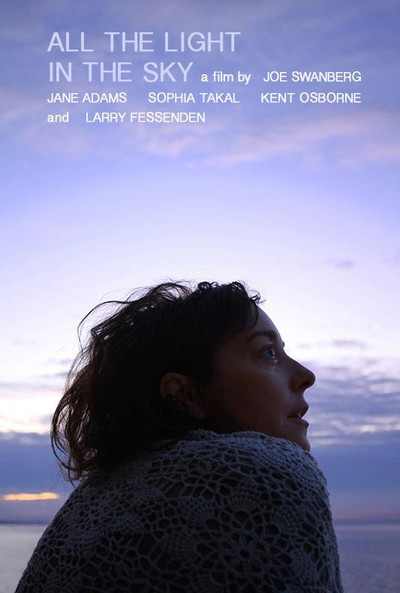