The new Portuguese/French/Brazilian co-production “Diamantino” could technically be described as a political satire but anyone going into it expecting the hard-edged humor of a “Dr. Strangelove” or “Wag the Dog” will soon realize that it's not quite like those earlier works—probably around the time that the gigantic fluffy puppy dogs first make an appearance. Instead, it takes a far more whimsical approach that suggests a weird hybrid of “Being There” and “All the World’s a Stooge,” the 1941 Three Stooges short in which Moe, Larry and Curly are taken in by a rich woman who is inexplicably convinced that they are child war refugees, as presented by Michel Gondry at his absolute Gondriest. The results are uneven—how could they not be?—but the sheer weirdness of the whole enterprise has a charm to it and it certainly is never boring. Bewildering, maybe, but never boring.

Let us go back to those fluffy dogs for a minute. They are manifestations in the mind of Diamantino (Carloto Cotta), the star striker for Portugal’s soccer team, that allow him to filter out all distractions and hit the shots that have made him an idol on the level of real-life Portuguese soccer player Cristiano Ronaldo. Alas, one day, the power of the fluffy dogs fails Diamantino and he misses a crucial shot that prevents his team from advancing to the World Cup final and he becomes a pariah in his home country and a laughing stock around the world. This would be hard enough for most people to bear but we soon realize that Diamantino is basically a big kid himself who is innocent in most of the ways of the world—not only do the sheets on his bed have his face and logo emblazoned on them, it is evident that he has never had anyone into his room to share them with him.

In an attempt to do some good and honor his recently deceased father, Diamantino decides to take in a refugee to live at his palatial estate, much to the consternation of his cruel and abusive twin sisters (Anabella and Margarida Moreira), who mistreat him even as they are robbing him blind. The “refugee” turns out to be Aisha (Cleo Tavares), a lesbian Secret Service agent working undercover as a teenage boy from Mozambique to investigate suspicions that Diamantino is involved with a money-laundering scheme. That, not surprisingly, is the work of his sisters and if that were not enough, the two have embroiled their uncomprehending brother into a plot by Portuguese nationalists to leave the EU. Such a scheme includes an elaborate ad campaign focused on Diamantino as the epitome of Portuguese manhood, as well as machinations from a mad scientist determined to harvest the source of his greatness that winds up calling certain aspects of his manhood into question.

So yeah, “Diamantino” is strange as can be and then some, but the problem that it's not as outrageous as it clearly wants to be in terms of the details. The material involving the shifting nature of the relationship between Diamantino and Aisha, whose true identity as an adult woman he remains blissfully unaware of for much of the narrative, would seem to be tailor-made for the kind of cheerfully transgressive humor that the writing/directing duo of Gabriel Abrantes and Daniel Schmidt are clearly aiming for but never quite achieve. Likewise, the more overtly political material involving the nationalists duping Diamantino into participating in their anti-EU campaign leans a little more towards the innocuous than the incisive. The stuff involving the mad scientist and the unexpected results of her experiments on Diamantino are absurd enough but enter the proceedings inn such an arbitrary manner that it fails to land the impact that it might have had with a more focused screenplay.

And yet, even though “Diamantino” never quite digs beneath its aggressively goofy, candy-colored surfaces to deliver truly penetrating satire, it still manages to hold one’s interest for the most part. As a comedic collision between the not entirely dissimilar worlds of political and popular culture and the mayhem that can ensue when the two intertwine, the film has a likable oddball energy that is further boosted by an outlandish visual style that's reminiscent of what the legendarily over-the-top 1967 version of “Casino Royale” is like at its best moments. "Diamantino" is also blessed with a number of random bits of strange humor that wind up hitting more than they miss, ranging from the aforementioned bed linen to several hilarious needle drops on the soundtrack. Best of all, it has a performance by Cotta as Diamantino that is perfectly calibrated so that he comes across less as a moron, which is what might have resulted in the hands of lesser actors, than as a genuine innocent—a Candide of the soccer pitch—who we find ourselves laughing with instead of at. Admittedly, a film like this may not be to all tastes, but those with a taste for the silly and the strange should get a kick out of it. 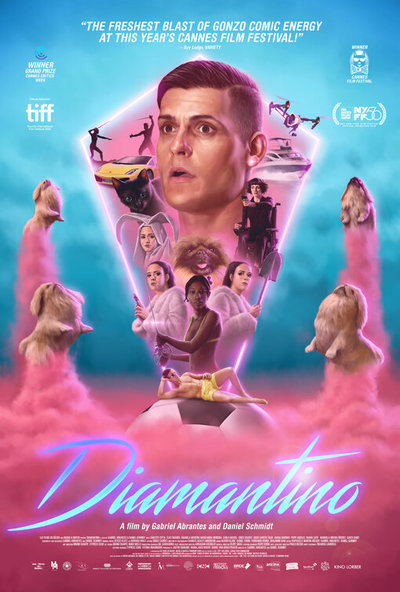