The month of January, long a cinematic dumping ground for films that the studios have precious little faith in, has become a inexplicably fertile time for cheapo horror films. They pop up in the multiplexes and make back their budget and then some on the strength of a strong opening weekend fueled by bored teenagers with no interest in Oscar bait, then quickly fade into obscurity. The latest aspirant for future heavy rotation on the lesser cable channels is "Devil's Due," a bit of Satanic silliness that is so derivative and dull that it makes such gumdrops as "The Devil Inside" and "The Last Exorcism Part II" seem borderline competent by comparison—that is, if anyone watching it could stay awake long enough to make the comparisons.

Our tale kicks off as newlyweds Zach (Zach Gilford) and Samantha (Allison Miller) jet to the Dominican Republic for their honeymoon. On their last night out, they get lost and accept a ride from a cabbie who offers to take them to a cool underground party on the outskirts of town. After a night that they can barely remember, the couple returns home and almost immediately discover that Sam is pregnant. Vegetarian Sam develops a taste for red meat, their OB-GYN mysteriously vanishes and is replaced by another guy, Sam beats up an SUV that nearly hits her in a parking lot and a First Communion ceremony that the couple attends ends in more bloodshed than is normal such an event. While I wouldn't dream of giving away any key plot details, I will suggest that the title is almost as spoileriffic as "Lone Survivor" and leave it at that.

"Devil's Due" is one of those films that borrows so many key elements from other and often better movies that genre buffs could amuse themselves by composing lists of all the titles that it blatantly rips off throughout—"Rosemary's Baby" is the obvious leaping-off point for Lindsay Devlin's screenplay but there are bits and pieces from everything from "The Exorcist" to the "Paranormal Activity" series entire—oh yeah, the whole thing is staged as one of those found-footage deals in which the characters continue filming even when all hell is literally breaking loose—find their way into the narrative as well.

This might not have been so bad if co-directors Matt Bettinelli-Olpin and Tyler Gillet (whose previous credit was a similarly-themed segment from the horror anthology "V/H/S") had figured out some creative spin on the familiar, but they apparently spent all their time and energy trying to justify the found-footage gimmick and had nothing left for the rest of the film.

Even if you aren't a student of movies of this type, there is nothing here that will feel especially fresh. Long stretches of aimless padding are occasionally punctuated by failed "Boo!" moments. Things gets so dire after a while that the film actually trucks in three previously unseen teenagers to boost the body count and satisfy the gorehounds in the audience. The only thing about the whole enterprise that makes even the vaguest impression is Allison Miller, who remains rather fetching even when she is getting the full Pazuzu or stuffing raw hamburger in her face.

Even if you have no interest in seeing "Devil's Due," you may have seen the film's admittedly clever viral advertising campaign, in which New Yorkers are startled by an animatronic demon baby popping out of its carriage. Hopefully when the movie hits Blu-ray, the producers will remember to include some of this footage amongst the other bonus material. Actually, they might be better off simply releasing the hidden camera footage as the main feature and sticking the entirety of "Devil's Due" in the deleted scenes section where it belongs. 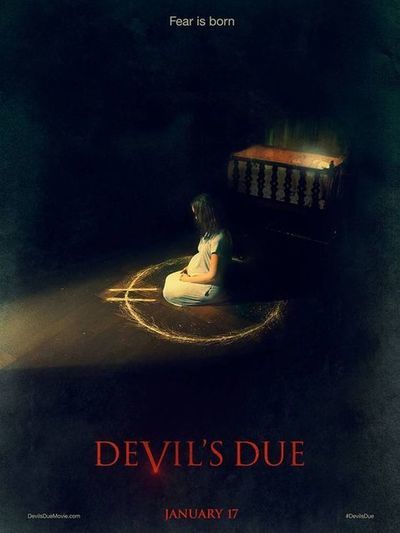