"Lone Survivor" burns with the fever of a passion project. Writer-director Peter Berg's gratitude to United States servicemen for all their sacrifice comes through viscerally, from first frame to last. The film opens with a long montage of real-life Navy SEALs in training and ends with a slide show of SEALs and soldiers living full, happy lives off-duty, set to an emotional power ballad. What's in between amounts to "The Passion of the Christ" for U.S. servicemen: a bloody historic episode recounted mainly in images of hardy young men being ripped apart, at screeching volume. Though Berg's source material isn't the New Testament, he often handles Navy Seal Marcus Luttrell's account (via ghostwriter Patrick Robinson) of his doomed 2005 reconnaissance mission with the thunderous reverence Mel Gibson brought to Christ's crucifixion and resurrection.

A veteran actor, Berg shows a much subtler touch with ensemble performances. Scenes of elite warriors busting each other's chops and joking through the terrifying moments of anticipation between battles capture the essence of jocular group chemistry. I'm thinking of the cocky FBI agents in Berg's "The Kingdom" and even the high school football players in "Friday Night Lights". It's clear that he dug into the Average Joe details of Luttrell's book, with dialogue that encompasses the boys' love of the movie "Anchorman: The Legend of Ron Burgundy" and the newlywed jitters of Matthew Axelson (Ben Foster). Mark Wahlberg as Luttrell, Taylor Kitsch as Lieutenant Michael Murphy and Emile Hirsch as Danny Dietz contribute natural charisma and intelligence under Berg's downright doting eye.

The best example of this is an exquisitely controlled sequence in which the SEAL Team 10 members use an Afghan hill to surveil the compound of Taliban leader Ahmad Shah (Yousuf Azami). Berg builds the tension by keeping our view restricted to the four Seals perched in their positions, barely camouflaged by low pine branches, and their point-of-view of the valley. They chitchat as if they were back at the base to burn off their anxiety—which, of course, heightens ours. Gradually, their geographic advantage becomes their trap. This slow transition from routine reconnaissance to insane firefight reminded me of a forest battle in John McTiernan's unlikely combat classic, "Predator".

Of course, "Predator" was a sci-fi action flick, which meant that it could easily afford to let the tension explode into popcorn-friendly thrills. "Lone Survivor" has to negotiate with the truth. Berg is at heart an action director, so his way of restraining the urge to Rambo-fy his heroes in the interest of this film's patriotic agenda is to double down on their suffering. Whenever one of the Seals gets shot, the sound effects make us intimate with the bullet's progress through flesh, bone and vital organs. The sound of a lung aspirating blood in ragged gasps has never been so vivid. Under a rain of projectiles, the Seals tumble down a roughly 65 degree jagged mountainside, smashing into giant rocks as they go, falling and flailing for so long, in a series of edits so gorgeously fluid, that I began to think about great experimental films but also that moment in "Eddie Murphy Delirious" where Aunt Bunny took forever to fall down the stairs. Yet the men keep going. Limbs fail or fall off, blood pours out, but so long as at least one eye can peer through a scope and one finger can reach the trigger, each soldier will fight to the death.

From there, the film gets tipsy on heroism. Pashtun villagers hostile to the Taliban take Luttrell in, patch him up and defend him as if he were their own. They gently scrape away his panic and distrust, despite having no translator between them. As with "The Kingdom", the foreigner who stood by our American hero has an emotional moment with him, an exchange of glances and an embrace that communicates understanding between freedom fighters: Loyalty and courage have no national or tribal boundaries.

Made with Luttrell as a close consultant to Berg, this film has a sincerity and sense of respect for the troops that shouldn't be confused with profundity.  "Lone Survivor" means well, but what it has to say about the costs of modern warfare is nothing new or especially illuminating. It's cut from the same cloth that was once fashioned into the Pat Tillman legend and the Saving Private Lynch saga, honoring sacrifice in imagery that the American war machine can easily fashion into a recruitment commercial.   "Lone Survivor" makes political interests superfluous to the religion of the warrior, which is all about enduring whatever hardship is thrown at you while protecting the brother at your side.

What this story really curses is all the faulty equipment and poor operational planning that imperiled Luttrell and his brothers. They fret over broken radios, phones and unavailable helicopters. Never mind about Academy members voting on this one early next year: let's see how many Congress members have seen "Lone Survivor" the next time a bill to expand defense spending is on the table. 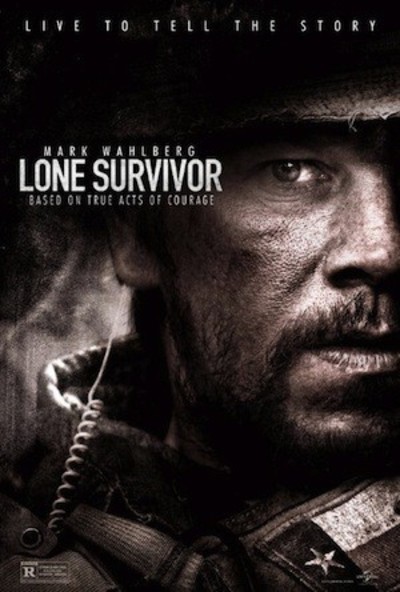