A lot of people are not going to like “Destination Wedding,” because the characters never shut up and complain all the time. But I thought it was a hoot. Winona Ryder and Keanu Reeves, in their fourth film together, are clearly having a blast, and they won me over.

Lindsay (Ryder) and Frank (Reeves) meet at the airport, waiting for an eight-seat plane to take them to California wine country for a wedding. After they have bickered at the airport, the hotel, the rehearsal dinner, through the games and activities and the wedding itself, and are now back at the hotel, they are at the moment when love should be triumphing over all with a tender embrace. But this isn’t that movie. Lindsay asks Frank, “What if the real destination is falling in love?” Frank’s response is, “What if you never say that again?” He means it.

The title of “Destination Wedding” may make it sound like a Hallmark Romance film, but this is a romantic comedy with very little romance, and the comedy is not based on gentle misunderstandings. It is strictly in the hyper-verbal, twisted category.

Frank and Lindsay start arguing seconds after they meet, when he steps in front of her at the airport gate. She accuses him of trying to get a better seat and compares him to “investment bankers, politicians, terrorists,” and everyone else with no manners. He says he stepped away just to get farther from her. It begins to dawn on them that they may be going to the same event. Lindsay: “How many destination weddings can there be in Paso Robles?” Frank: “I was hoping there were two.”

The music shifts from low-key but cheery jazz from the charming score by composer William Ross to a trumpet trill like the opening of a bullfight as we see the film’s title, followed by its more telling alternate: “A Narcissist Can’t Die Because the Whole World Would End.” Subsequent chapter title cards let us know that we are not here to be beguiled by the ostensible charms of the countryside or the festivities, by the welcome baskets or the tour of the winery. The real feelings of Lindsay, Frank, and the movie itself about the various events are revealed because what they think is shown but scratched out: “Just what the world needs – Another Goddamn sunset wedding.”

Lindsay is the groom’s ex. Frank is his half-brother. Neither of them wants to be there. They don’t like the couple getting married. They don’t like anyone at the wedding. In fact, they pretty much don’t like anything, except maybe for not liking people, gatherings, or the idea of love.

Professionally, they appear to be opposites. Frank works for JD Power, which gives out excellence awards to corporations. Lindsay goes after companies for bias and poor citizenship, or what Frank terms “a career in reverse fascism.” But their jobs have something significant in common. They both judge everyone. And at the tedious rehearsal dinner, they find a companionable rhythm in coming up with wordy but hilarious comments on the other guests, who exist in the film only to be insult fodder.

Frank and Lindsay are the entire movie. The rest of the cast is dressed in neutral tones and hardly get a chance to say a word. Ryder and Reeves stand out in dark clothes and never stop talking nonsense and complaining about everyone, even in the midst of what has to be one of the most ridiculous sex scenes ever filmed. But when Frank and Lindsey are annoying each other most, Reeves and Ryder still have an easy charm and a sparkling chemistry together that gives their characters’ anxieties enough good humor to keep us on their side.

Writer/director Victor Levin (“Survivor’s Remorse,” “Mad About You”) has clearly suffered through cutesy weddings where the welcome basket includes fun facts about the history of the area and coupons for foot massages. You know, the weddings where the couple puts out helpful baskets of flip-flops labeled “Walkin’ Shoes,” because guests have to trek through mud and grass in party clothes to get to the picture-perfect ceremony. This is his revenge, like your snarkiest friend’s nasty commentary on a wedding video, or the romantic comedy version of David Foster Wallace’s essay on cruises, “A Supposedly Fun Thing I'll Never Do Again.” As with Wallace’s cruise, the destination wedding might not be fun, but seeing Reeves and Ryder suffer through it is. 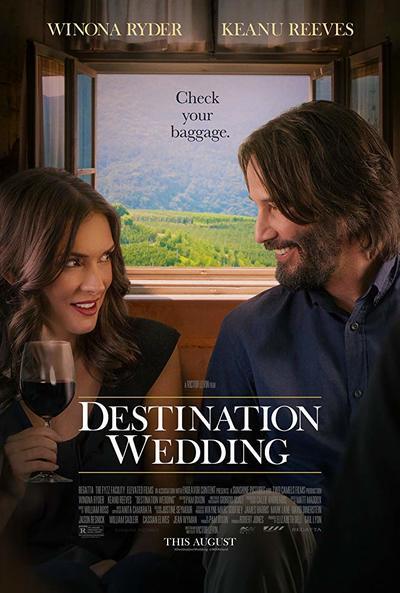