The trailer for "Delivery Man" tells you almost everything you need to know. The one thing it fails to mention is that this is a remake of a 2011 French-Canadian film called "Starbuck." If you've seen "Starbuck," you know that "Delivery Man"'s trailer is full of spoilers. But then again, if you'd gone out and seen "Starbuck," there probably wouldn't be a "Delivery Man," at least not this soon.

But I digress. Writer-director Ken Scott returns to helm the American version, an act that is not without precedent: George Sluizer and Francis Veber did the same for "The Vanishing" and "Three Fugitives" respectively. Those were very bad ideas, as the sharp edges of the originals were completely sanded down to a smooth, unsatisfying and dull finish. "Starbuck" has as many sharp edges as your average circle, so all that's deleted from "Delivery Man" are a few naughty words and some masturbatory humor, lowering the rating on the remake to a PG-13. Why should a 12-year-old be denied his or her wish to see a movie about some old guy with 533 kids?

Vince Vaughn steps into Patrick Huard's role as David Wozniak, delivery man for the family butcher shop. David is a fortysomething slacker whose police officer girlfriend is tired of his laziness. She is also pregnant, and David is useless enough for her to consider ejecting him from the baby's life. David vows to be a good, responsible and supportive father to his firstborn, which might be hard to do with that $100,000 in loan shark debt he has hanging over his head.

In an attempt to make his payments, David is illegally growing pot to supplement his income. Considering how bad David is at deliveries, I'm surprised Wozniak's Butcher Shop isn't bankrupt. In his 8-hour work day, David manages to get two parking tickets and his delivery truck towed. Like Officer Girlfriend, David's dad and brothers are also fed up with his actions.

Things get worse for Davey. Arriving home, he finds a strange man in his apartment. (How easy it is to get into David's apartment is a running joke left uncommented on in the remake.) The man informs David that he is the father of 533 children, enough to fill an entire season of paternity tests on "The Maury Show." Alas, David is no Wilt Chamberlain; the offspring are due to his 696 sperm donations, not to his incredible prowess with the ladies. The sperm bank kept giving David's deposits, listed under the pseudonym "Starbuck," to customers. Now 142 people want to know "who's their daddy."

"Yo no soy David Wozniak!" yells David every time the man from the sperm bank tries to explain his predicament. Had David said "Ja nie jestem Dawid Wozniak!" he might have gotten away with it. Instead, David must seek the legal counsel of his apparently disbarred friend, Brett (Chris Pratt). Brett, a father of four, warns David both of the horrors of fatherhood and the dangers of opening the envelope containing descriptions of the plaintiffs in the lawsuit.

David opens the envelope—we'd have no movie if he didn't—and sets out to be a "guardian angel" to many of his kids. Brett warns him of the legal ramifications of this, but hard-headed David keeps inserting himself into situations. The trailer tells you how all this plays out.

Vince Vaughn can be a ray of sunshine in even the worst movies (see "Be Cool" for the best example of this). Here, I just didn't buy him as a loveable sad-sack. Huard looked like the scraggly personality inhabiting David Wozniak; a sense of desperation emanated from him. Vaughn's interpretation lacks this element, so his grasps for redemption take on a bland, selfish edge. Vaughn keeps him at arm's length, so his big speeches make us feel as if we're being conned.

You may think it unfair that I make comparisons between "Starbuck" and "Delivery Man." Truth be told, my rating is higher because I'd seen "Starbuck." Had I not, "Delivery Man" would have been intolerable. I felt numb while watching this movie, and I laughed not once. What kept me remotely interested was observing if the same successes and mistakes from the original would occur. Will "Delivery Man" give a happier ending to David's interaction with the disabled son he visits? Will a retail job once again cure heroin addiction? Will David's newly reinstated lawyer win the case? Will Officer Girlfriend respond to having 533 stepchildren the same way in this version? Are there any changes in the plot or the material?

I'll answer that last question, as it's not a spoiler. Plotwise, this is the exact same movie as "Starbuck." The English dialogue even sounds as if "Starbuck's" subtitles were being read aloud. The one difference is that I felt an emotional tie to the original's David Wozniak, which guided me over the narrative's bumpier, less believable aspects. I rooted for Huard's second chance, but not Vaughn's. Without that element, the seams in the story become distracting. You pull at them, and the movie falls apart. 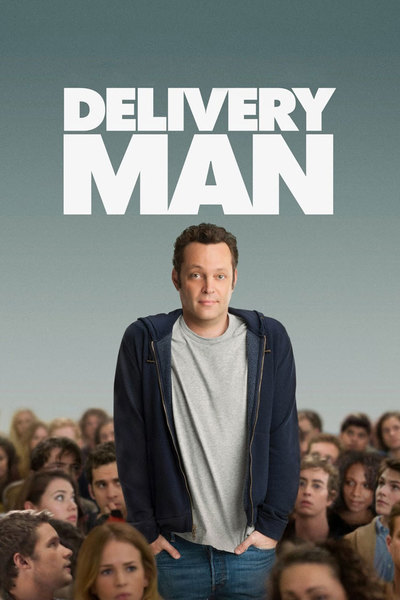