Death And The Maiden

It is a dark and stormy night. In an isolated house on a deserted landscape, a woman waits alone. The opening moments of "Death and the Maiden" are so intriguing that almost any continuation would be a disappointment - but movies have to be about something, and so slowly the purity of the situation settles down into the business of the plot. But not before the woman, played by Sigourney Weaver, has made an indelible impression.

She is angry and deeply troubled. She is expecting someone, and has a chicken in the oven and a bottle of wine prepared. Then she hears a news bulletin on the radio, and her mood turns to rage. She eats her own dinner, savagely jabbing it with a knife, and dumps the rest in the garbage. She is acutely aware of the night outside. When the man she is waiting for appears, he has been given a lift by a stranger. She conceals herself in the bedroom, and pretends to be asleep. The two men talk and drink. She creeps out into the night, steals the stranger's car, and drives away.

The visitor is distraught to have his car taken - to be marooned, in thanks for his good deed. The two men sit on the steps and continue their conversation. One man is her husband, Gerardo Escobar (Stuart Wilson). The other is a neighbor named Dr. Roberto Miranda (Ben Kingsley). The men become friendly, confiding. It is very late, there is no way to leave the house, and so the visitor agrees to bed down on the couch in the living room. He seems drunk, convivial, but the moment the husband disappears a chemical change seems to take place, and he is thoughtful and self-possessed.

He goes to sleep. The woman approaches the house quietly, steals into the living room, and is able to surprise the visitor and tie him up before he can resist. She believes he is a torturer - the man who raped her 14 times when she was a political prisoner. She never saw him, because she was blindfolded, but she knows his voice, his way of using little phrases like "itty bitty," and even his smell. She knows it is him.

That is the setup for Roman Polanski's film, based on the play by Ariel Dorfman. In the movie's long night of the soul, the man, bound to a chair, will protest his innocence. The woman will jeer at him and cross-examine him. And her husband will waver first in one direction and then in the other, because this Dr. Miranda is a charming man and a very intelligent one, and if there is a way for him to talk his way to freedom, he will find it.

"Death and the Maiden" is said to be based on events in Chile, but it could take place in any of the many countries where rule is by force and intimidation. It is, to some degree, about actual guilt: Is this the man who raped and tortured her? To another degree, it is about the nature of guilt and human identity: If this is the same man, has he perhaps changed? Was he a product of the times - even a victim of the times, which forced some to be torturers no less than requiring others to be victims? If he is guilty, does he repent? Is there forgiveness for his crime? Does the woman, by making him a captive and taunting him, descend to his level? Is her husband in some way caught up in a male bonding with this man against women - an instinctive camaraderie that requires him to join forces with any man against any woman? All of these questions lurk tantalizingly under the surface of "Death and the Maiden," making it richer than its materials might promise. The story is not about whether this is the same man who tortured her, but about the question: What then? There is even the subtle suggestion that - if he was the man - he was not as cruel to her as he might have been, might even have shown her some twisted kindness, during those dark days when an evil society forced captors and their prisoners to enact the rites of torture.

Yes, and it is even more complex than that. Because the whole story leads up to a long monologue by the doctor, brilliantly delivered by Ben Kingsley, so that we must answer not only the question of his guilt or innocence, but the question of its meaning.

"Death and the Maiden" is all about acting. In other hands, even given the same director, this might have been a dreary slog.

Kingsley makes it come alive with his insinuating performance as the accused rapist: He makes his character so smart we have a certain admiration for his struggle. He is powerless, except for his wits, but they are formidable. The logic of the story places him at its center, but without the Sigourney Weaver performance it would still probably not work. There must have been the temptation to play up the rage of her character, but she brings so many other colors to this woman. There are times, during the dialogue, when we feel we have almost been transported back through time to the actual events she remembers.

What of the third character, the husband? Played convincingly by Wilson as a man who would genuinely like to know the truth, he is a surrogate for us: A jurist who will chair a panel to get to the bottom of those tragic years. But his wife knows (and the man strapped to the chair knows) that no panel can answer, or understand, the nature of the situation. Only the torturer and the tortured have shared that information, and perhaps only by changing places can they understand it. Always assuming, of course, that she has strapped the right man to the chair. 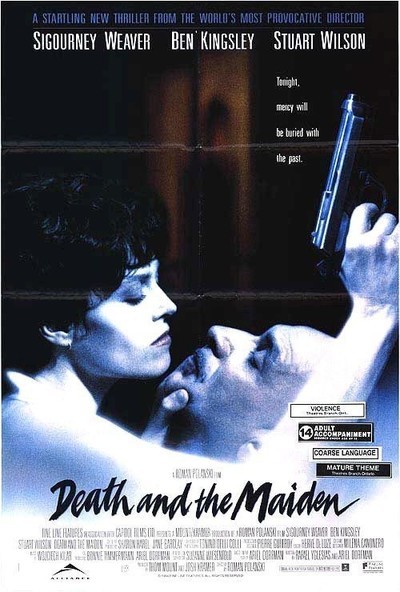 Rated R For Strong Language, Including Descriptions Of Violent Situations