A high-concept animated film about animals with superpowers is brought to vibrant, endearing life by the superpowers behind the scenes: lively voice talent from an all-star cast, a script that is smart, exciting, and very funny, and, above all, the ability to tap into one of humanity’s deepest emotions, our love for our pets and theirs for us. Comedy too often comes from a place of skepticism, opposition, or irony. But here, the most hilarious moments come from a deep understanding of and affection for comics. Okay, maybe there is some snark in the joke about smooth jazz.

But the more you love the world of superheroes, the more you will appreciate seeing Superman toss his pet dog, Krypto, a squeaky toy shaped like Batman. And you will appreciate it even more when my new favorite Batman, voiced by Keanu Reeves, comments darkly (of course), “I hope that toy is licensed.” It may take a second viewing to catch some of the smallest details, like Krypton’s red sun and the reference to needing someone to say his name backwards. Be sure to stay all the way to the very end of the credits for one more DC Comics in-joke featuring the man behind the voice of Krypto, Dwayne Johnson.

Krypto and Superman (John Krasinski) have been best friends since Kryptonians Jor-El and Lara tucked tiny Kal-El into a rocket ship as their planet was exploding and puppy Krypto jumped in at the last minute to keep the future Clark Kent/Superboy company. In present day they work as a team to keep everyone safe from bad guys, both those from Earth and those from other planets. Krypto loves being Superman’s best friend even more than he likes saving the world. That is until Superman starts spending a lot of time with his girlfriend, intrepid reporter Lois Lane (Olivia Wilde). And then a very powerful supervillain uses green Kryptonite to take away Superman’s powers and holds him and the rest of the Justice League captive.

I’ve often said superhero movies should be judged on their bad guys, and the one in this story is a lulu. Literally. But let’s back up a little bit. Superman is worried about neglecting Krypto as he prepares to propose to Lois, so he takes him to an animal shelter to see if he can find a friend. This is a challenge as Krypto does not really know how to talk to non-super animals (parents will appreciate the Steve Buscemi “fellow kids” joke).

The shelter has quite an assortment: PB, a sweet pig (Vanessa Bayer), Merton, an amorous but near-sighted turtle (Natasha Lyonne), Chip, a high-strung squirrel (Diego Luna), Ace, a cranky dog (Kevin Hart), and ... Lulu, a hairless guinea pig (Kate McKinnon) who was once a lab test animal for none other than billionaire bad guy Lex Luthor (Marc Maron).

We all know that green kryptonite neutralizes superpowers of anyone from Krypton, and that's how Lex disables both Superman and Krypto. But when DC needs to think up a new threat for the Kryptonian superhero, yet another colored rock from the exploded planet comes in handy. There’s a veritable color wheel of kryptonite rocks in DC history with powers that inflict everything from temporary madness to cool dance moves to gender switches. This movie brings us orange kryptonite, which Lex believes will give him the same powers as Superman. It turns out that it only works on animals and its results are unpredictable.

So, when an orange kryptonite pebble hits the floor of the shelter, all the animals get super-ized. Krypto, who has never wanted to have a friend or teammate other than Superman, has to try to persuade the oddballs from the shelter to help him rescue Superman and his Justice League buddies: Batman (Reeves, hilariously on point), Wonder Woman (Jameela Jamil), The Flash (John Early), Aquaman (Jemaine Clement), Green Lantern (Dascha Polanco), and Cyborg (Daveed Diggs).

What do we need to show us the group getting control of their new superpowers? A training montage, of course, as the animals tell us. They need to master their skills and teamwork to rescue the Justice League from Lulu, who thinks she will endear herself to Lex Luthor by out-evil-ing him. Kate McKinnon joins the Phantom Zone-worthy Hall of Fame of supervillains as the tiny guinea pig (do NOT call her a hamster). Her voice is a fabulously wicked weapon of its own, with the flair of a classic-era Hollywood diva. (Think Tallulah Bankhead waving a cocktail and a looong cigarette holder).

Lessons about friendship and the unconditional love we get from and give to our pets are sweetly delivered in "DC League of Super-Pets." This vibrant film's action and comedy have all the zing that has bolstered our unconditional love for comics and superheroes on the brink of its second century. 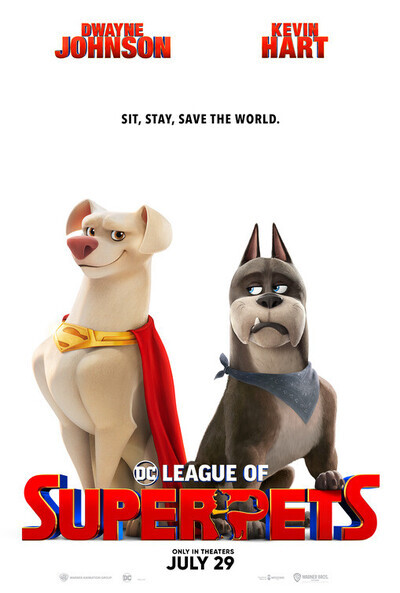