"The Dawn Patrol" is a stirring anti-war drama about the futility of battle set among a squadron of fighter pilots during World War I that has been done a couple of times—the 1930 version was directed by the great Howard Hawks and featured Douglas Fairbanks Jr. and Richard Barthelmass in the leads while the 1938 remake was helmed by Edmund Goulding and included a cast led by Errol Flynn, Basil Rathbone and David Niven. Although the 1938 version is better known, both takes are interesting (the Hawks version allows one to see him playing with ideas that he would come back to again throughout his career). Sadly, the similarly titled "Dawn Patrol" is an odious stew of murder, revenge, casual racism and overt misogyny that is all the worse because of its apparent celebration of those ingredients.

Scott Eastwood, last seen showing his pecs in "The Longest Ride," stars as a Marine named John. As the story opens, he is being marched across a desert at gunpoint while telling his attacker the story of how he wound up in this particular position. In the summer of 2008, he was an ordinary surf bum content to ride the waves off of Venice Beach with his brother, surfing ace Ben (Chris Brochu), and dad Trick (Jeff Fahey) while fighting off the Mexicans who dare to intrude their turf. Tensions are exacerbated when Ben's ex-girlfriend, Donna (Kim Matula), takes up with Miguel (Gabriel DeSanti), and he responds by drunkenly grabbing her away from Miguel and carting her down to the shoreline for what begins as a sexual assault and ends with a marriage proposal, while John smacks around Miguel a couple of times in the most low-key and apologetic manner possible.

Sure, this might leave you to think that Ben is a drunken jerk with rage issues but you would be wrong—he just wants to surf without having to deal with the surferazzi (yes, this is a term used in the film) or his pothead mother (Rita Wilson) who want to exploit his talents for money. Alas, not everyone is on his level of enlightenment because a couple of days later, he is found murdered on the beach. John is convinced that Miguel is responsible for the killing—he even saw the guy's car in the area just before finding the body—but when the police are unable to prove it or to even come up with his last name, John's grieving parents essentially demand that he "man up" and take matters into his own hands. After putting up what barely qualifies as token resistance, he goes about doing just that and, in news that will shock few of you, it all goes sideways from there.

"Dawn Patrol" is so rotten in so many ways that there is a temptation to look at it at first as some kind of demented deadpan spoof of films that celebrate grotesque macho codes above all else, and it is only with a gradual sense of horror that it becomes apparent that not only are we meant to take it seriously but that it thinks that it is saying something profound. The screenplay by Rachel Long & Brian Pittman is nothing more than a bunch of stupid incidents that make little sense, lead to a pathetically obvious surprise revelation and are presented via a flashback frame that is borderline torturous at times without adding anything of value to the proceedings. (Suffice it to say, director Daniel Petrie Jr. fails to lend the material the sort of élan or quiet dignity that he brought to such previous efforts as "Toy Soldiers" and "In the Army Now.")

The casual racism and sexism on display is oftentimes appalling, especially since the attitude it displays towards them suggests at least a tacit endorsement. (The characterization of Donna as a vapid and frequently topless tramp who exists solely as a sexual receptacle is particularly gruesome, all the more so considering that the screenplay was co-written by a woman.) There is not a single character in it that any sensible person would want to spend even the slightest amount of time with and none of the actors are able to make them into anything either. (Eastwood basically does the same thing he did in "The Longest Ride"—stare vacantly while shirtless—and his performance is the highlight.)

Look, if you want to see a film that serves as a cautionary tale about how the single-minded desire for revenge can have unexpected repercussions for everyone involved and utilizes smart writing, whip-smart direction, strong performances and a nice sense of irony, I have the perfect movie for you. It is "Wild Tales," the jaw-dropping Argentinian black comedy consisting of several vignettes involving people trying to get the best of those who have done them wrong. By comparison, "Dawn Patrol" should prove to be as welcome at the multiplex as washed-up medical waste is to a day at the beach. 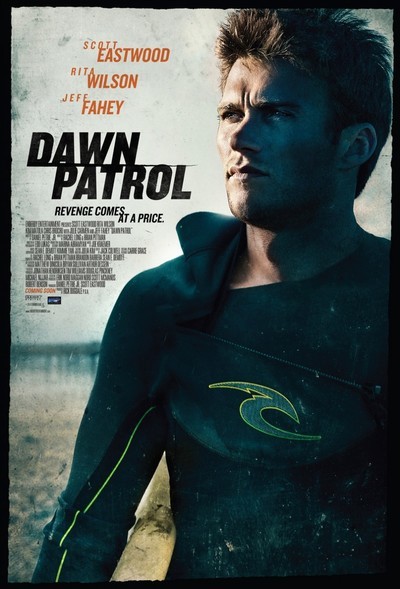