David Foster: Off the Record

“David Foster: Off the Record” is a tribute to the multi-Grammy winning songwriter and producer, as curated by the man himself, David Foster. Most people are celebrated by a documentary like this after they've stepped away from the spotlight; at the very least, these types of projects aren't usually made with the subject in the room. But from the get-go, Foster informs the documentary crew, and us, that "I'm going to be over your shoulder the whole f**king way." For a collaborator who is revealed to be a control freak in the studio, this is meant to be a joking character detail. But it’s more of a warning sign, that the upcoming tales of songwriting magic are about catering to Foster first and foremost, and that Foster might as well have been behind the camera anytime someone talks about how great he is.

This is a project about upholding and documenting legacy, of compiling Foster's greatest hits in one film, to show off the wonder of Foster's perfect pitch and musical intuition. In that way, director Barry Avrich is successful—it’s educational if you didn’t already associate the Canadian-born songwriter with producing Whitney Houston’s cover of “I Will Always Love You,” or credit him with helping to launch the careers of Michael Buble, Josh Groban, or Celine Dion. The film has some in-studio footage that might amuse fans of any of those particular names, though they zip by quickly as the documentary covers a lot of ground. In a testament to his talents, Foster's time writing for Earth, Wind & Fire (Foster wrote the chorus hook to "After the Love Has Gone") is simply summed up as "a three-album tear" before moving on.

It's a fact that Foster's chart-toppers have made more of an impact than most people in pop music, in a way that would be hard to calculate. To the point that when he says that Toni Braxton’s “Un-Break My Heart” (which he produced) is one of the greatest records of all time, you have to pause and seriously consider it. But in the first half of the movie especially, it's a lot of Foster talking about his own victories, like recording the 1981 Dreamgirls album with Jennifer Holliday, or the time he hit someone with his car, and it ended up saving the victim from an aneurysm. For all the incredible stories, there's something nearly disingenuous about the context—even if President Obama also had as many Grammy wins as Foster does, you would get weary of hearing simply flattering stories from the guy himself.

Foster has had an extraordinary career, and yet this documentary is far from that level. Its generic style doesn’t suggest awe or reverence, even if this cast has more star power than a lot of other ones about underrated musical forces (this week also saw the release of "Suzi Q.") The crew has to give Foster good lighting, which is really no different than what Michael Buble or Barbra Streisand were clearly set to do with their interviews of only unwavering praise. Every collaborator always brings their own stories of being pushed in the studio to the truth—eventually, Foster's insistence on multiple takes during strenuous sessions led to a hit. Yet while the doc might prove that his approach worked, it’s progressively tedious to revisit these hits through such a thick air of self-affirmation.

The only people who truly challenge Foster, who make his self-proclaimed status as an egomaniac and control freak a complex trait, are Chicago. Foster saved the band by giving them new ballads to play, a change that turned horn players into synthesizer musicians, and made Foster a co-writer on their songs. His redirection for Chicago lead to new hits, but also songs that weren’t true to their original sound. You can sense a tension when a few members of Chicago talk about it, and it provides a messiness that’s far more honest than stories behind the Grammy trophies on Foster's grand piano. There are far too many chosen moments that sound like miracles from a movie (a metaphor that Foster uses twice, to describe hearing Celine Dion and then Josh Groban for the first time), and not enough that play like they've been pulled from the messiness of making art with others.

Midway through the movie, Avrich takes long detours to topics about Foster's personal life, related to his complicated history with his multiple wives and his supportive daughters, or mentioning how these family dynamics were then put on-camera with trashy reality shows “The Princes of Malibu” and later “The Real Housewives of Los Angeles.” As some syrupy, minor-key piano plays in the background, these passages are a banal, abrupt departure from the previous music history. Foster is also so closed-off, while the documentary nonetheless collects compliments about him as a father and husband, that these moments have little depth and purpose.

It all becomes obvious toward the movie's end, in which Foster says that he doesn’t want to go to therapy, for fear of what will be uncovered. Stating that very trepidation is exactly when someone should leap into the wonders of therapy, but it's an obvious statement coming from Foster, who then says he prefers to let his emotions out on the piano. Foster's revelation here also says the quiet part of this documentary loud—instead of a therapist, he has a documentary crew who lets him recount the past, without the threat of challenging him. Foster has a golden gut when it comes to hits in music, but I think it'll be better for him when he realizes why this narrow documentary about his life is a big miss. 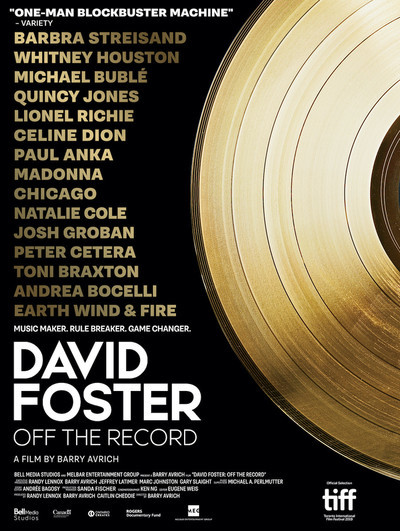 Paul Anka as Himself

Carole Bayer Sager as Herself

Andrea Bocelli as Himself

Michael Bublé as Himself

Peter Cetera as Himself

Kristin Chenoweth as Herself

Céline Dion as Herself

Amy Foster as Herself

David Foster as Himself

Erin Foster as Herself

Sara Foster as Herself

Josh Groban as Himself

Katharine McPhee as Herself

Stephan Moccio as Himself

Tommy Mottola as Himself

David Pankow as Himself

Lionel Richie as Himself

Barbra Streisand as Herself

Diane Warren as Herself